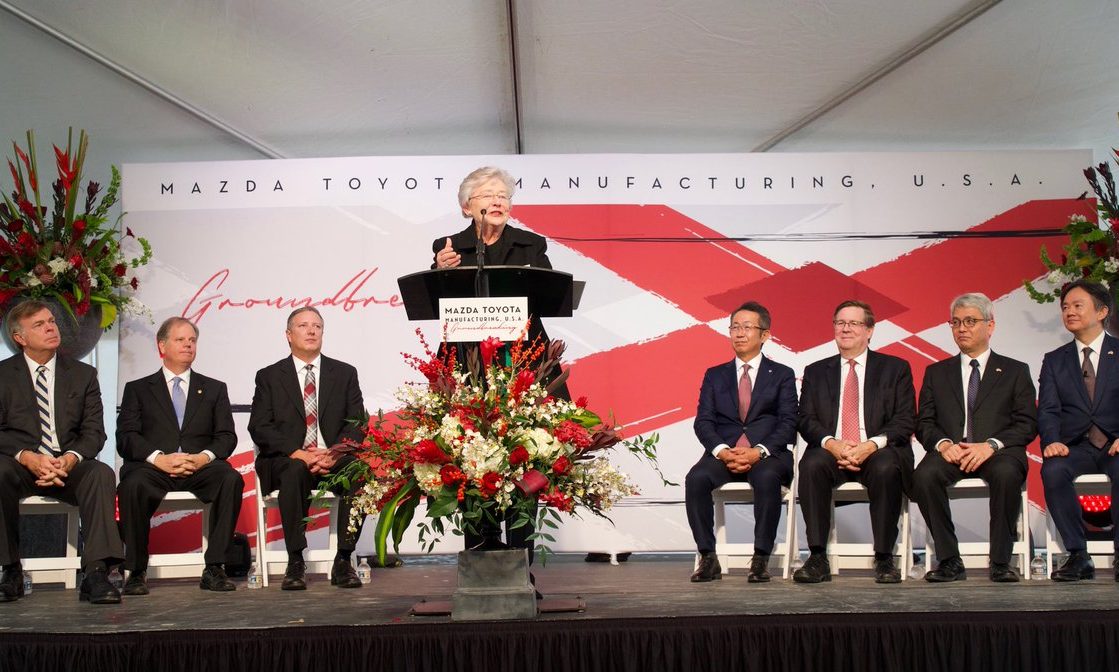 “Not only is Mazda Toyota Manufacturing providing high-paying jobs, they are investing heavily in our future workforce,” Gov. Ivey said. “This will not only benefit them, but also other manufacturers in the area. One thing I’ve learned with Toyota being in our state is that they care for the communities where they do business – it is, after all, their home, too. And they prove it every day. We are lucky to have Mazda Toyota expanding in Alabama.”

The massive new plant will have the capacity to build 300,000 vehicles. The plant will build both Toyota’s Corolla, whose all-new 2020 model was unveiled last week in California, and Mazda’s yet-to-be revealed crossover model.

“We are proud to be here with Toyota, with whom we share the bond of pride in manufacturing,” said Mazda’s senior managing executive officer Kiyotaka Shobuda. “We are proud to be breaking ground on a new ‘home’ here in Huntsville – a city that believes in the possibilities of technology and manufacturing, and has striven to realize mankind’s greatest dream.”
Economic Developer Nicole Jones told the Alabama Political Reporter, “Much has progressed with site prep since we sat in Montgomery for the official unveiling of the Mazda-Toyota joint venture manufacturing plant ten months ago. Folks are excited about the 4,000 job opportunities that await with global companies that consistently invest in their workforce and communities.”

The alliance will assure competitiveness in manufacturing, allowing both automakers to respond quickly to market changes and helping to ensure sustainable growth toward the future of mobility.

“It is extremely special to have a partner like Mazda to team up with not only to make the highest-quality cars, but also to create a plant that team members are proud to call their own,” said chief executive officer of Toyota Motor North America Jim Lentz. “As we’ve seen at our Huntsville engine plant, Alabamians are a proud, talented, hard-working group. We are excited to continue our deep investment in the U.S. and Alabama and see nothing but a bright future.”

Nicole Jones said, “Thank you to Akio Toyoda, President of Toyota Corporation, and Masamichi Kogai, President of Mazda, for investing in our state. Mazda and Toyota’s search was intense and included visits to 20 states within six weeks in 2017. Governor Kay Ivey, the Alabama Department of Commerce, members of the local delegation, and many people from the public and private sector collaborated to make ‘Project New World’ happen. And we all can recognize how monumental a project is when the President of the United States mentions it in his State of the Union Address!”

Also with the groundbreaking, MTMUS donated $750,000 to support STEM-related programs that will encourage and motivate students to pursue a career in the advanced manufacturing field. MTMUS has 4,000 jobs to fill and is committed to investing in developing its future workforce in collaboration with local educators and economic development partners.

Those donations include $500,000 to the Huntsville Madison County Chamber Foundation to launch a new career exploration online platform highlighting careers in manufacturing to students. The goal is to work with local school systems and promote this tool as a resource for career coaches and teachers.