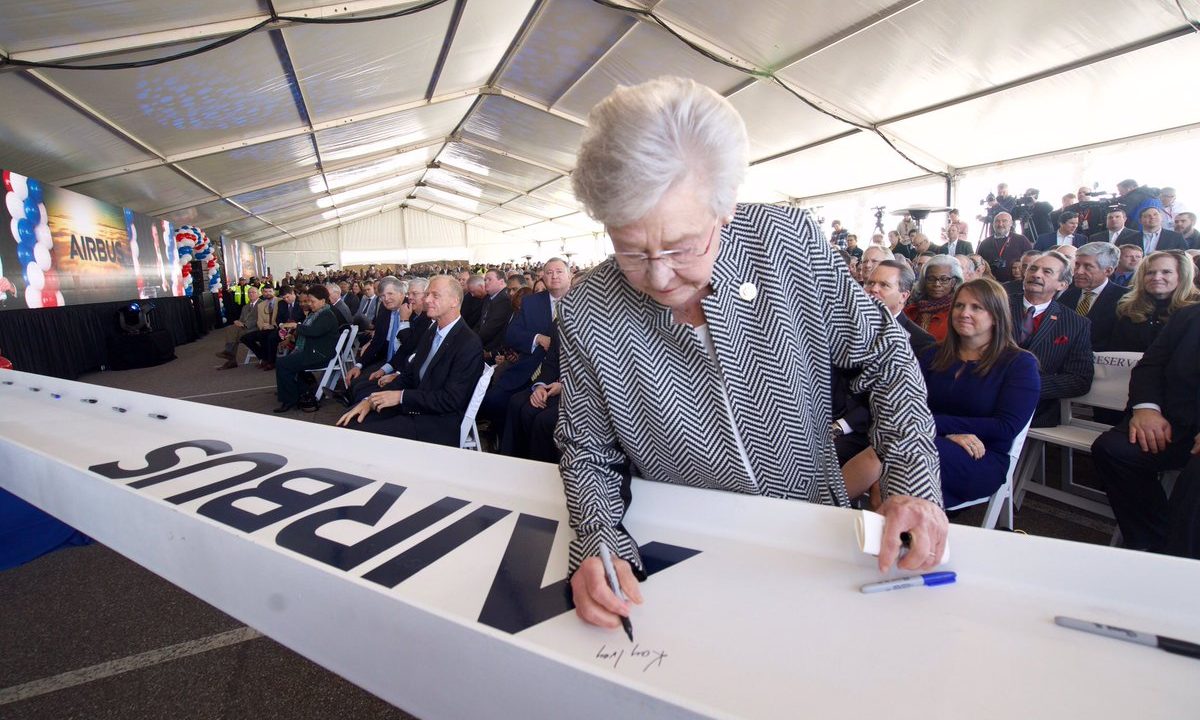 Alabama Gov. Kay Ivey joined leaders of Airbus, top local officials and others at the Mobile Aeroplex at Brookley Wednesday for a groundbreaking ceremony to launch construction of the company’s new A220 aircraft manufacturing facility.

Airbus already manufactures the A320 family in Mobile. The new assembly line will satisfy the strong and growing U.S. demand for the A220 aircraft. The A220 is the newest offering in Airbus’ commercial aircraft product line, and create more than 400 full-time jobs in Mobile.

“This is a great day for Mobile and for Alabama,” Governor Ivey said. “Airbus’ growth plans will not only create new jobs for Alabamians but also strengthen the bonds that have developed between the global aerospace company and our state. Alabama has a long history in flight and, as this project shows, a bright future in the aviation industry.”

Secretary of the Alabama Department of Commerce Greg Canfield said that the A220 assembly line project represents an important milestone for the state’s robust and expanding aerospace sector.

“Airbus’ decision to launch production of A220 aircraft at a new assembly line in Mobile will act as a powerful catalyst for sustained growth in an industrial sector that is key to Alabama’s future,” Secretary Canfield said. “Airbus’ expanding presence in the Mobile aerospace cluster will spark significant job creation and spur additional aerospace investment in the region for many years.”

Airbus manufactures the A320 family of aircraft in Mobile, as well as helicopters and satellites elsewhere in the U.S. It also operates an engineering center in Mobile, plus other facilities across the nation.

The Chairman and CEO of Airbus Americas, Jeff Knittel said that Airbus’ expansion in the United States reflects the company’s growing partnerships with customers, as well as with American supplier-partners, and the communities in which the company operates across the U.S.

“Our partnerships are growing again with the addition of an A220 manufacturing facility that will employ some 400 more employees at full rate,” Jeff Knittel said. “Together we’ve already put Mobile on the map in the world of global aviation, and together we are making a new mark for the future.”

Economic developer Nicole Jones told the Alabama Political Reporter, “Airbus’ latest expansion, the construction of a new A220 aircraft manufacturing facility in Mobile, demonstrates Alabama’s position as a global leader in the aviation and aerospace industry.”

“The A220 Family is the newest addition to the Airbus family of commercial aircraft, designed for consumers in the 100 to 150 seat market,” Nicole Jones added. “Crews will construct the A220 assembly line at the Mobile Aeroplex at Brookley, adjacent to the A320 production line already in operation. “

Aircraft production is planned to begin in third quarter of this year with the first delivery of an A220 assembled in Mobile scheduled for 2020. The new A220 production facilities will be complete by next year.

“Airbus has already announced significant news related to its current A320 facility in Mobile County,” Nicole Jones continued. “Within the past month, the company delivered its one hundredth (100th) made in Alabama plane to Frontier Airlines. Folks looking for employment should take note that Airbus plans to add new jobs this month (January 2019) and approximately 600 jobs over the next 18 months.”

Alabama is rapidly becoming a major global for aerospace research and aircraft production.

“Business analysts predict that by 2023, Alabama will be number 4 or 5 in the world for the production of commercial aircraft,” Nicole Jones concluded. “This is a testament to teamwork and strategic partnerships between the public and private sector as well as the quality, dedicated, and skilled workforce Alabamians provide and companies need. Alabama has a history of leadership in aerospace and aviation, and Airbus is an international pioneer in the industry. We are thankful to the team at Airbus for their continued commitment to our state, nation, and the world.”