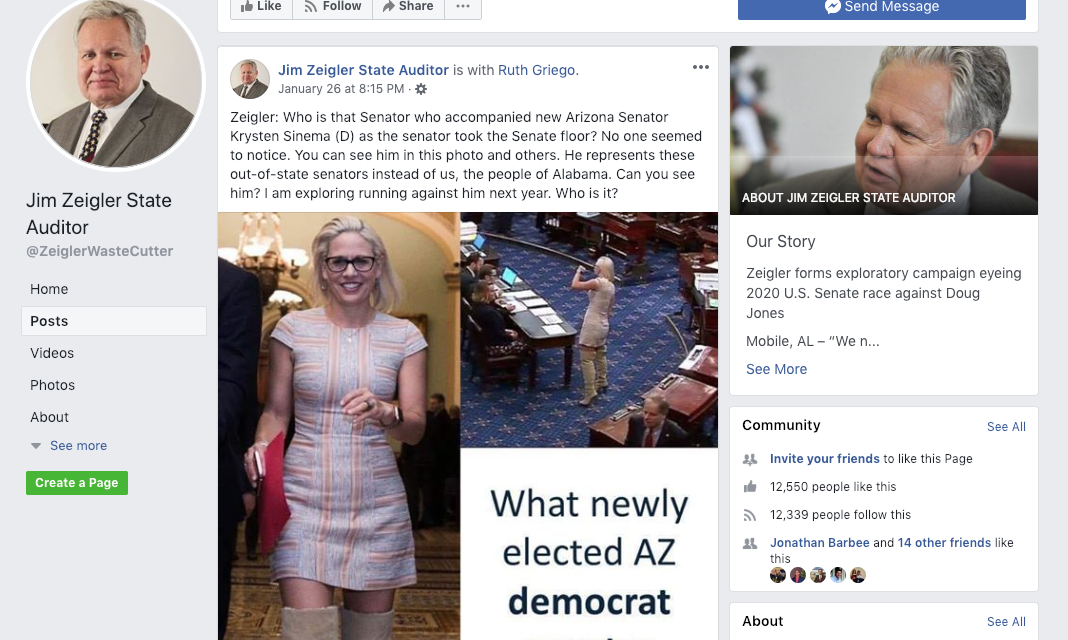 On Monday, Republican State Auditor Jim Zeigler, who is considering a run for U.S. Senate in 2020, defended his decision to post a Facebook status that targeted a newly elected female senator’s attire after facing backlash for the controversial post.

The status, which Zeigler posted to his public state auditor campaign page over the weekend, includes photos of Arizona Sen. Kyrsten Sinema, a Democrat, in the halls of the U.S. Capitol and on the floor of the Senate.

After the backlash, he removed that part of the post. He also removed a reference calling Sinema an “out-of-state looney tune.” 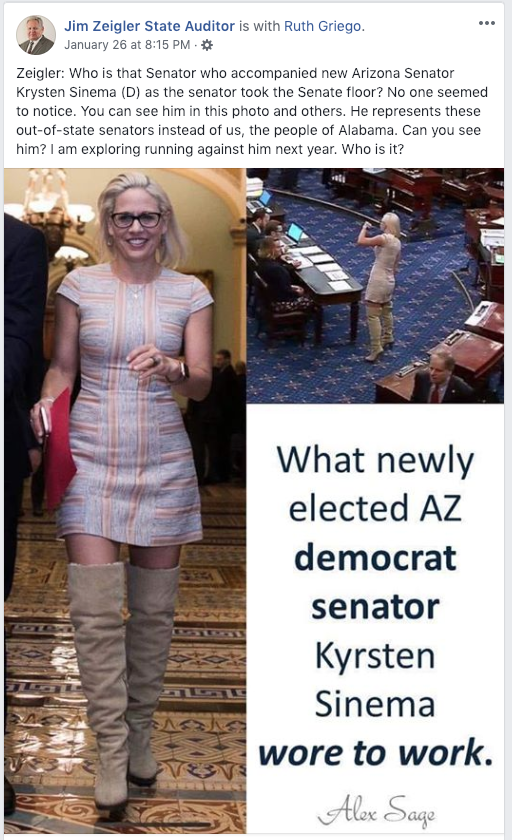 Zeigler said he regularly edits his posts for clarity and to “eliminate a distraction.”

“This was a post about Doug Jones,” Zeigler said. “And interestingly, it never said the words ‘she’ or ‘her’ if you look in it.”

The state auditor — known for his flashy ties, colorful suits, outspoken nature and opposition to former Gov. Robert Bentley — said Monday that the post was about Alabama Sen. Doug Jones, not Sinema, despite the fact that the photo he shared directly names Sinema.

Jones is only visible in the bottom corner of one the two photos of Sinema on the floor of the Senate, along with other Senate colleagues. Zeigler said Jones “accompanied” Sinema to the floor and “no one seemed to notice.” 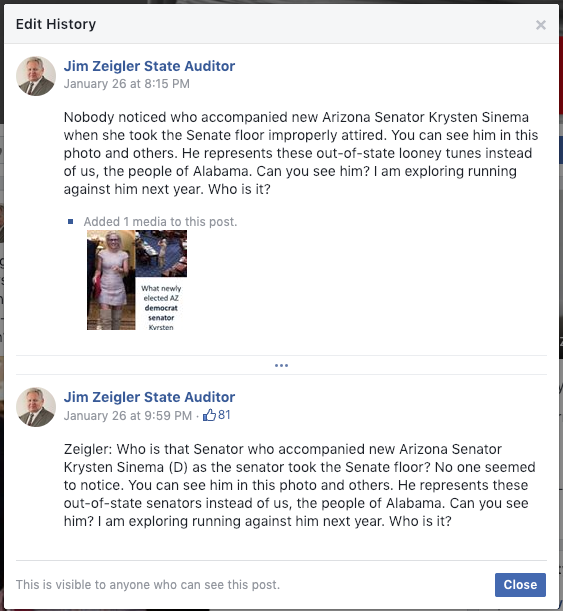 “So you choose to shame her and BEG others to see that Jones is literally at the bottom of the pic…walking…not even looking at her… you are desperate…and miserable sir.. stop trying to build a story,” another wrote.

“She has a law degree, a Masters, and a Ph.D. She can wear whatever the hell she wants. And so can we,” another said.

Others posted vulgar comments comparing Sinema to a sex worker or an exotic dancer. Some simply said her dress was unprofessional.

Zeigler addressed the post at a press conference in his office Monday after he announced a proposed alternative to GOP state lawmakers’ proposal to raise the state’s gas tax to fund infrastructure investment.

“In the picture, you can see Alabama Sen. Doug Jones,” Zeigler said. “I have a collection I’m building of Doug Jones photos.”

“The wording of my post was Doug Jones does not represent the people of Alabama, he represents the out-of-state senators,” Zeigler said. “I’ll continue to draw that distinction.”

Zeigler said he tried to remove some of the more explicit, “inappropriate” comments, but they came too fast for him to remove.

“I can’t control the commenters or profanity or sexual innuendo,” Zeigler said. “I’ve been attempting to delete those.”

But a number of the explicit comments still remain on the post, which received 1,700 comments as of Monday night. It had been shared more than 180 times.

The state auditor, who is responsible for keeping an inventory of state property, didn’t apologize for the post. Instead, he said he should have waited until after his press conference Monday to post the photo.

“A picture is worth a thousand words. I think you print journalists have figured that out,” Zeigler said. “I got a lot of response, positive and negative, on that post. I think I made a mistake and should have held it until Tuesday to not distract from this very substantive release of ‘Plan Z.’ Other than that, it got a lot of attention.”

Zeigler has said he is in the process of exploring a plan to run against Jones for Senate during the 2020 election. A number of other Republicans, including U.S. Rep. Bradley Byrne, are also considering a run.

Voters re-elected Zeigler to a second term in November by wide margins. He’s drawn criticism in the past for downplaying the allegations against former Republican Senate candidate Roy Moore by comparing them to the biblical Joseph and Mary.

Zeigler’s press conference Monday was intended to mount an opposition against the plan to raise the gas tax. The “Plan Z” Zeigler proposed at the press conference includes saving $63.5 million a year for highway funding that has been previously diverted to the state’s court system.