On the day we celebrate love, we also must commemorate a devastating anniversary, the first since the mass shooting last year at Marjory Stoneman Douglas High School in Parkland, Fla.

Sadly, in the year since the Parkland shootings, 1,200 kids age 18 or younger have been killed by gun violence in the United States, reports Axios. “The victims were killed during school shootings, armed domestic violence, drug homicides, unintentional discharges, and stray bullets,” Axios’ Zach Basu writes.

Let that sink in. At least 1,200 kids killed by guns in one year, often through violent intention. That’s at least 100 dead children a month. Three or four killed children a day.

Every day: three or four kids.

And some people don’t believe we have a gun problem in this country.

Congress still hasn’t taken any significant action on gun violence or on gun control. Some states (not Alabama) have tightened the screws on small issues – the age one can purchase a firearm, for example. The Trump administration banned bump stocks, devices that basically turn a semi-automatic rifle into a fully automatic machine gun.

With Democrats now in charge of the U.S. House, there’s renewed talk about universal background checks before gun purchases and other weapons limits. The vast majority of the public wants this. But most Republicans, controlled by the National Rifle Association, don’t. The NRA’s money matters more to them than children.

Sad truth is, we wouldn’t even have taken the limited steps we have on gun control without the grief the Marjory Stoneman Douglas students experienced.

Because this time, many students at MSD said no more. They banded together and started the March for Our Lives movement, and that movement still is running strong. March for Our Lives spread to chapters in all 50 states, and even to other countries. 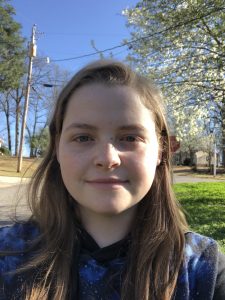 Alabama has chapters across the state, but the strongest, most active is March for Our Lives Birmingham, cranked up by Montevallo University first-year Ashley Causey when she was a senior at Helena High School.

Causey and other students around the city raised the money and put in the time to organize a march attended by thousands. And tonight, March for Our Lives Birmingham, in partnership with Moms Demand Action, are holding a candlelight vigil at Highlands United Methodist Church to, as Causey says, “honor the victims and survivors of the Parkland shooting, but also to recognize those in our own community affected by gun violence.”

Indeed, less than a month after the Parkland mass shooting, 17-year-old Courtlin Arrington was killed by a classmate at Huffman High School in Birmingham. There have been other kids killed by guns in Alabama over the past year.

And across America? A hundred a month.

After being graduated from Helena, Causey decided to attend Montevallo, where she is majoring in social work and political science. She remains at the helm of March for Our Lives Birmingham.
Causey remembers the mass shooting last year that led this already activist teen to even more involvement.

“I was at work, but didn’t actually hear anything about the shooting until I got home that night,” Causey says in an interview by e-mail with Alabama Political Reporter. “My cousin, sister, and I all sat in my sister’s bedroom as we read more about it, and my heart broke.

“I got involved because I believe this is an issue that affects absolutely everyone, no matter age, race, sexuality, gender, religion, and especially political party and beliefs,” Causey says. “I wanted Birmingham to participate in having a march, and when I didn’t really see anyone starting a march here, I worked with others to officially start one.”

The Birmingham event last March featured speakers and thousands of marchers, along with a special recognition and remembrance of Courtlin Arrington, who had planned to become a nurse.

As horrible as the Parkland and other mass shootings since then are, Causey sees progress at least in more awareness of gun violence over the past year.

“So much has changed since Parkland,” Causey says. “The way we talk about guns, the views of youths, and youth involvement, have thankfully evolved for the better in this past year.”

And don’t forget the midterm elections, where Democrats – and many of them women – stormed the House of Representatives, taking over and starting new, refreshing conversations.

“I’m so thankful for the strides that were made during this election,” Causey says. “More women in Congress than ever before in our history, along with diverse and different ethnicities and religions. It is slowly reflecting what America is actually like, but we still have a long way to go.”

There is no doubt, Causey says, that March for Our Lives “definitely contributed to this election.”

“It’s not a coincidence that this was the highest youth voter turnout in many decades,” Causey said. “Although this is not the only cause, March for Our Lives’ dedication to voter education, voter accessibility, and the rallying of youths to go to the polls no doubt had a huge effect. It has been one of the main goals since Day One, and I think all of the chapters have done a great job of encouraging people to go out and vote.”

Causey says that March for Our Lives Birmingham will “continue to operate and execute/promote events and legislation that aims to tackle gun violence issues. We hope to grow our involvement even more in the future.”

We often hear, following a terrible tragedy, that something good will emerge. Sometimes it does; more often than not, it doesn’t.

But the young survivors of the Parkland shooting certainly are different, and their energy to get something done spread across the nation. That energy continues, and it isn’t likely to disappear, as this first anniversary of the MSD shootings proves.

Those teens and young adults, and others across the land like our own Ashley Causey and her crew, are making sure that last year’s Valentine’s Day Massacre remains a force for profound change.

It is certainly that. And here to stay.