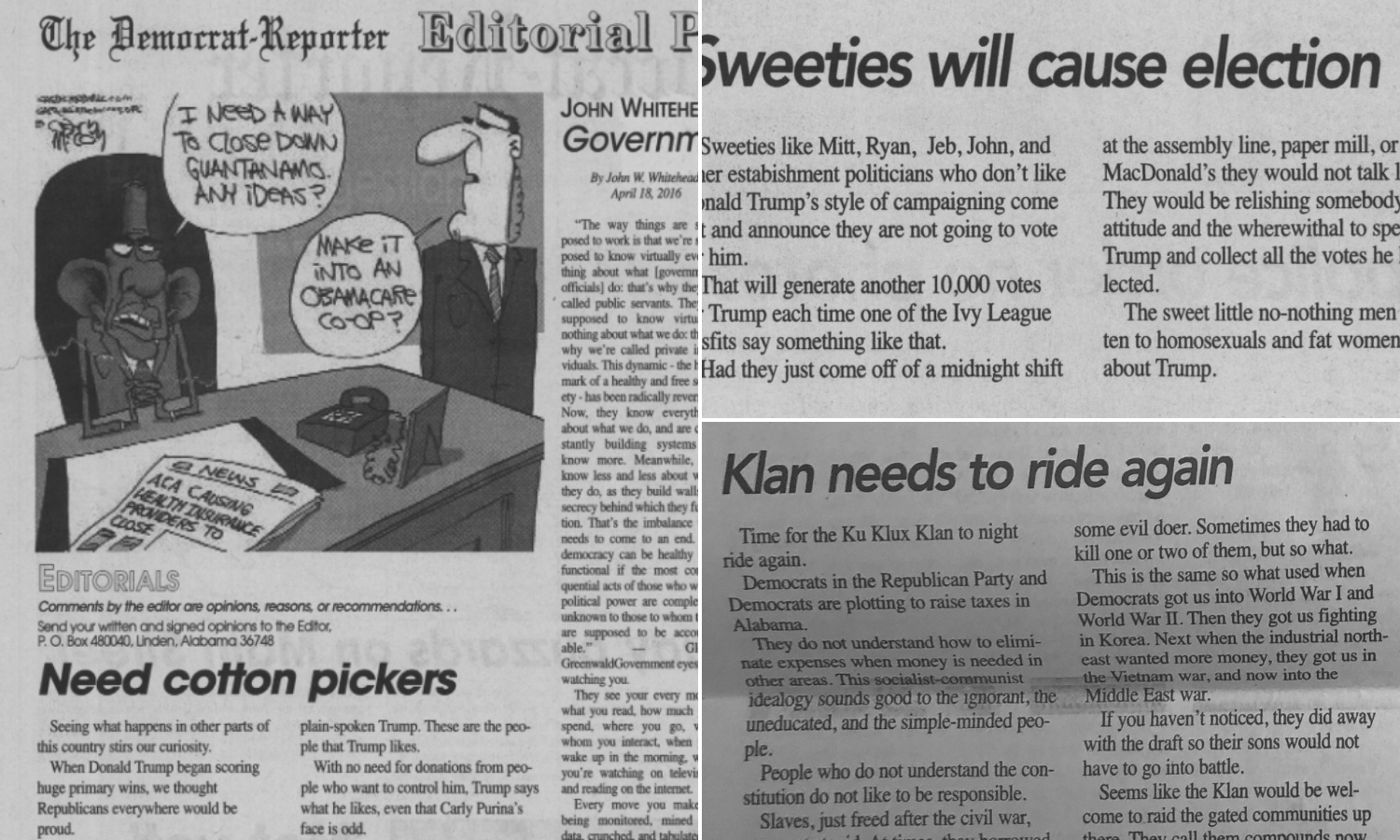 The same editor who penned an editorial calling for the resurgence of the Ku Klux Klan and elaborated on those views by calling for lynchings of Democratic politicians has a long track record of penning racist, homophobic and sexists editorials in his small-town newspaper.

The Democrat-Reporter, a community newspaper in West Alabama, published the editorial on Feb. 14 entitled “Klan needs to ride again.” In it, the paper’s editor, Goodloe Sutton, called for the Klan to “raid the gated communities” of Democrats and “Democrats in the Republican Party” who are “plotting to raise taxes in Alabama.”

I posted a copy of the story on Twitter yesterday. Fellow APR writer Mikayla Burns and I found the editorial in a print copy of last week’s issue of the paper. Burns works with me at The Auburn Plainsman.

Sutton’s editorial immediately drew ire, and he is facing calls to resign over the content he published in the editorial.

“For the millions of people of color who have been terrorized by white supremacy, this kind of ‘editorializing’ about lynching is not a joke – it is a threat,” Rep. Terri Sewell, D-Alabama, tweeted Tuesday. “These comments are deeply offensive and inappropriate, especially in 2019. Mr. Sutton should apologize and resign.”

“The rhetoric displayed by the Democrat-Reporter is disturbing, disgusting, and entirely unacceptable. I urge the newspaper to issue an apology and the publisher to resign from his duties. We cannot tolerate this sort of repulsive speech, particularly from our fourth estate.”

Sutton has often been praised for keeping up a small-town, family newspaper and for investigative reporting that unearthed corruption at the Marengo County Sheriff’s Department. That story won numerous awards and received national acclaim.

But after a review of dozens of issues of The Democrat-Reporter, it’s clear the racist editorial last week was not a one-off event. It’s common.

The paper, published in the small town of Linden, Alabama, has a history of publishing a wide range of offensive editorials. The racist, sexist and homophobic content runs the gamut from a 2018 defense of an Alabama student who used the n-word to a piece in 2016 entitled “Need cotton pickers.”

The editorials appear to be more the racist ramblings of a single man rather than the thought-out opinion pieces that normally grace the columns of newspaper editorial pages.

After I posted a photo of the editorial on Twitter, The Montgomery Advertiser called Sutton for comment. He confirmed he wrote the editorial. He went further, falsely claiming former slaves were among the members of the Klan. And further still, suggesting the revived Klan could “clean up D.C.” by lynching Democratic leaders.

“We’ll get the hemp ropes out, loop them over a tall limb and hang all of them,” he told the Advertiser. He went on to compare the KKK to the NAACP, saying, “The Klan wasn’t violent until they needed to be.”

I’ve contacted Sutton and the paper for comment but haven’t heard back.

The University of Southern Mississippi said in a statement that Mr. Sutton has been removed from the school’s Mass Communication and Journalism Hall of Fame.

“The School of Communication strongly condemns Mr. Sutton’s remarks as they are antithetical to all that we value as scholars of journalism, the media, and human communication,” the statement read. “Our University’s values of social responsibility and citizenship, inclusion and diversity, and integrity and civility are the foundation upon which we have built our School and its programs.”

One needn’t look far back into the paper’s archives to find similarly offensive content.

In a 2013 editorial condemning former State Sen. Hank Sanders and State Rep. Alvin Holmes with the title “Hank, Alvin continue racial hatred,” Sutton wrote that “Slavery was a good lesson for the Jews. They didn’t act right, so God punished them by letting others conquer and enslave them.” He went on, “There are stories which publishing companies won’t print about how the black people were banished into the wilderness of Africa because God hated them. They had no word in their language for love. They did have seven words to describe how to kill an unborn baby. (Reminds us of America today).” Parenthesis retained. 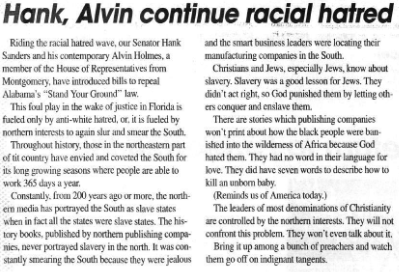 In another editorial, Sutton wrote that President Donald Trump should “do like Dems” and pay off black leaders to get what votes he can. He wrote that black voters would be upset about the discontinuation “free food stamps, disability checks, crazy checks, baby checks, low rent and no rent housing, free health insurance, free General Motors cars and trucks, and a lot of other stuff that we the public do not know anything about.” So, he wrote, Trump should pay off black leaders and “get what votes he can.” 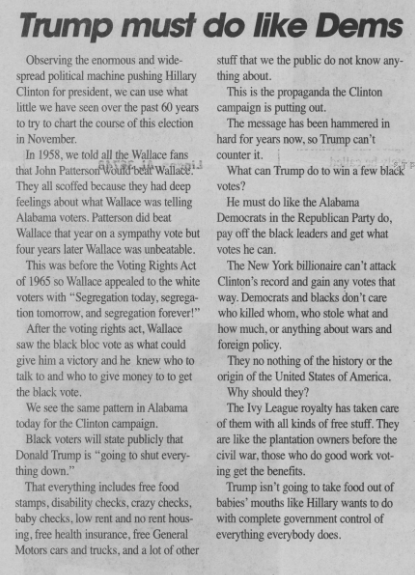 In a July 2018 editorial, he wrote “Had a Ku Kluxer lit in on Barack Obama like Maxine Waters has attacked Donald Trump, the establishment would have beat its plow shares back into swords and ravished the South again. … [Waters] was not taught how to respect anything other than some African or Democrat.”

Racism is not the only content that has made its way into the Democrat-Reporter over the years, Sutton has called for public hangings and bombing Muslims, written anti-Semitic tropes and advocated for a return to the times when women weren’t allowed to speak in church.

In another, he called former Secretary of State Hillary Clinton a “fat witch (or female dog) who wants to be the first woman president.” Parenthesis retained. 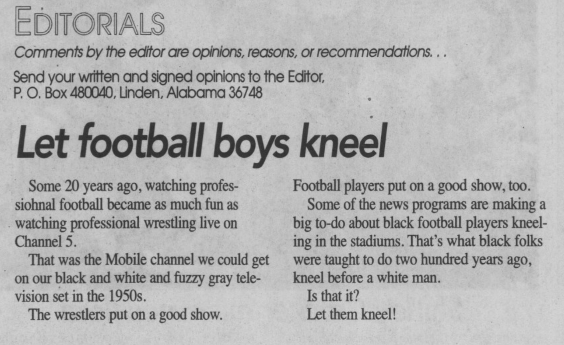 Sutton has written a number of editorials that used racist language while criticizing black NFL players. In a 2017 editorial, he wrote, “Some of the news programs are making a big to-do about black football players kneeling in the stadiums. That’s what black folks were taught to do two hundred years ago, kneel before a white man. … Let them kneel!”

And the offensive content isn’t just limited to the opinion page.

The paper isn’t published online, only in print, so it’s no surprise this content hasn’t made headlines outside the borders of Marengo County. The paper only had a circulation of a few thousand copies a week in 2015. Following industry trends, it’s likely dropped more since then.

He went on, “This gives a lot of credence for Peter writing that women should not be allowed to talk in church.”

He’s attacked members of the LGBT community, too. In 2015, he pitted LGBT people against the black community by accusing gay people of “taking the spotlight away from the blacks who wanted to march across the Pettus Bridge in Selma.”

“Of course, women appreciate the effeminate appeals of those who are closely aligned with their own way of thinking,” Sutton wrote, arguing gay men have had outsized influence over western art and culture.

In a 2016 editorial, he criticized Republicans as “sweet little no-nothing men who listen to homosexuals and fat women complain about Trump.” 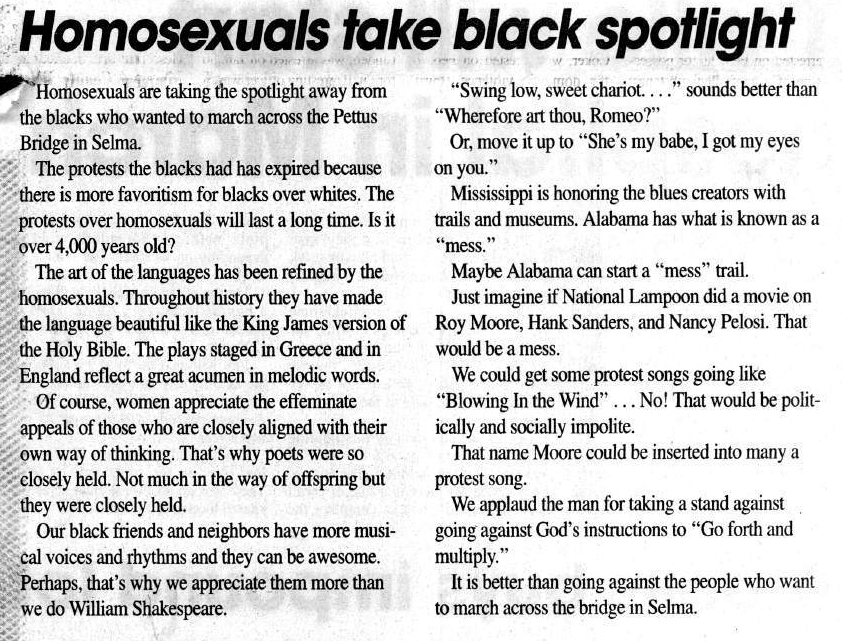 The Alabama Political Reporter published a story last year in which several former employees of the Anniston Star accused H. Brandt Ayers, the then-chairman of the newspaper’s board and its former publisher, of sexually assaulting them decades ago.

After we broke that story, Sutton took notice.

He wrote a month later in February, “Noticed last week a newspaper friend got alleged as assaulting female employees.” The title of the story: “Don’t even get close to women.” He continued, “When a woman tempts a man and he doesn’t snap up the bait, the woman gets upset and speaks disparagingly of the man. Should he accept her invitation, he can later be allegedly guilty of sexual assault.”

Sutton has been at The Democrat-Reporter since 1964. He inherited it from his father. He has worked there for years as the editor-publisher, meaning he both owns the paper and manages its editorial content. The Sutton family has operated the paper since 1917.

He and his late wife, Jean Sutton, have received awards from the Society of Professional Journalists and the Hugh M. Hefner First Amendment Award for their stories on the Marengo County sheriff. In 2007, he was inducted into the University of Southern Mississippi’s Mass Communications and Journalism Hall of Fame.

In 2009, he received the Distinguished Community Journalist Award from Auburn.

The chair of Auburn’s Journalism Advisory Council said Tuesday its members voted by email today to strip the award. The same award was given to Ayers and has since been removed from the school’s website.

The University of Southern Mississippi also responded quickly to the coverage.

“Within the last few hours, the School of Communication at the University of Southern Mississippi learned of Mr. Goodloe Sutton’s call for violence and the return of the Ku Klux Klan,” their statement read. “Mr. Sutton’s subsequent rebuttals and attempts at clarification only reaffirm the misguided and dangerous nature of his comments.”

Linden is home to less than 2,000 people, and its demographics are essentially split between African-Americans and whites.

“He’s been making those kind of racist epithets for a long time,” Singleton said.

The Alabama Press Association has censured Sutton and suspended his paper, The Democrat-Reporter. The association may vote at its next meeting on expelling the paper from the group.

Jones tweeted the editorial was “disgusting” and Sutton should resign now.

OMG! What rock did this guy crawl out from under? This editorial is absolutely disgusting & he should resign -NOW!

I have seen what happens when we stand by while people-especially those with influence- publish racist, hateful views.