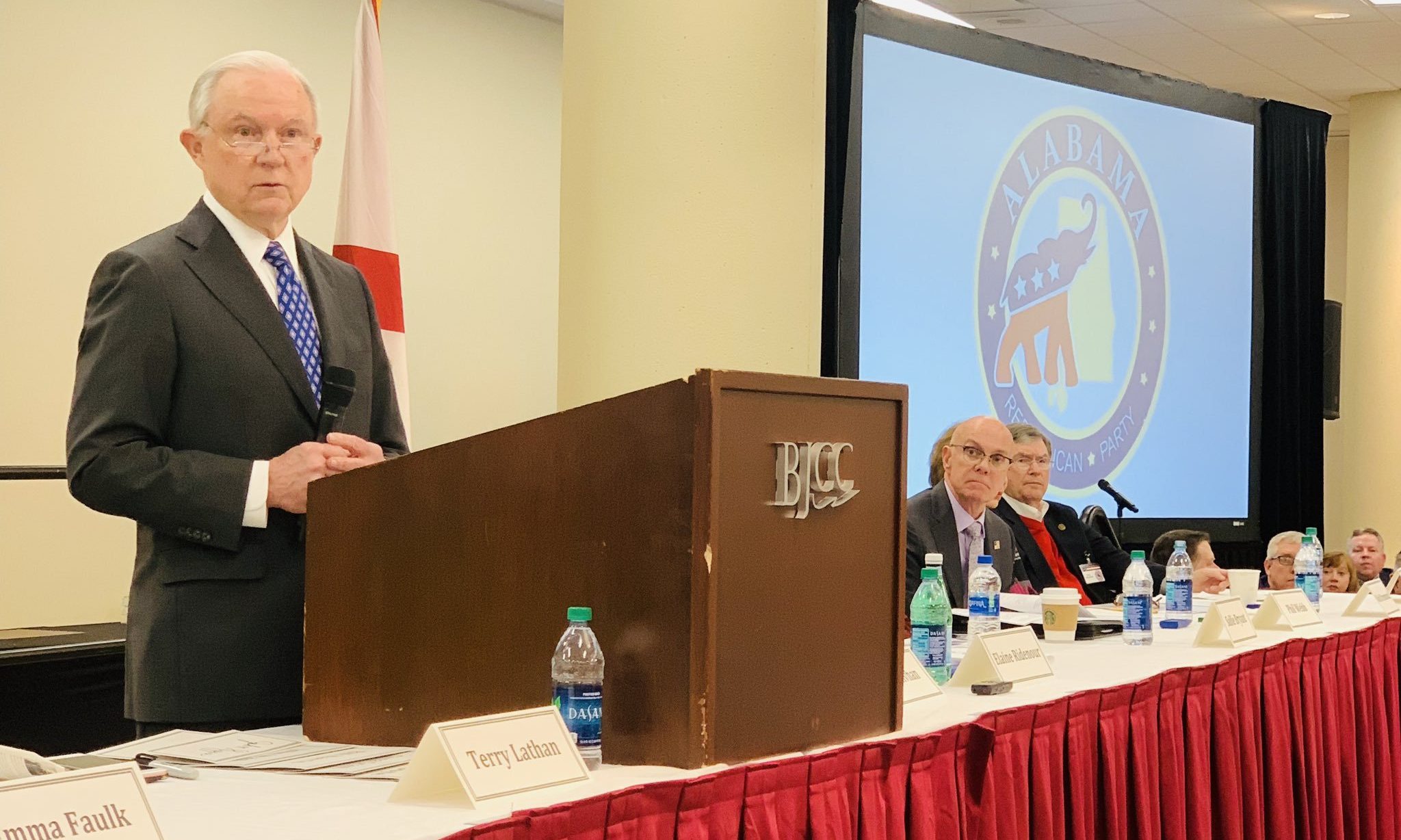 Sessions said that Trump was fighting to keep his promises to the American people and he has fought the media elites to do it.

“The media elites seem to think that we can’t challenge their agenda,” Sessions said.

Sessions said that Trump has reduced taxes, reduced regulations, and he credited Trump’s trade policies for the reopening of U.S. Steel’s Fairfield Works.
The best series of judicial appointees that this country has ever did

We soon will be energy independent and we are now the largest oil and gas exporter in the world, Sessions said. “This means we are not sending $billions of dollars to Venezuela and Saudi Arabia; but we are keeping it here.”

Sessions said that under Trump our allies are now paying their fair share for their defense.

I felt early on that we wouldn’t have won this election (206) without a strong candidate Sessions said.

Sessions acknowledged the end of his term as U.S. Attorney General.

“A lot of people get fired. My firing was a little more public than most,” Sessions said,

There were only two members of the legislatures they could caucus in a phone booth
It was an honor and a privilege to be elected as Alabama Attorney General as your U.S. Senator and as U.S. Attorney Genera

Sessions said that he was very proud of what he accomplished while he was Attorney General.

“No cabinet department did more to advance the Trump agenda than the Justice Department,” Sessions said.

Sessions said that he worked to make the DOJ less political. “It was time to end the politicization of the Department of Justice.”

Sessions said that he implemented a freedom of religion policy while he was attorney general and the DOJ assisted the cake baker who had been targeted by gay agenda extremists.

“And the Cake baker won that case before the Supreme court,” Sessions said.

“There was a feeling out that that the Obama Administration did not support the police and what they were doing out there,” Sessions said.

“We have got a host of problems,” Sessions said. “Congress needs to help the President more.”

Sessions and his wife Mary were credited for all that they did for the Alabama Republican Party, from founding the first college Republican chapter at Huntingdon College, to Sessions Chairing the party, serving as Alabama Attorney General, and then as U.S. Senator.

Alabama Republican Party Chairman Terry Lathan announced that there was going to be an endowed scholarship in honor of Jeff Sessions at Huntingdon.

The 550 members Alabama Republican Party Executive meets twice a year: for the annual Winter meeting and the annual summer meeting.

The Winter Meeting was in Birmingham and the Summer Meeting will be in Auburn on August 23 and 24.

Sessions said in closing, “William Buckley said that the Republican Party is the single institution that is capable of preserving this country and I believe that is true.”