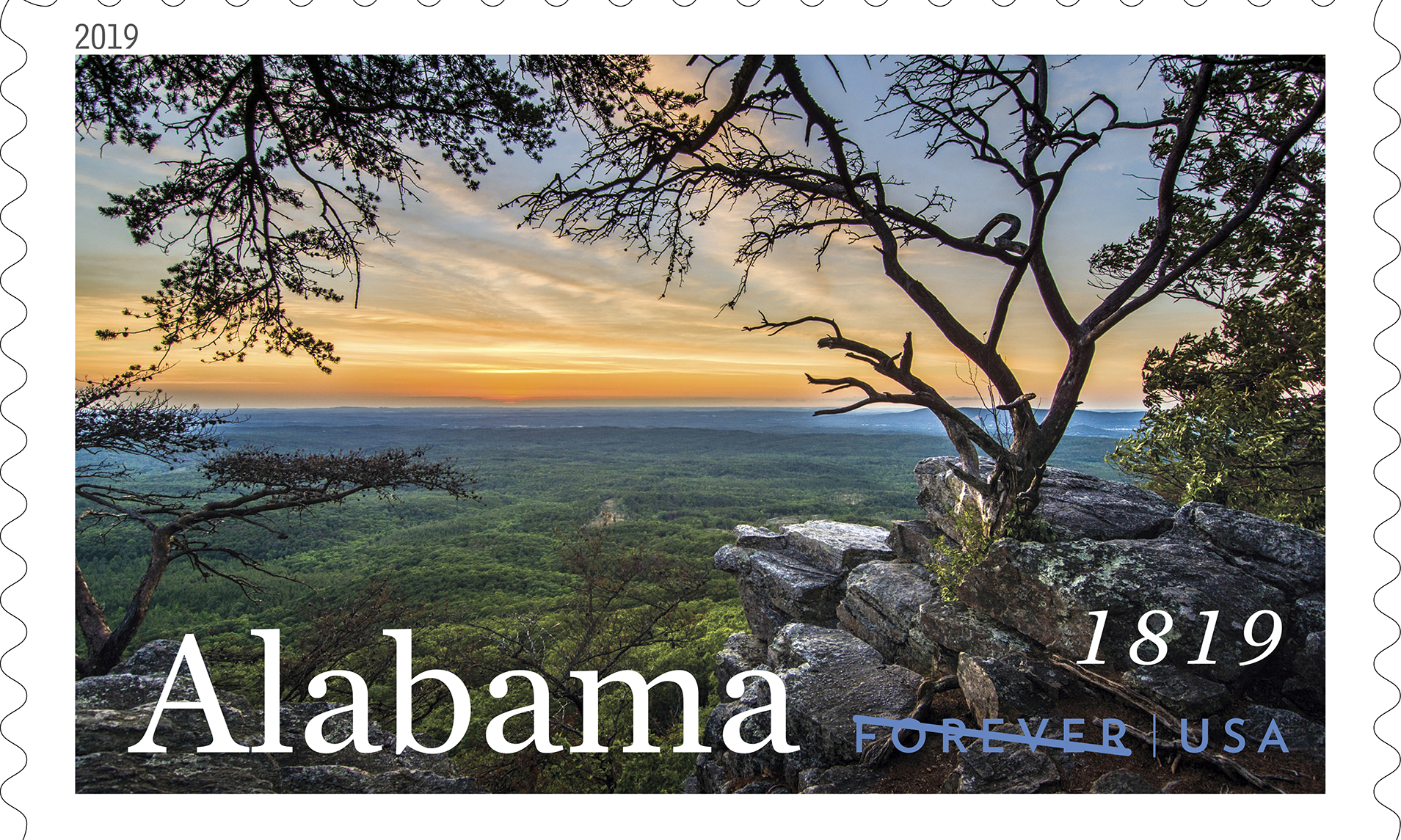 Saturday, the U.S. Postal Service commemorated Alabama’s bicentennial and entry as the 22nd state in the union. The USPS unveiled the Alabama Statehood Forever stamp during the Alabama200 ceremony at the EarlyWorks Children’s Museum in Huntsville.

“Since becoming America’s 22nd state on December 14, 1819, Alabama has built a rich history grounded in the diversity, tradition and hard work of its people, and the natural beauty and wonderment of its land,” said USPS Acting Chief Human Resources Officer Isaac Cronkhite, who officially dedicated the stamp. “Alabama has been pivotal in the growth of our nation to constantly strive to be a more perfect union.”

The Alabama Statehood Forever stamp features an existing photograph taken at sunset in Cheaha State Park on May 28, 2017. Alabama photographer Joe Miller shot the picture from the park’s Pulpit Rock Trail, and Pulpit Rock is visible in the foreground. Greg Breeding designed the stamp with Art Director William Gicker.

Joe Miller said, “It was an exciting morning for me today with the first day issue ceremony of the Alabama Statehood Stamp in Huntsville. There were a lot of folks there including several state legislators. Never in my wildest dreams would I think that one of my photos would be on a postage stamp!”

Rain and flooding in north Alabama over the weekend caused the event planners to move the ceremony from Constitution Village across the street to the Early Works Children’s Museum. Several attendees walked to the Constitution Hall Park after the event adjourned.

“I enjoyed taking part in this morning’s unveiling of Alabama’s Statehood Forever Stamp in commemoration of our state’s bicentennial at Huntsville’s Early Works Museum,” Congressman Mo Brooks said on social media. “The State of Alabama’s original constitution was signed in 1819 in Huntsville so it is a fitting location for the unveiling. I look forward to more events marking our great state’s bicentennial throughout 2019.”

“This weekend I was in Huntsville for the unveiling of a commemorative stamp featuring Mt. Cheaha to celebrate Alabama’s 200th birthday,” Del Marsh said.

Economic developer and historian Nicole Jones said, “It was an honor to be at home this morning with friends from around our state for the Alabama Bicentennial Stamp – First Day of Issue Ceremony. Constitution Village is a special place for our family. I have walked by the site where our state became a state almost daily since I was a little girl and now continue the tradition with my son and daughter. This historic area of town fit today’s occasion perfectly. Thank you to all who coordinated this special day.”

Speaker of the House Mac McCutcheon said on social media, “Over the weekend, Debora Kennedy McCutcheon and I enjoyed celebrating the unveiling of the Alabama Bicentennial Forever stamp. We were honored to be present with community and state leaders at Alabama Constitution Hall Park to witness such a wonderful time in our state.”
Huntsville was the site of Alabama’s First Constitutional Convention.

News of the Alabama Statehood Forever stamp is being shared using the hashtags #AlabamaStamp and #Alabama200.

The natural and diverse beauty of the state can be experienced in its many state parks. Alabama boasts 38 national historic landmarks, a national nature preserve, four national forests, eleven national wildlife refuges, a national military park, and a national heritage area.

USPS customers may purchase the Alabama Statehood Forever stamp at The Postal Store at usps.com/shop, by calling 800-STAMP24 (800-782-6724), by mail through USA Philatelic, or at Post Office locations nationwide. Forever stamps will always be equal in value to the current First-Class Mail 1-ounce price.
A video of the ceremony will be available on Facebook.com/usps.

The Postal Service receives no tax dollars for operating expenses and relies on the sale of postage, products and services to fund its operations.