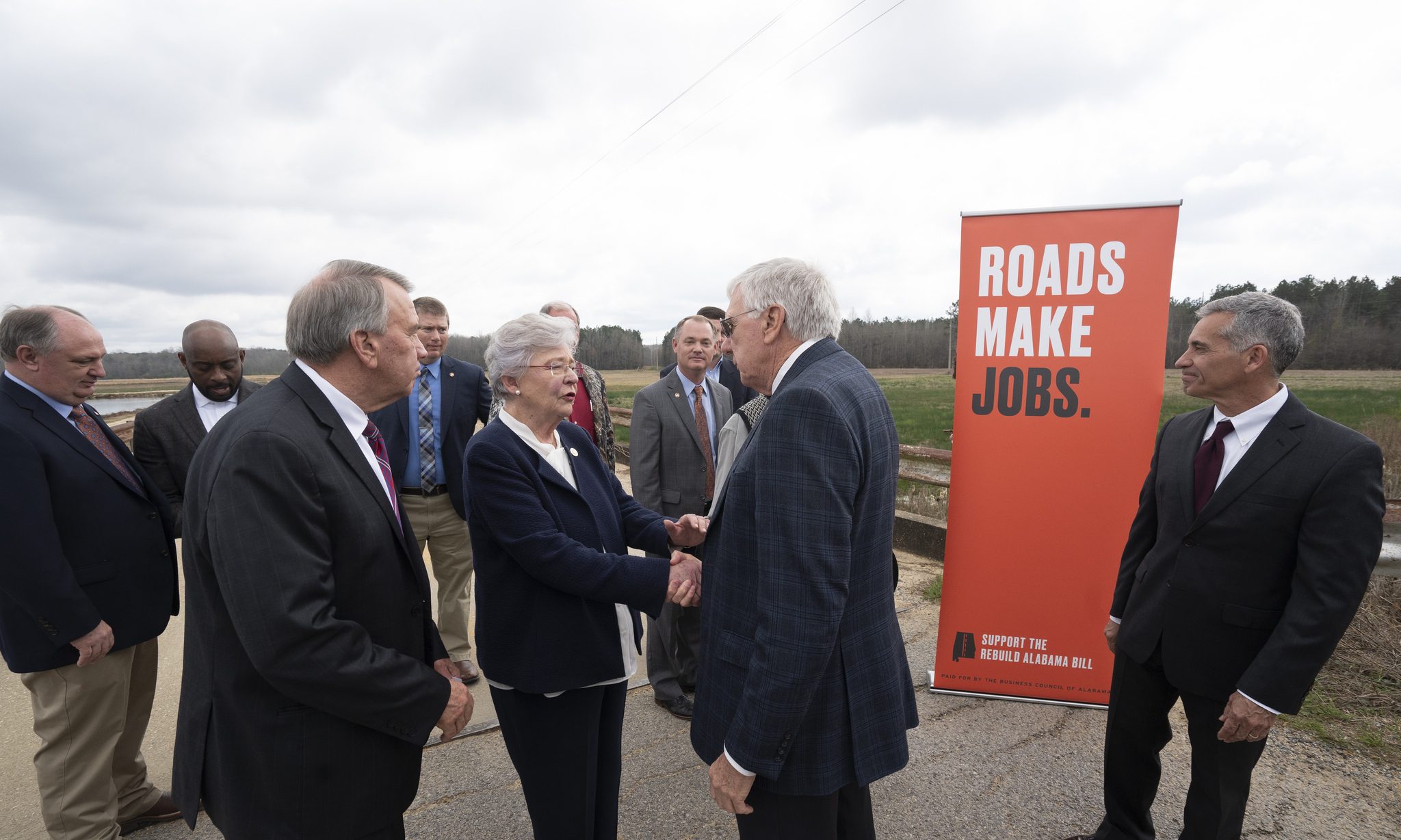 Gov. Kay Ivey’s infrastructure plan would increase the state motor fuels tax by 10 cents over the next three years and implement registration fees on electric and hybrid vehicles.

The plan to increase revenues in order to invest in infrastructure — dubbed the Rebuild Alabama Act — is being sponsored in the Alabama House of Representatives by Rep. Bill Poole, R-Tuscaloosa.

Alabama House Speaker Mac McCutcheon, R-Monrovia, and Senate President Pro Tem Del Marsh, R-Anniston, are strongly supportive of the measure. Given the unified stance of the GOP leadership, it’s likely the bill will move swiftly through the legislative process.

It is expected to be at the top of the agenda when the House and Senate convene the 2019 session on Tuesday. Leadership hopes to move the bill within the first few weeks of the session. They want this top priority out of the way by April.

“I look forward to working with members of the Alabama Legislature to address our critical infrastructure needs across Alabama,” Ivey said. “We have waited far too long to tackle this issue and Alabama lags far behind our neighboring states. This is a hard issue, and we certainly have a lot of hard work ahead of us, but now is the time to Rebuild Alabama.”

A report from the Alabama Transportation Institute found that the gas tax would cost the average driver about $55 a year or $4.58 a month, based on an average of 12,000 annual miles driven and a fuel efficiency of 22 miles per gallon.

The bill would raise the motor fuels tax by 6 cents on Oct. 1, 2019. It would increase by two cents per year in 2020 and 2021. And beginning in 2023, the tax would be indexed to the National Highway Construction Cost Index.

Indexing the tax to inflation isn’t uncommon. Other states do it, and that means lawmakers could potentially wipe the issue off their list of concerns for decades to come.

Proponents say the tax increase would generate more than $300 million for road and bridge construction and maintenance, a need Republican leadership and leaders in the business community say is paramount.

Alabama’s motor fuels tax hasn’t been adjusted since 1992, when lawmakers added a nickel to the levy.

A report from the University of Alabama found that any revenue increases from that tax increase in 1992 have been negated by inflation. The state’s purchasing power from gas tax revenue has actually dropped since 1992.

But the gas tax may have a bumpy road through the Legislature despite unified support among the GOP leadership. Some conservative Republicans and some Democrats oppose the measure, which they say is a tax on working families.

The ALGOP Steering Committee — the state party’s leadership — late last month approved a resolution opposing the gas tax increase after infighting among members on the committee.

There appears to be even less consensus among Democrats about whether to support the measure. Some other Democrats — including Senate Minority Leader Bobby Singleton — are supporting it, while others have criticized it.

Some of the state’s most powerful business and government lobbies, including the Business Council of Alabama, the Alabama Leauge of Municipalities and the Association of County Commissions of Alabama, are supporting the measure.

In addition to raising the motor fuels tax by 10 cents and indexing it to construction costs, Ivey and Poole’s bill would levy a $250 license and registration fee on electric vehicles and a $125 fee on hybrid-electric vehicles. Beginning in 2023, those fees would increase by five dollars every fourth year.

Once the tax is fully implemented, it’s expected to raise more than $320 million in revenue annually. More than $200 would go to ALDOT, $78 million to counties and about $26 million to municipalities. Another $10 million would go to funding improvements to state ports, including the Port of Mobile.

A report from the Association of County Commissions found that more than 45 percent of Alabama county bridges are more than 50 years old and in a “deficient” state in need of replacement.

The association’s report found that county governments need about $490 million annually to resurface roads every 15 years, the recommended timeframe.

Alabama county roads are currently on a 114-year resurfacing cycle, the association said.

And they need more than $2.3 billion to replace the 45 percent of bridges that are structurally deficient.

“The numbers in the report paint a painfully clear picture of what happens when a state favors excuses and delays over investing in its future,” said Sonny Brasfield, ACCA Executive Director. “The facts are indisputable. Alabama’s county roads and bridges are in crisis, and it is time to stop doing nothing.”

Ivey is expected to spend a large portion of her state of the state address Tuesday addressing the gas tax increase and her plans to replace Alabama’s aging prisons, the other agenda item slated to be a priority during the legislative session.

Lawmakers will convene Tuesday to begin the session. McCutcheon told The Montgomery Advertiser that he’d like to have a vote on the gas tax increase by Thursday, the first day any bill could be voted on.