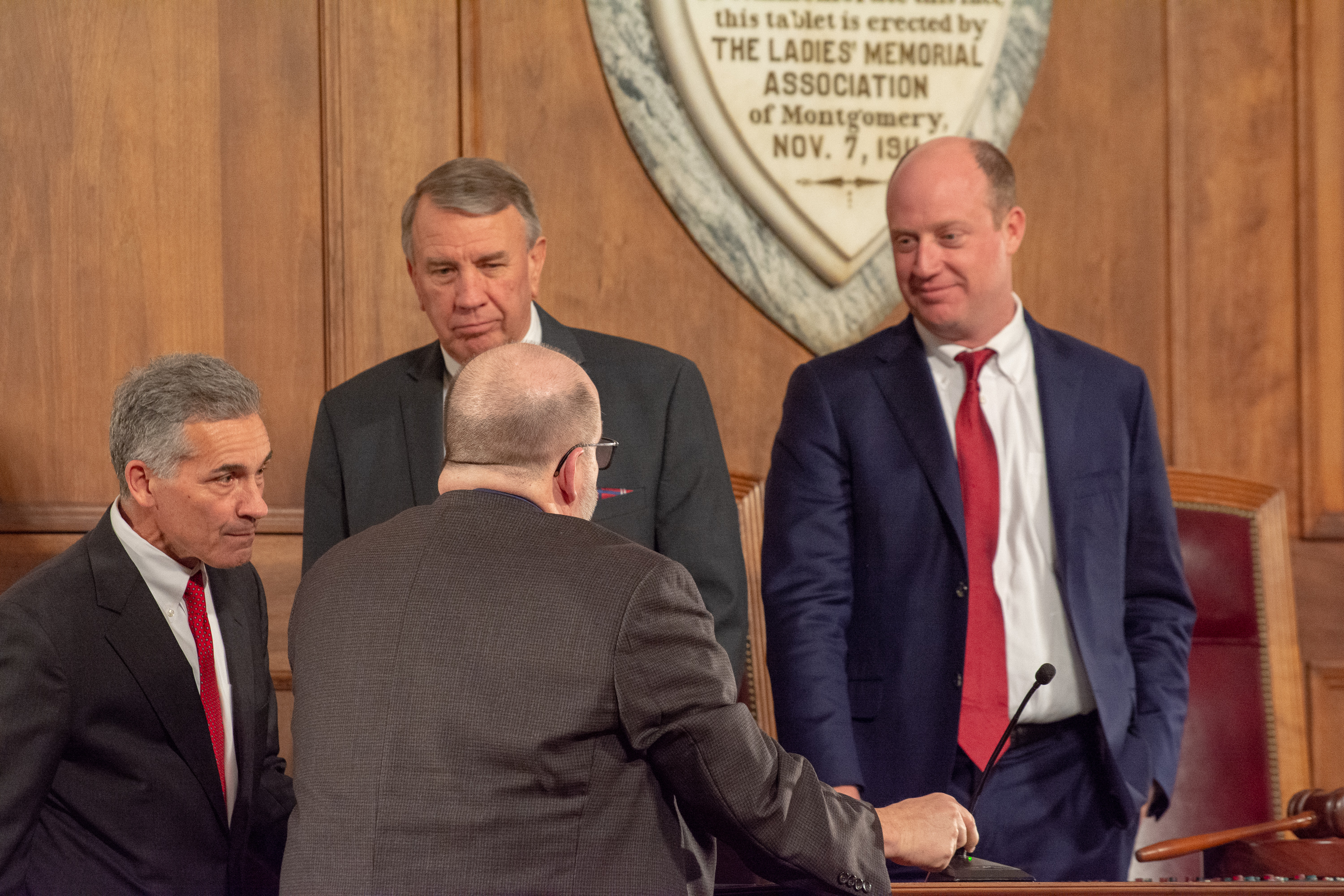 Senate Pro Tem Del Marsh, Speaker Mac McCutcheon and Lt. Gov Will Ainsworth talk together before Gov. Kay Ivey delivers the 2019 state of the state address before a joint session of the Alabama Legislature in the Old House Chambers of the Alabama State Capitol on March 5, 2019. (Chip Brownlee/APR)

Alabama took a strong step toward independence in its public schools this week when the State Senate approved legislation to repeal the Obama-era curriculum mandates known by most as Common Core.

Where we differ in the Common Core debate is who should set those standards.

I believe Alabamians should determine the curriculum and standards for our state’s schoolchildren based upon our available resources, our needs and our first-hand knowledge of what makes Alabama great.

We should not rely upon some out-of-state entity or liberal, Washington, D.C. bureaucrats to determine our standards, and we certainly should not continue embracing this most damaging legacy of the disastrous Obama administration.

When Thomas Jefferson said, “The government closest to the people serves the people best,” he understood that a top-down approach and governing from afar denies the important knowledge and details that those on the local level possess.

Perhaps the most asinine theory behind Common Core mandates is the cookie-cutter approach it takes to schools across our nation.

Rather than recognizing and accounting for the differences among the states, their workforce needs and the public educations they should offer, Common Core demands an across-the-board, one-size-fits-all mandate that is typical of liberal policy pronouncements.

Moreover, the public schools in a politically conservative state like Alabama, where character education and allowing students to acknowledge God are important, are vastly different from the schools in ultra-liberal cities like San Francisco and New York City, where educators consider themselves enlightened and the groupthink doctrine of political correctness dominates.

But, in the end, the most effective argument for repealing Common Core is the fact that it has proven to be an unmitigated failure.

When Alabama first adopted Common Core roughly a decade ago, advocates labeled it as the cure-all for our public education system, but the magic elixir they promised has proven to be just a worthless bottle of snake oil.

Prior to the adoption of Common Core, Alabama’s students ranked at or near the bottom in almost every education metric that was tested, and, a decade later today, our state still ranks 49th in math and 46th in reading.

For these stated reasons and too many others to detail, it is time for Alabama to abandon this liberal social experiment and chart its own, independent path toward success in education — one that is rooted in conservative principles and one that embraces long-proven, fundamental teaching concepts.

Sen. Del Marsh, R-Anniston, who filed the legislation, and the co-sponsors of his bill should be commended for working to end this unnecessary Obama-era relic.  Dropping the gavel when the repeal of Common Core passed the State Senate was one of the happiest and most satisfying moments of my time in public service.