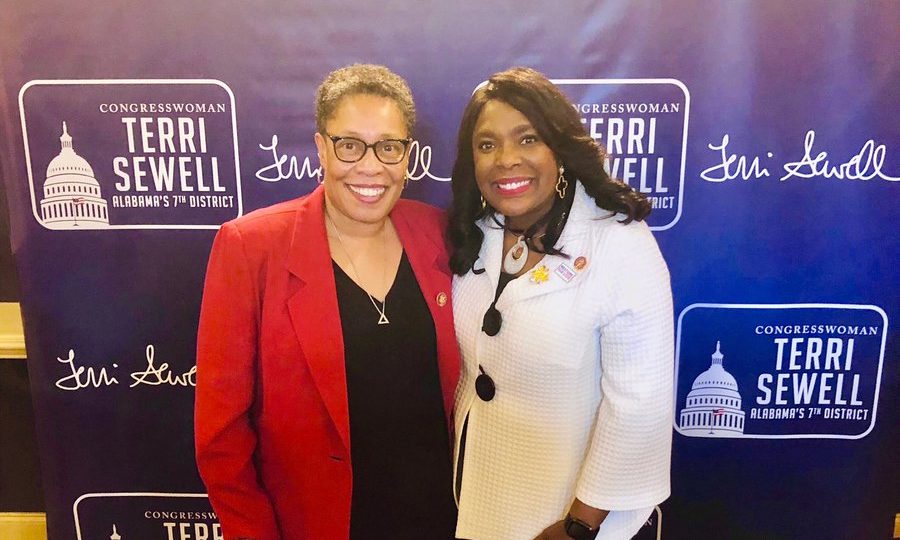 A congressional hearing was held in Birmingham Monday investigating reports of voter suppression. Congresswoman Terri Sewell, D-Selma, joined members of the House Administrative Subcommittee on Elections at an official meeting in Birmingham’s City Council Chambers as they heard from voting rights activists.

Two members of the House of Representatives joined Sewell for a field hearing in Birmingham after a series of stops in North Dakota, Brownsville, Texas and other places.

“This is a very important issue,” said Birmingham Mayor Randall Woodfin to the committee. “I thank you for taking on this issue.”

The hearing was chaired by Congresswoman Marcia Fudge, D-Ohio, the chair of the House Elections Committee. Fudge said that six years after the landmark U.S. Supreme Court decision Shelby v. Holder, several states, including Alabama, have made it harder to vote.

“Alabama has been slow to restore the voting rights of felons,” Fudge said.

She was also critical of Alabama’s photo ID law.

“This is not a political rally,” said Congressman George Kenneth “G.K” Butterfield, D-North Carolina. “This is an official congressional hearing of the U.S. House of Representatives.”

“The 1965 Voting Rights Act — it was a very powerful piece of legislation,” Butterfield said. “It eliminated the literacy test and gave minority groups a right to bring suit. Section five, the preclearance section was limited to several Southern states. Alabama was one of those.”

“Southern elected officials have resisted Section 5 for generations, but we always prevailed until Shelby versus Holder,” Butterfield said. “That is why we are here today, to gather evidence.”

Justice Roberts ruled that the formula for Section 5 was outdated. We are going to decide how to build Section 5. He said this is not just a feel good exercise; they are building evidence.

“We are under siege in this country,” Fudge said.

“We need federal oversight in the state of Alabama,” Sewell said in her closing statement. “You learned today that Alabama has a more restrictive voter ID law now than it did before the Shelby v. Holder case. You learned today that the problem disproportionately affects minorities, rural communities, the elderly and the disabled. … The cost of freedom, we know, is never free. It is paid by those who have fought for this right that we have and for us to sit where we sit in Congress to do the right thing.”

Former Congressman Earl Hilliard Sr., D-Birmingham, was there. He was the first African-American to serve in Congress from Alabama since the Reconstruction era. Federal Judge Hugh Clemons also attended the event.

“What we have seen with the Shelby decision is a rolling back of voting rights,” Fudge said. “People have a right to know what happened across this country due to Shelby v. Holder.”

“It seem innocuous that you have to show a photo ID to vote, but the disabled used to be able to show a social security card.” Fudge said. “It is unfortunate that we are making it harder to vote in Alabama.”

Montgomery was at the center of a battle between Calera and later Shelby County with former President Barack Obama administration’s Justice Department Civil Rights Division. Calera said they could not draw a majority-minority council district.  The DOJ disputed that and cited the city for annexations of majority white, new subdivisions. The challenge of the preclearance section went all the way to the U.S. Supreme Court leading to a Shelby County win in the landmark Shelby County v. Eric Holder ruling.

“Our government must commit to assuring that every citizen be included, every barrier destroyed, every election, from our local schools all the way to our federal elections, be fair,” Montgomery said. “I hope our elected leaders in Washington, D.C. can come up with some solution to protect every person’s right to vote by some formula or preclearance. For we all know, it has been said that one ounce of prevention is more valuable than a pound of cure.”

“I was elected in 2010,” Montgomery said. “Like many of my friends and associates, I knew very little about the Voting Rights Act of 1965. I learned about the states and jurisdictions that were covered and why. I could clearly understand how after Reconstruction had ended and how it disenfranchised African-Americans.”

Montgomery said he has had not problems in Shelby County since Shelby v. Holder, but it has been a little more challenging in other places. He said the light has shined on Shelby County and the city of Calera.

“Immediately after Shelby County v. Holder was handed down, Alabama proceeded to implement and enact new racially discriminatory restrictions on the ability of its citizens to register and vote, including a photo ID law, closure of driver license offices in the Black Belt and a request for authorization to require proof of citizenship in the federal voter registration form,” Blackshear said. “At least 66 polling places have been closed, and the city of Evergreen in Conecuh County has been bailed in under Section 3c of the VRA following litigation challenging a number of discriminatory voting practices.”

“What still remains is what I call the architecture of white supremacism,” Blackshear said. “That is embedded in the 1901 Constitution.”

“The purpose of the convention was to establish white supremacy in the state,” Blackshear testified. “The state of Alabama has taken as much advantage of Shelby County v. Holder to reclaim as much of that architecture as possible.”

Jenny Carroll is the chair of the Alabama State Advisory Committee to the U.S. Commission on Civil Rights.

“The days of a sheriff standing in the doorway of the polling place may be a thing of the past, but current voting regulations may produce the same effect on minority and poor populations in our state,” Carroll said. “The method may be softer, more subtle, but the results are exactly the same.”

“From voter identification laws to curtailed polling places to limited polling hours to lack of early voting to no-excuse absentee balloting, Alabama election laws disproportionately affect the voters in our state even as they claim to improve election integrity,” Carroll continued. “Such laws create barriers to voting in their reliance on either a one-size-fits-all notion of Alabama voters in which every citizen interested in casting a ballot has access to the required identification and documentation, transportation and the resources necessary to realize the right to vote, or they rely on the noting that small impediments to voting are tolerable.”

“How much would it cost to sue if your voting place was moved?” Butterfield asked.

“I have got four cases going on right now,” Blackshear said. “Those cases are brought with the aid of the ACLU and the SEIU. Those organizations are needed to bring the resources forward just to get a case started.”

“The greatest democracy in the world must not regress,” Fudge said. “We must recognize our faults and continue to move forward; we must progress.”

“When the SCOTUS handed down its decision in 2013 in the Shelby v. Holder case, Alabama legislators worked extremely hard to ensure that it is more difficult to vote and register to vote,” said Alabama NAACP President Benard Simelton. “First and foremost, Alabama implemented the photo ID law. That ID law prohibited lots of individuals from being able to vote. It is estimated that at that particular time, there were approximately 118,000 people who were immediately disenfranchised because they didn’t have the photo ID required.”

Nancy Abudu is the deputy legal director for voting rights at the Southern Poverty Law Center.

“We see that as a result of this voter ID law, people continue to be disparately impacted, and those individuals, by coincidence, happen to be voters of color and low-income individuals, which results in depressing voter participation in the state,” Abudu told the committee.

Scott Douglas is the executive director of Greater Birmingham Ministries.

“Money is obviously a burden, by definition, for low-income people,” Douglas said. “Even obtaining the ‘free’ state-issued photo ID requires people to draw on scarce funds to compile the underlying documents. The list of accepted documents required to obtain a voter ID card is limited and includes, for example, a birth certificate, hospital record, census record, military record, Medicare or Medicaid document, social security document, certificate of citizenship or official school record or transcript. Many of these must be requested from a government agency and may include a fee. … Alabama’s photo ID law is the new poll tax, but the reason for its existence is the same as the old one.”

Isabel Rubio is the executive director of the Hispanic Interest Coalition of Alabama.

“The legislation that we have seen, the attitudes and the environment here is explicitly geared at continuing to oppress, marginalize and further alienate people who want to be included in our community and who make really important contributions every day,” Rubio said.

Sewell has introduced legislation earlier this year to restore the Voting Rights Act of 1965 by developing a modern-day formula to determine which states must preclear election changes with the Department of Justice.

To see a video of Sewell speaking to the subcommittee: