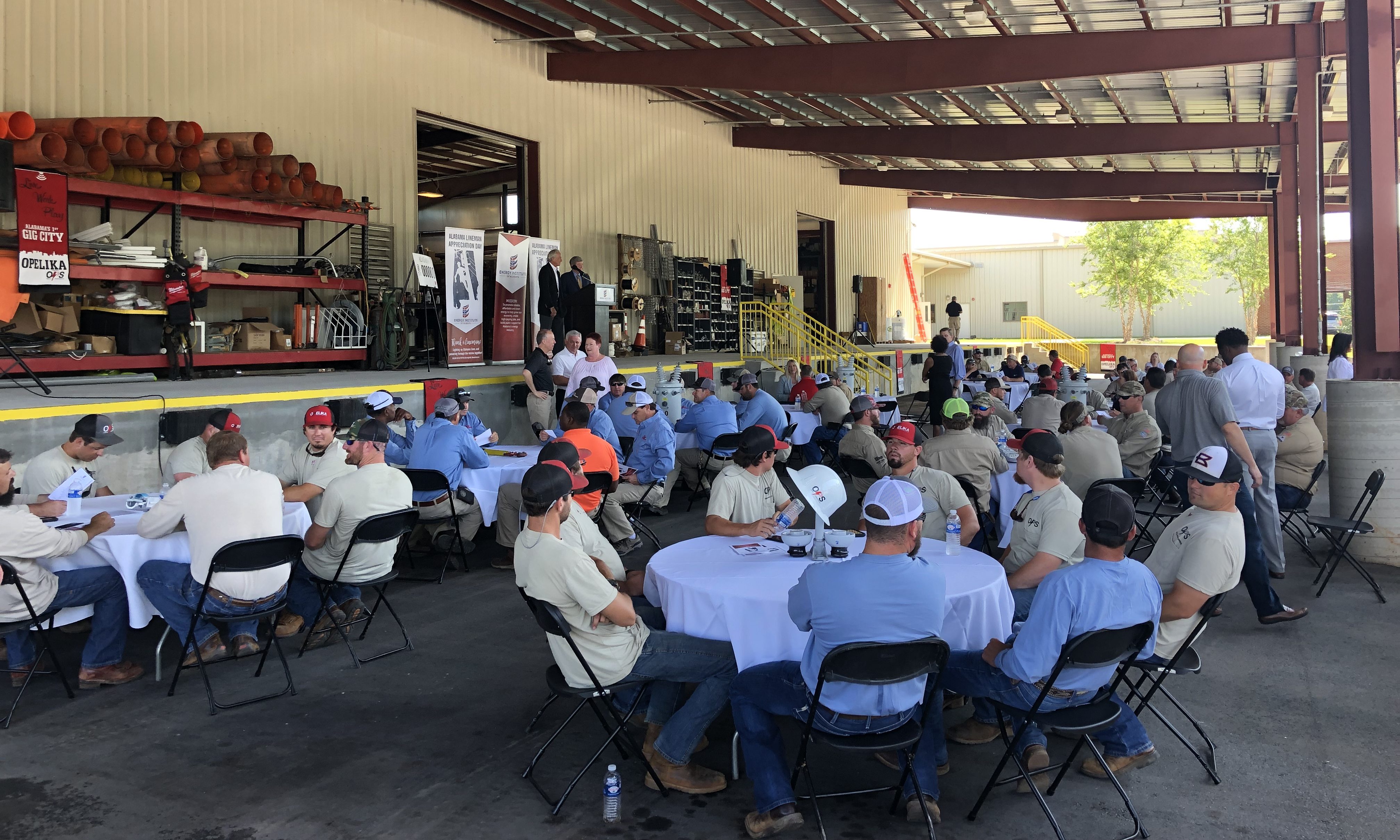 Group of linemen and others gathered at Opelika Power Services for AL Lineman Appreciation Day.
ShareTweetSubscribe

Opelika Power Services hosted the fifth annual Lineman Appreciation Day, sponsored by the Energy Institute of Alabama (EIA). The event recognized the men and women tasked with providing electricity to Alabama residents every day, even in dangerous conditions and after severe weather strikes.

“In good weather we love them, but in bad weather, we sure do appreciate them,” Opelika Mayor Gary Fuller said as he welcomed attendees. More than 80 linemen and guests were in attendance for today’s event.

Cullman Electrical Cooperative’s Jeff Osborn received the Energy Institute’s Outstanding Service Award for his twelve years of service as a lineman, as well as his commitment to go above and beyond his daily work duties for the cooperative. Chairman of the Energy Institute of Alabama, Seth Hammett, shared a story about Osborn organizing work days in the community to help citizens with much-needed yard work and home repair projects on his own time.

“What sets Jeff apart is his attention to detail and compassion for people he encounters each day,” said Hammett as he read Osborn’s nomination for the award.

Other active linemen attended the event with two sharing their own perspectives of what it means to be a lineman. All were gifted backpacks for use in the field. Hammett said that the special recognition for linemen is important due to their unwavering commitment to serve the people of our state every day and in the worst of conditions.

“Our linemen are the face of our industry,” Hammett said. “When people think about electric utilities, they think about linemen.”

Information about the newly created “Thank A Lineman” car tag was shared, including that the proceeds from the tag will benefit charities that support linemen and their families.

Lineman Appreciation Day began as a statewide celebration following a resolution sponsored by Representative April Weaver, R- Alabaster, which established the first Monday of June by the state legislature as a day to recognize these important individuals. Rep. Weaver spoke today about her own grandfather serving as a lineman and the personal sacrifices she has witnessed first-hand that linemen make every day to serve the citizens of the state. Linemen are celebrated nationwide on April 18, following a 2013 resolution passed by Congress.