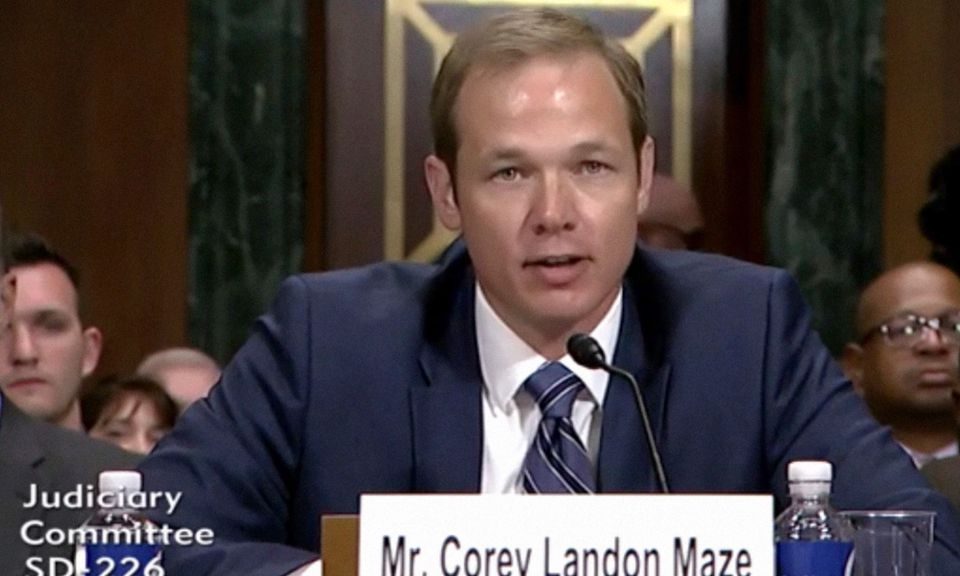 U.S. Sen. Richard Shelby, R-Alabama, announced Wednesday that Montgomery’s Corey Maze has been confirmed by the full Senate to be a U.S. District Judge for the Northern District of Alabama.

“Corey Maze’s confirmation to be a district judge for the Northern District of Alabama is another important step in the shaping of our courts,” said Senator Shelby. “His strong commitment to the rule of law and ability to adhere to the highest standards of judicial efficacy will allow him to excel in this esteemed role. Corey Maze exemplifies all of the characteristics of a model judge, and I am honored to have played a part in his confirmation today.”

Maze was nominated for the federal judgeship by President Donald J. Trump (R) in May 2018. Last October, he appeared before the Senate Judiciary Committee for consideration of his nomination and was favorably reported out of the committee. Senator Shelby commended Maze’s confirmation.

“Through its confirmation vote today, the U.S. Senate acknowledged what those of us in the Alabama Attorney General’s Office already know,” said Marshall. “Corey Maze is abundantly qualified to serve on the federal bench. His record as Solicitor General of the State of Alabama and Special Deputy Attorney General is deep and exemplary. He shepherded the State’s Special Litigation Unit acting as primary counsel in many complex cases ranging from the landmark 2010 BP oil spill case to the state’s opioid litigation.

“During his tenure in the Attorney General’s Office, Corey Maze argued cases as Alabama’s Solicitor General before the U.S. Supreme Court and has been recognized with three “Best Brief” awards from the National Association of Attorneys General,” Marshall added. “He also brings experience as a successful criminal trials and appeals prosecutor in the Attorney General’s Office.”

Maze was the Solicitor General of Alabama from 2008 to 2011. Maze began his career as an Assistant Attorney General in 2003.

Maze has served as lead counsel at all three levels of state and federal courts, including three cases in which he argued before the U.S. Supreme Court. He also authored three Supreme Court amicus briefs and won a National Association of Attorney’s General “Best Brief” to the Supreme Court Award in 2008, 2009, and 2010.

In addition to Maze’s confirmation, eight of Alabama’s federal judicial nominees have been confirmed in the Senate, each having been nominated by President Trump in 2017.

Shelby said that historic obstruction by Democrats has occurred, slowing the Trump Administration’s attempt to confirm judges. The previous six presidents combined faced a total of just 24 procedural votes on judicial nominees while President Trump faced more than 100 during his first two years in office.

To address this crisis, in April 2019, the Senate voted to reduce post-cloture debate time from 30 hours to two hours for certain executive and federal judicial nominations, including district court appointments, preventing further delay on confirming hundreds of qualified nominees. Since this change, the Senate has confirmed nearly twice as many nominees in half the time.

Maze is 41. Since this is a lifetime appointment, he could potentially still be serving on the federal bench in Birmingham into the 2050s.