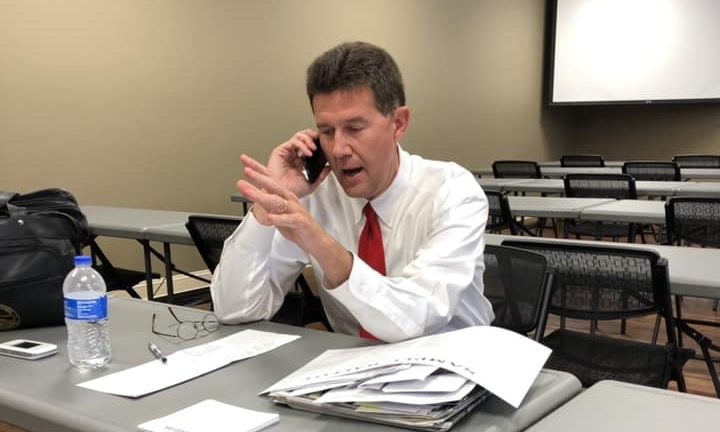 This morning, Alabama Republican Secretary of State John Merrill is expected to announce in Montgomery whether or not he will run for the United States Senate seat currently held by Sen. Doug Jones.

Merrill was re-elected last year to a second term as Alabama Secretary of State. He is term-limited from running again.

John Harold Merrill is the son of former Cleburne County Probate Judge Horace S. Merrill and retired teacher Mary T. Merrill. Merrill grew up in Heflin in Cleburne County. Merrill is a graduate of Cleburne County High School. John graduated from the University of Alabama where he was President of the Student Government Association (SGA) in 1986-87. While at University, Merrill served two Congressional Internships in Washington, D.C. for Congressman Bill Nichols (D) and U. S. Senator Howell Heflin (D).

Merrill has worked as a bank manager, a National Account Executive and Manager at Randall Publishing Company, the Director of Business Development for the Chamber of Commerce of West Alabama (1993-94), and the Director of Community Relations and Community Education for the Tuscaloosa County Board of Education. His wife Cindy was the principal at Westwood Elementary in Tuscaloosa County. They have two children.

He previously served one term in the Alabama House of Representative representing Tuscaloosa from 2010 to 2014. He was part of the 2010 class of Representatives where Republicans took control of the legislature for the first time in 135 years. Merrill seat was vacated by Robert Bentley (R) when he ran for Governor that year.

Jones narrowly defeated former Chief Justice Roy Moore (R) in a 2017 special election. Jones is widely viewed as the most vulnerable incumbent up for re-election in the United States Senate. Moore came within about 21,925 votes of defeating Jones last time. Then Moore was under a cloud of suspicion based on accusations that he had acted inappropriately with young women in the 1970s. Democrats poured in $millions from out of state for Jones, while national Republican groups refused to donate to Moore, citing the sexual abuse accusations. Senator Richard Shelby (R-Alabama) urged Alabama Republicans to write-in anyone but Moore. 22,852 voters did that.

Merrill told Alabama Public Television’s “Capitol Journal” that it would be “extraordinarily difficult” for Moore to win in a 2020 Senate campaign.

Moore says that the 2017 special election was fraudulent and cited a sophisticated Russian style operation by a team of Democratic operatives called Operation Birmingham. Operation Birmingham was exposed by the Washington Post and New York Times. It worked to discredit Moore and targeted Republicans to decrease GOP turnout and encourage GOP voters to waste their votes on a write-in effort. Thousands of fake social media identities, Russian-bots, were created pretending to be Alabama Republicans who were disgusted by Moore and would not support him. The bots, who were being controlled by their masters in D.C., spent all of their time on social media making accusations against Moore and encouraging other Republicans not to vote for Moore.

In 2018 no statewide candidate running as a Democrat came within ten points of their Republican counterpart. Doug Jones is the only Democrat to win any statewide contest in the state of Alabama since 2008, when the late Lucy Baxley beat Twinkle Andress Cavanaugh to be PSC President. Cavanaugh unseated Baxley four years later.

The primary will be March 3.