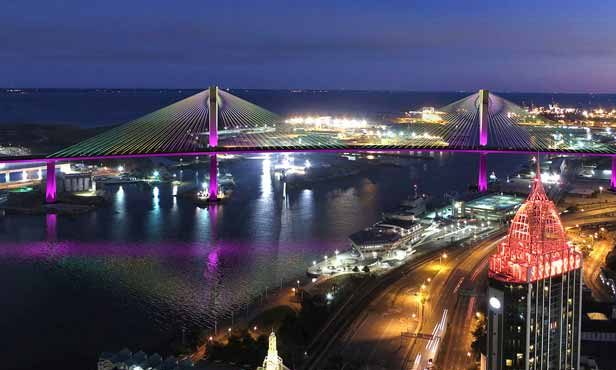 State Auditor Jim Zeigler charged that a company on the short-list for building the Mobile Bayway toll bridge walked off four projects in Florida, and its parent company filed bankruptcy.

According to Zeigler, Astaldi Construction Corp. abandoned four large road and bridge construction jobs in Florida. Astaldi’s surety bondholders were required to find and pay new contractors to perform the abandoned work, which has still not been completed.

Astaldi is now a part of Mobile River Bridge Group and is handling lead operations and maintenance for them. They are one of three companies allowed to compete for the $2.1 billion contract for a toll bridge and road on I-10 over Mobile Bay.

“The Alabama Department of Transportation is getting us into something that we cannot get out of,” Zeigler said. “ALDOT blew a $250 million federal grant application to pay toward the bridge. They are dead-set on charging tolls to cross Mobile Bay. Now, I find out that one of their short-list companies walked off four projects in Florida.”

ALDOT has proposed a toll charge of up to $12 for a round trip over Mobile Bay between Baldwin and Mobile counties on I-10. They would charge the toll both on the new bridge and on the existing Wallace I-10 tunnels. The selected company, a private partner called “P3” would operate the bridge and collect tolls for the next 55 years. Persons who went under the electronic toll counters that did not pay the bill would potentially have their registration suspended.

Zeigler has started a Facebook group three weeks ago to oppose the I-10 toll bridge. The group now has 6,500 members.

Last year, ALDOT applied for a federal grant to help pay for the bridge project. That grant request was denied by the U.S. Department of Transportation.

Since there is not federal money for the project, ALDOT proceeded with “plan B,” which is contracting with a private company to build the bridge and allow them to collect tolls on the project for over half a century.

Zeigler says that ALDOT should put this project on hold and go back to the drawing boards on a new plan and suggested that a congestion plan would help alleviate the issues.

“Going across smooth as silk,” Zeigler said. “Nothing wrong with this bridge. Congestion management can fix it. Working on a congestion plan that is very affordable.”

Advocates for the working poor have suggested that the common people with lower incomes who go back and forth between Mobile and Baldwin Counties will be the most impacted by the toll system. Others have expressed concerns that residents of booming Baldwin County will just avoid Mobile all together and will instead do their big city needs in Pensacola, Florida instead.

“Either ALDOT was negligent in this grant application, or else they lost the grant on purpose to further their intention of a toll bridge operated by their partner,” Zeigler said. “A $12 round trip toll over the bay will damage Baldwin and Mobile counties worse than Katrina and the BP oil spill combined.”

Zeigler is term limited from seeking a second term as state auditor.

He has formed an exploratory committee to look at running for the U.S. Senate seat currently held by Sen. Doug Jones.