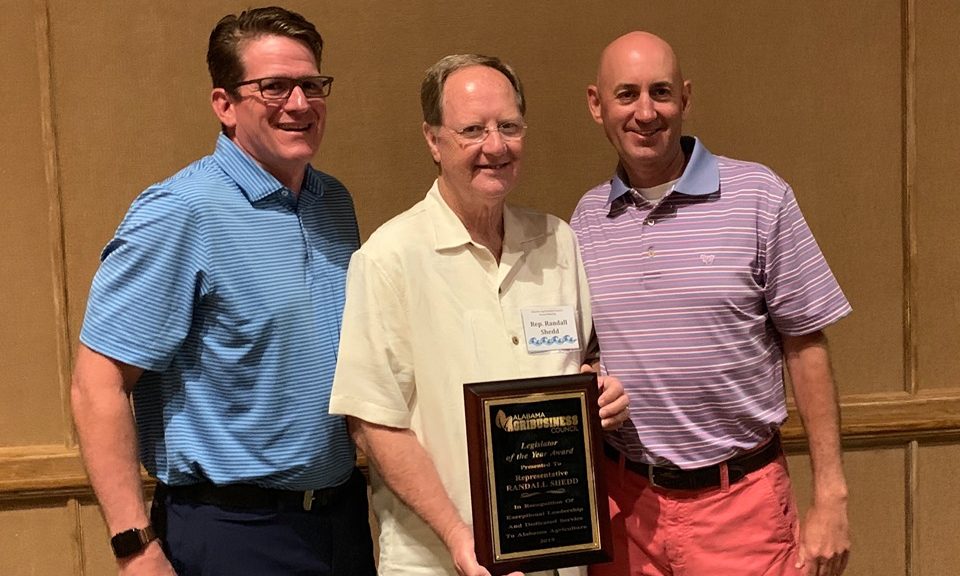 The Alabama Agribusiness Council awarded their legislator of the year award to State Rep. Randall Shedd, R-Cullman, at their annual conference on Monday.

“I appreciate the Alabama Agribusiness Council presenting me with their ‘Legislator of the Year’ award last night at their annual conference,” Shedd said on social media. “Agribusiness is Alabama and my district’s largest industry, and it has always been my goal that my voting record reflects the needs and interests of my district. Rural Alabama had a good year this legislative session.”

“Rep. Randall Shedd worked diligently with others to bring rural broadband to the state of Alabama,” Jones said. “His recognition is well-deserved.”

Shedd sponsored rural broadband legislation that passed the Legislature and was signed into law by Gov. Kay Ivey.

The Alabama Agribusiness Council was a prominent member of the Alabama Rural Broadband Coalition, which advocated for that legislation.

“We believe having a reliable internet connection is not only a basic personal necessity in today’s society, but high-speed broadband access in rural Alabama could bring an array of benefits related to education, telemedicine, economic development and agriculture,” the ARBC said in a statement.

Aderholt was first elected in 1996 and is serving in his 12th term representing Alabama’s Fourth Congressional District. Aderholt is a member of the powerful House Committee on Appropriations, which has jurisdiction over funding the operation of the federal government. He serves as ranking member of the Subcommittee on Commerce, Justice and Science and supports greater transparency, accountability and oversight to the appropriations process. Aderholt also serves as a member of the Agriculture and Rural Development Subcommittee and the Defense Subcommittee.

The Heritage Award went to Jack Odle. Odle grew up on a diversified farm in east-central Kansas. He received his B.S. in journalism with minors in animal science and agriculture economics from Kansas State University. In 1976, he joined Progressive Farmer and was named editor in 1985. Odle served on the Alabama Agribusiness Council Executive Committee and Board of Directors and was very involved in the formation and development of the Council. One of his many contributions to AAC was the publication of Agri-business Accents, a newsletter highlighting Alabama agriculture.

Leigha Cauthen is the executive director of the Alabama Agribusiness Council.

John Gilliland provided a glimpse into the latest news out of Washington, D.C. as it impacts agriculture. This presentation focused on foreign trade developments, legislation, 2020: Census, Redistricting and Elections including a behind the scene look into the political climate in D.C.

Cynthia Price, with USDA NASS, spoke on the results of the 2017 Census of Agriculture for Alabama and explained how to access the full report. New items released in this Census include information on military service, food marketing practices and on-farm decision making. The full Census report includes millions of data points, including number of farms, land in farms, total value of production, demographics and more at the national, state and county levels.

Ellen Zimmerman, with the American Seed Trade Association, spoke on gene editing and innovation. ASTA and the Biotechnology Innovation Organization have launched Innovature, a new platform to spark a thoughtful dialogue around innovation in food and agriculture, with an initial focus on gene editing. The objective is to grow awareness, acceptance and adoption of gene editing in food and agriculture and seed positive ground for future innovations to benefit our planet, our health and our food.

Tal Coley, with AmericanHort, spoke on various industry focus points in Washington, D.C. to include H-2 labor programs, trucking regulations, such as Hours of Service changes and the ELD Ag Exemption, as well as recent court cases and legislation on pesticides.

Taylor Pursell, with Pursell Agri-Tech, spoke on next generation crop nutrition for Alabama Agriculture. The Pursell family has been involved in the agricultural and specialty fertilizers business since 1904 and has long been a pioneering developer of premium controlled-release fertilizer technologies. Pursell Agri-Tech is based in Sylacauga and is committed to expanding on this legacy by developing and commercializing sustainable, next generation, controlled-release fertilizer and coating technologies that economically increase agricultural output and productivity while reducing the impact on the environment.

The 2019 Alabama Agribusiness Council annual meeting was June 23 through 25 at the Perdido Beach Resort in Orange Beach.

ADECA will deploy the funds in the coming months through grant programs to help expand access to high-speed internet service.

We have invested in a state-of-the-art mapping process that will be key to unlocking where we invest our money in the future.