Last legislative session, with good results and great PR rolling in for Alabama’s Pre-K program, the Department of Early Childhood Education received a record-breaking increase in funding, as Gov. Kay Ivey and lawmakers pledged to build on one of the few bright spots in Alabama’s public education programs.

The Education Trust Fund budget passed by the Legislature and signed by Ivey included $96 million for DECE, an increase of $18.5 million from the previous year. It was the largest increase in the program’s history and hailed as a triumph for education.

But this is Alabama. And where there’s money to spend, you’ll find the usual leeches lurking about, figuring out ways to divvy up a portion for themselves and their friends and family.

In late June, just a couple of weeks after Ivey gave final approval to the ETF budget, DECE secretary Jeana Ross awarded a marketing contract to a Birmingham firm.

But not just any contract.

And not just any firm.

That work would include, according to the contract that was submitted to the Legislative Contract Review Committee, “design a multimedia marketing strategy to provide parents the knowledge and understanding of excellence in education.”

I’m going to pause here and ask you to read all of that again.

Particularly the parts where we used $999,000 of education funds — while parents are lugging toilet paper and printer cartridges to their kids’ schools — to tell those parents about “excellence in education.”

I’m not sure it’s the parents who need the lesson.

If it sounds like nonsense, well, hold on. It gets worse.

The firm selected for this lucrative contract was Telegraph Creative, located in Birmingham.

If that name sort-of rings a bell for you, it’s because that was the landing spot for former Yellowhammer News founder and White House bellhop Cliff Sims — the guy about whom Trump famously said, “Who?”

Sims is now the president of Telegraph Creative, which has so far been paid more than $400,000 out of the education trust fund, but prior to joining that company and prior to his trip to D.C., Sims was in charge of Yellowhammer News.

Yellowhammer, we all now know — thanks to a fantastic story written by the Columbia Journalism Review earlier this year — was and is owned by (former) registered lobbyists, Tim Howe and John Ross.

So, Howe, Ross and Sims all operated Yellowhammer — an unabashed rightwing website dedicated to propping up Republican politicians and pushing their agendas. All for the right price, of course. That CJR story noted that Yellowhammer raked in more than $185,000 from politicians and political action committees in 2018.

And Howe and Ross, who have both served as directors of the Alabama Republican Party and whose lobbying firm had close ties to convicted felon Mike Hubbard, run in the usual ALGOP conservative circles.

Oh, and Ross’s mom just happens to be Jeana Ross, the secretary of the Department of Early Childhood Education and the person who awarded the contract to Telegraph Creative.

I’ve been all through Telegraph’s website and reviewed the company’s work (most of which is very good), but I don’t see any work for any public education entity or any entity even remotely in the education field.

But I’m guessing that didn’t matter.

Some important people are not very happy about the whole thing. I was sent a copy of the contract by a top ALGOP strategist, who was angry. And he wasn’t alone. Several elected officials who I spoke with over the past few days were also unhappy with the large pricetag and the questionable ties between Jeana Ross and Sims.

The governor’s office was apparently caught off guard by it as well, and the response provided by spokesperson Gina Maiola didn’t exactly provide a lot of cover.

“The Alabama Department of Early Childhood Education used the proper process to ultimately contract with Telegraph Creative. In a transparent method, it was procured through the public RFP database on STAARS and was approved in June by the legislative contract review oversight committee.”

Allow me to translate that: It might be shady, but at least it’s not illegal.

This is government at its worst. Which is the sort of government that Alabama is famous for.

And the worst part is we all know nothing will happen. The contract has been signed and a good chunk of the money spent. The players involved are the same players who are always involved. They’re not going anywhere. If anything, they’ll just learn to make their leeching less obvious next time.

The only possible punishment would come from voters, who might choose alternative candidates because these can’t be trusted with your tax dollars. But we all know that’s not happening, because these folks are wearing the same jerseys as the majority.

But at least now none of you can pretend that you don’t know you’re getting hosed. 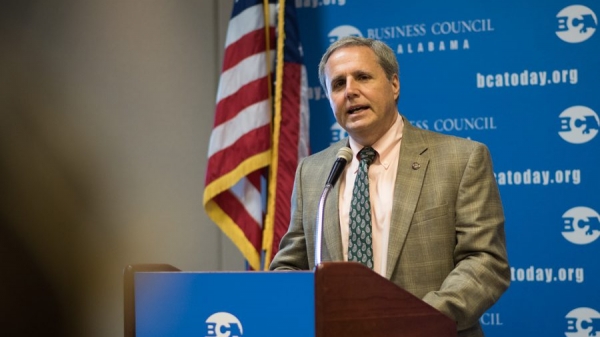 She recently completed 16 years on the Tuscaloosa City Council, having served the last 4 years as council president.

"The Senate was deliberate, effective and efficient as it took up a longer-than-usual list of issues."