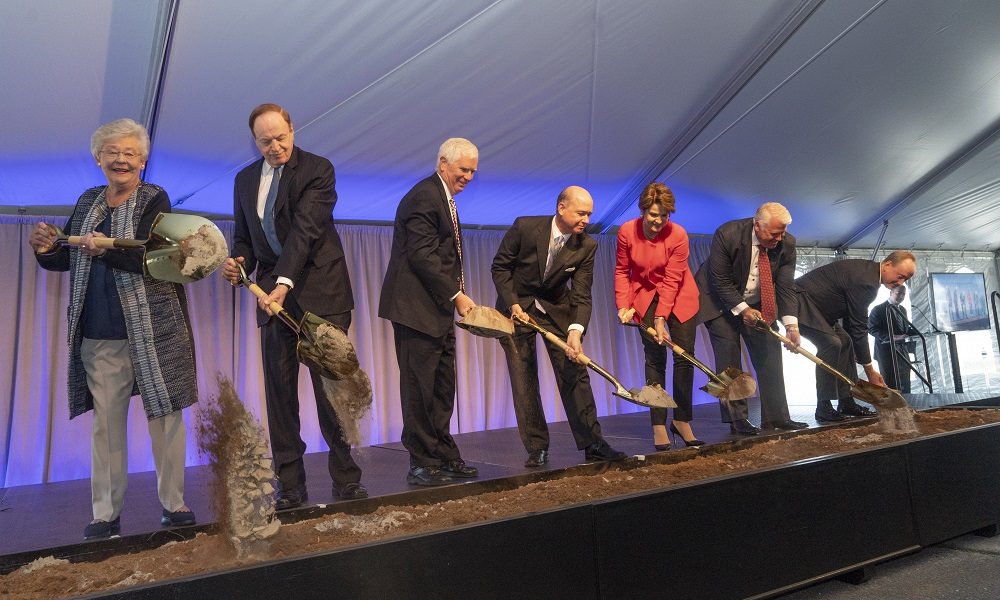 Governor Kay Ivey gave remarks at the Lockheed Martin “Hypersonic Production Facility” Groundbreaking Monday, September 16, 2019 in Courtland, Ala. Lockheed Martin will establish a new facility for the assembly, integration and testing of hypersonics programs and locate the management and engineering workforce for many of these programs in Huntsville. This is make Northern Alabama its central location for Hypersonic Strike Work. The Courtland expansion will bring two new buildings in support of Lockheed Martin’s portfolio of hypersonics programs. This decision brings 72 new jobs to Courtland and 200 new jobs to Huntsville over the next three years with additional job growth expected. (Governor's Office/Hal Yeager)

Lockheed Martin held a groundbreaking ceremony Monday at the site of their factory in Courtland. Lockheed Martin is building two new buildings at the Courtland facility for the assembly, integration and testing of hypersonic programs. The company will locate the management and engineering workforce for these programs in Huntsville.

The move will mean 72 new jobs in Courtland and 200 new jobs in Huntsville over the next three years with additional job growth expected.

“It was exciting today as Lockheed Martin broke ground on their new Advanced Hypersonic Manufacturing Building in Courtland,” Congressman Mo Brooks (R-Huntsville) said. “I enjoyed taking part in today’s ceremony alongside Governor Ivey, Senator Shelby, Congressman Aderholt, Army Chief of Staff General James McConville, and many others. At this facility, Lockheed will assemble, integrate, and test hypersonic weapons systems that are crucial to America’s security.”

U.S. Senator Richard Shelby (R-Alabama) said that he was, “Honored to be a part of today’s groundbreaking for the new @LockheedMartin facility in Courtland, Alabama. Hypersonic weapons are the future, and developing them is a critical priority as we continue to innovate and improve our nation’s defense. Excited this work will take place in Alabama. @ Courtland, Alabama.”

“Lockheed Martin has a longstanding relationship with the state of Alabama, and I am proud to see that strengthen even more as they make our state the flagship location for their hypersonic programs,” Alabama Governor Kay Ivey (R) said. “Both Courtland and Huntsville will gain new jobs, which is always welcome news. I am proud and confident that Alabamians will help advance Lockheed Martin’s goals as we begin working towards the advancements of the future.”

“The decision to bring hypersonic manufacturing to this region would not have been possible without the support of the State of Alabama, our local partners including Lawrence and Madison counties, the cities of Courtland and Huntsville and Tennessee Valley Authority as well as those elected representatives in Congress,” said Lockheed Vice President Scott Keller. “On behalf of Lockheed Martin, we are honored to expand our presence in Northern Alabama and watch as the next cohort of innovators take advanced defense technology to levels we once thought were impossible.”

Keller is the Vice President and general manager for Strategic and Missile Defense for Lockheed Martin.

“Aerospace and aviation are dominant industries in Alabama,” Huntsville economic developer Nicole Jones told the Alabama Political Reporter. “Our state supports the Department of Defense, both economically as well as in terms of genuine appreciation for men and women in uniform. The US Army’s selection of Lockheed Martin in Courtland (Lawrence County) reaffirms that Alabama has the quality and skilled workforce necessary to develop prototypes that are critical to missions involving national security. The 272 positions created over the next three years in Courtland and Huntsville as a result of Lockheed Martin’s newest announcement are quality jobs that will be a tremendous economic boost for the area.”

Lockheed Martin Chairman, President and CEO Martin Marillyn Hewson was also present at the event as well as Lockheed Executive Vice President for Space Rick Ambrose. Officials representing the Office of the Under Secretary of Defense, U.S. Air Force, U.S. Army and U.S. Navy were on hand for the groundbreaking event in Courtland to mark the occasion at the site of the next hypersonic production facility.

Ambrose hosted an event in Huntsville later that day to celebrate the increased workforce expansion as part of this effort.

Lockheed Martin has operated in Alabama for decades and has over 2,000 employees based here. Their efforts in Alabama includes research and development on rockets and space launch vehicles, tactical missiles, space exploration, and air and missile defense targets. Earlier this year, the company announced plans to expansion at its missile production facility in Pike County.

Lockheed Martin is an industry leader in the development, testing and fielding of hypersonic systems. Hypersonic weapons travel at over five times the speed of sound making it very difficult for existing defense systems to intercept and destroy a hypersonic weapon. Hypersonic strike capabilities have been identified by the U.S. government as a critical capability that must be addressed in support of the U.S. National Security Strategy.