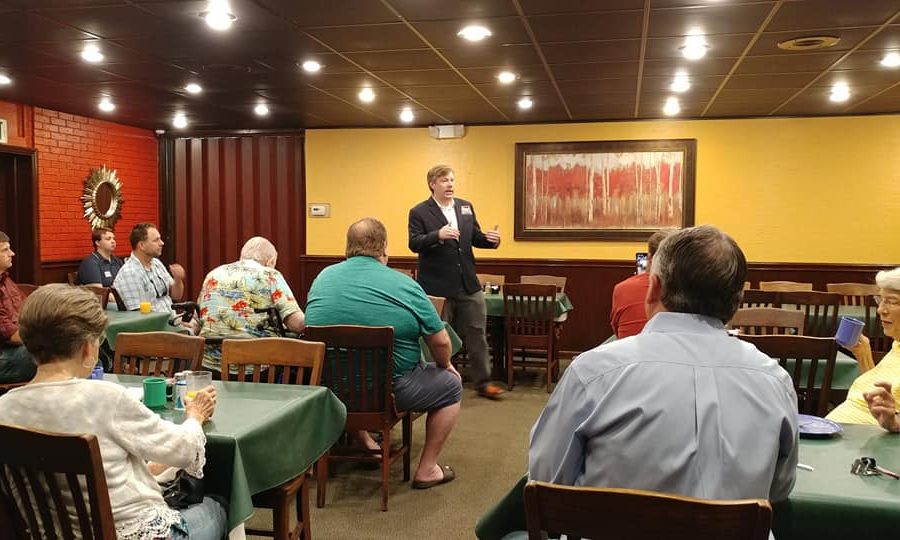 State Representative and candidate for the Alabama Court of Civil Appeals Matt Fridy spoke to attendees of the Etowah County Republican Breakfast about his effort to win election for an open seat on the state appellate court.

Fridy said that he began in politics early because his parents were very passionate about the Pro-Life movement.

“I was holding a sign picketing abortion clinics when I was ten,” Fridy said.

Fridy said that one of the proudest moments he experienced as a legislature was when the people of Alabama passed the state constitutional amendment in 2018 declaring that Alabama is a Pro-Life state.

Fridy said that Planned Parenthood brought in over a $million and tried to confuse the issue. The Pro-Life people did not have $8,000; but still prevailed.

Fridy said that he also worked on the impeachment of then Governor Robert Bentley (R).

“Ed Henry introduced the impeachment resolution,” Fridy said. The last time that the state impeached someone was 1915, a Secretary of State accused of campaign finance violation. The legislature considered impeachment but did not impeach then. We had no process to impeach.

Fridy said that he came to Speaker of the House Mike Hubbard and the leadership and said that there needed to be a process for impeachment to work. They turned around and told me to write it.

Fridy said that he modeled the process for impeachment after the rules in Illinois, where several governors have been impeached in recent years.

Former State Senator Phil Williams (R-Rainbow City) said that they had the same situation in the Senate so he authored the processes for how the Senate would address impeachment, if the House voted to impeach.

Williams is the Etowah Republican Party Chairman and works for the Alabama Policy Institute as the Director of Policy Strategy and General Counsel.

The House votes to impeach; but the Senate would decide whether the accused was guilty or not and if guilty whether or not to remove.

Bentley ultimately resigned on the first day that the House Judiciary Committee began hearings on impeachment.

Fridy said that too many speakers have been shouted down on college campuses. His bill makes all the common areas of a college campus a free speech zone. Also groups can not be charged more for security because they bring in a controversial speaker.

Williams said that it is the toughest campus free speech bill in the country and legislators in other states are modeling their legislation after the Alabama bill.

Fridy said that he has practiced law in private practice, has worked for the law firm of Wallace, Jordan, Ratliff & Brandt, taught at the University of Montevallo, and served for six years as a staff attorney for the court of Civil Appeals.

Currently Fridy is an appellate law attorney that writes appeals to the court.

Fridy is a father of five.

Fridy says that he is happy that his children are able to go to a private school where they are taught Latin in the third grade and stresses the classics and memorization like schools did in the nineteenth century. The school is based on a model set up by Hillsdale College.

Fridy has one son and four daughters and that he enjoys baking with his daughters on the weekends where his wife is working, as a pharmacist.

The Etowah County Republican Breakfast is held on the third Saturday of
each month at the Western Sizzlin in Rainbow City at 7:30 a.m.

Givan said Secretary of State John Merrill should resign and that he should be investigated over the allegations.