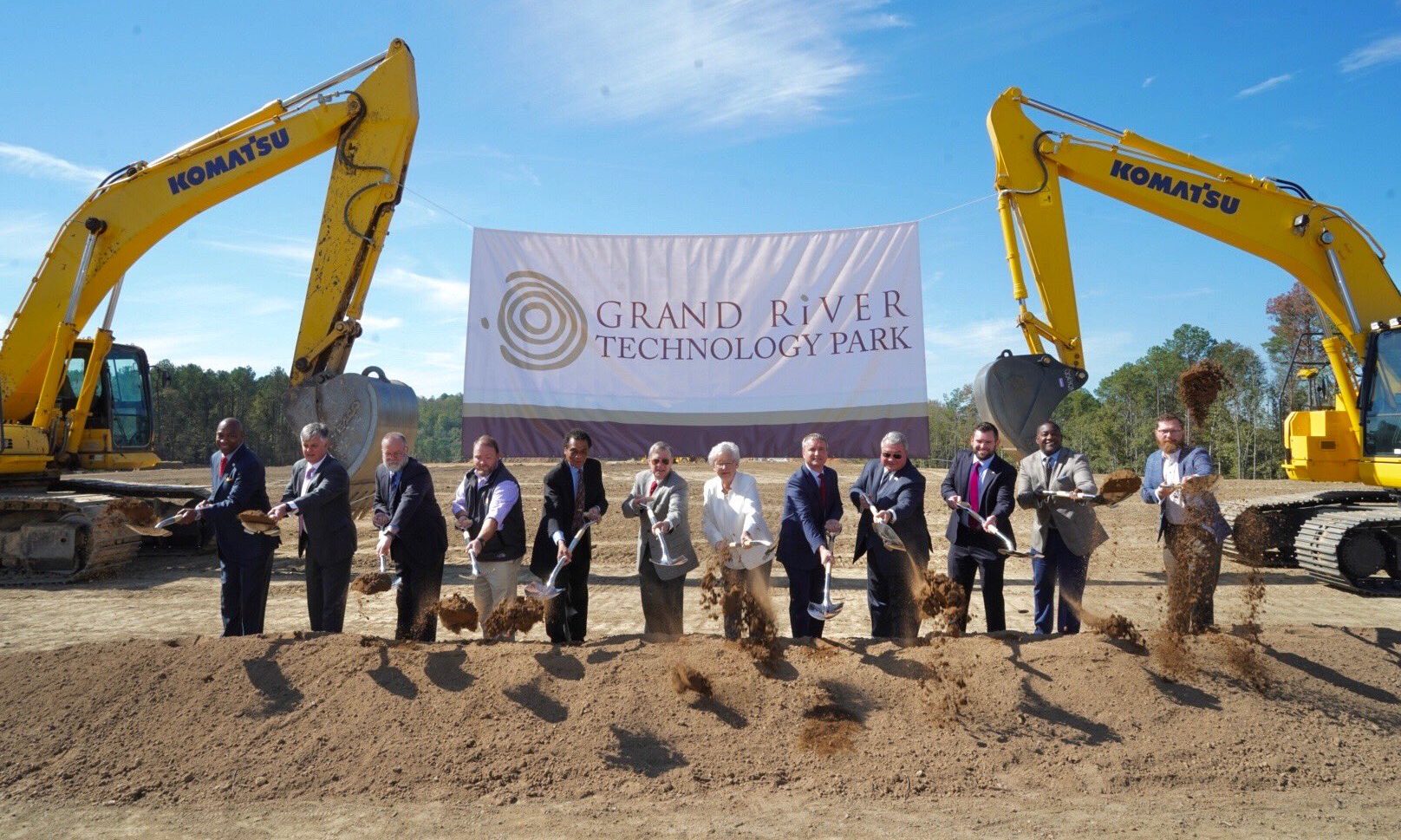 Thursday, Alabama Governor Kay Ivey (R) attended the groundbreaking of the Grand River Technology Park adjacent to the Barber Motorsports Park along the vital I-20 corridor connecting Birmingham with Atlanta.

“This is an exciting day and thank you all for coming here to celebrate the groundbreaking of Grand River Technology Park,” Gov. Ivey said. “Many of you know that building our workforce development is one of the top priorities of my administration so when I was made aware of the grant that U.S. Steel got from the Alabama Department of Labor of $6 million I was extremely excited.”

“This investment will not only develop this park; but will also relocate Southern Museum of Flight,” Gov. Ivey added. “This will be a huge addition to our state’s economy. This project is estimated to bring in 1,200 new opportunities for employment and generate some $85 million in economic impact to the Birmingham metropolitan area.”

“One of my administration’s proudest accomplishments is our low unemployment rate,” Ivey added. “We recently announced a new record low of three percent. While many initiatives went into making this possible; it never would have become a reality without community leaders working with companies like U.S. Steel to make projects like this possible. So thank you for hosting me here today and may God continue to bless the great state of Alabama.”

Alabama Commerce Secretary Greg Canfield and Alabama Labor Secretary Fitzgerald Washington were both on hand for the groundbreaking.

“It is great to collaborate with so many wonderful agencies and partners: U.S. Steel, the City of Birmingham, the Southern Museum of Flight, Jefferson County, the City of Leeds, the Office of Surface Mining, and the Governor’s office,” Sec. Washington said. “We know that this project has potential to really affect and change this area. The grant awarded by ADL AMF program will allow for hundreds of jobs in the Birmingham area. Conservative estimates allow for 1,200 jobs and an estimated $85 million investment.”

“The Technology Park will bring wonderful improvements,” Washington added. “There will be research and development, tourism and light manufacturing. Not only are we excited about the progress that is coming, but we are also happy about this project. A lot of dangerous abandoned mine land was removed. Our AML team does a great job with monitoring these dangerous areas and cleaning them up so that businesses and families that live there can be safe. So I would like to thank them for their hard work that helped make this groundbreaking ceremony possible. It is a great day for all of us here and I am proud to be part of it.”

The property, which is owned by U.S. Steel, was mined in the first half of the twentieth century so there were hazardous conditions that had to be cleaned up before the site could be developed. The Alabama Department of Labor awarded a grant of $6 million to U.S. Steel to clean up the site. Senator Richard Shelby (R-Alabama) was thanked by the company for providing assisted with getting federal funding for the grant program to make this possible.

“Today on this site; through this partnership with all levels of government: federal, state, county, and city; we are providing more than just trees over rough topography for a new company or an expanded company. We are providing these technology based companies a prepared site with roads and utilities,” U.S. Steel real estate Director Jammie Cowden said. “And Soon these prospect companies will work towards their own grand vision for an advanced manufacturing facility or research and development enterprise or drawing on the synergies of a world class motorsports park. This opportunity for growth in Birmingham unites both private companies and public entities.”

Economic developer Nicole Jones told the Alabama Political Reporter, “Grand River Technology Park is an excellent redevelopment opportunity that will transform the east side of Birmingham. A six million dollar grant by the Alabama Department of Labor’s Abandoned Mine Land Pilot Program will help fund the park located on approximately 105 acres of undeveloped land, which includes several pre-1977 abandoned coal mines. The technology park status and proximity to I-20 can help attract Lessees in a variety of industries such as aerospace, automotive, various types of light manufacturers, and R & D.”

Jefferson County Commissioner Steve Ammons (R) told reporters that the Technology Park was “a giant step forward” for eastern Jefferson County.
Commissioner Ammons credited George Barber and the Barber Motorsports Park and Museum for being “transformative for the area.”

The Barber Motorsports Park and Museum is already the largest tourist attraction in the state, outside of the beach.

Jefferson County Commissioner Jimmy Stevens (R) said that adding the Southern Museum of Flight to the same site will draw even more tourists.

Stevens estimated that the new Southern Museum of Flight “will be three or four times” as large as the existing museum next to the Birmingham International Airport.

Com. Ammons said that transportation: the I-20 corridor, the proximity of I-459 and I-59, and that the airport is close by means that this site will be attractive to companies.

The site is in the City Limits of Birmingham and adjoins the City of Leeds.

Birmingham City Councilman Hunter Williams, who represents the area said that, “Many groups have come together to make this a reality.”

Williams said that the Grand River Technology Park fills a need for, “Sites that are prepped and site ready.”

Dr. Jones told APR, “During the site selection process, companies look to locate within technology parks, also called “tech” parks or research parks, because of the close proximity to complimentary organizations. Collaboration allows innovation and discovery to take place. When researchers, academia, and industry colleagues interact within technology parks, the shared knowledge and support they receive often allows them to progress through hurdles more easily than if isolated. Grand River Technology Park will be a tremendous economic boost for the Birmingham/Leeds/Jefferson County area.”

U.S. Steel has a long history in the Birmingham area.

“For decades U.S. Steel used its land in the Birmingham metro area for mining and minerals to support the local steel industry; but as the Birmingham metro area grew and the mining and minerals were mined out of the ground, like the coal that is deep under our feet today, the best use of our property moved from mining and minerals to real estate development and thus U.S.S. Real Estate was born,” Cowden explained. “Our charge was and still is today to put that property to work to find value added use that build our communities that surround the land. In this area has several planned communities Trace Crossings, the Preserve, Oxmoor, Ross Bridge, and of course Grand River. All of these communities are carefully planned to maximize green space and to be livable and really lovable places.”