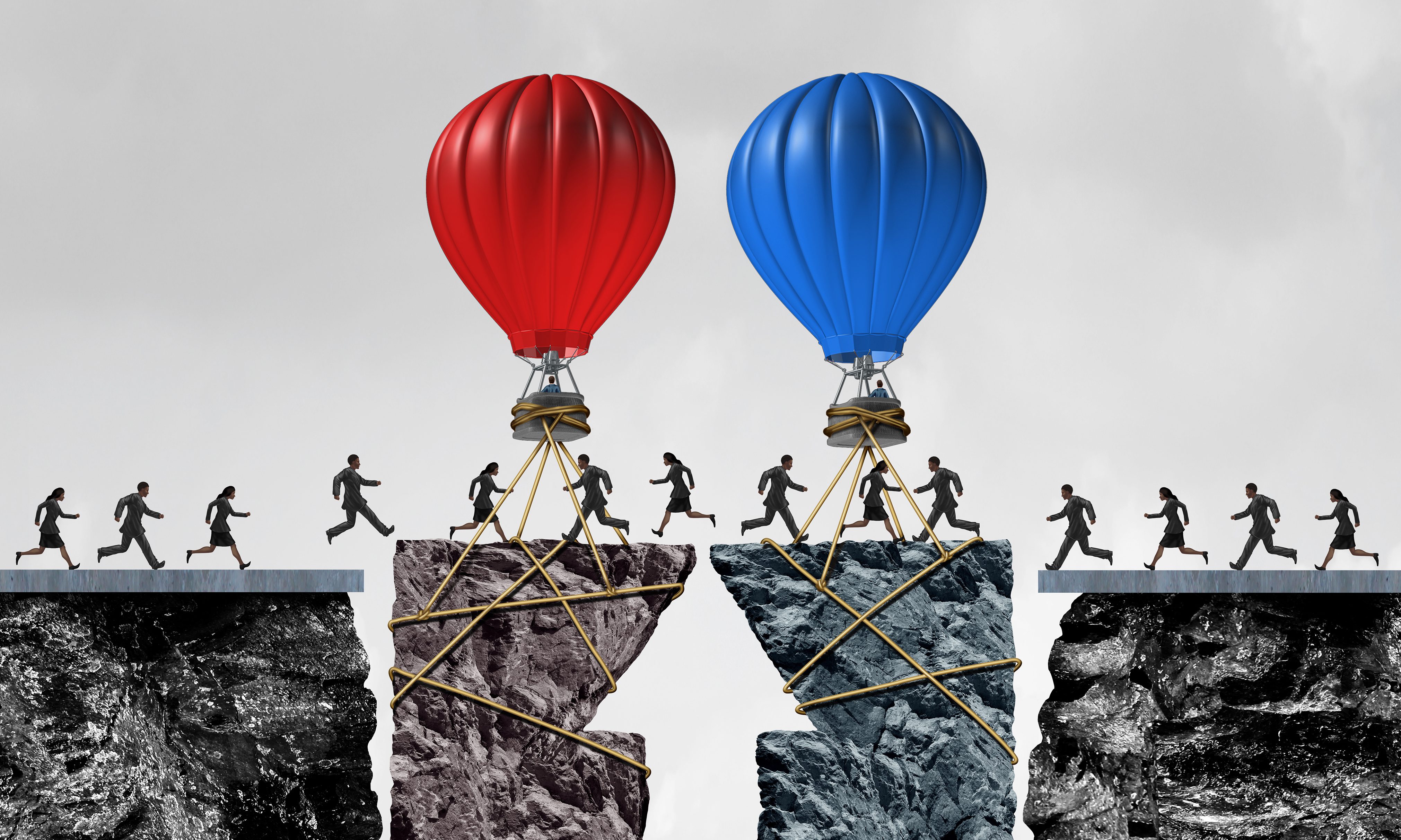 Business team coordination or political bipartisan support and group connection success as people connected by a limited time opportunity with balloons connecting a bridge for a successful exchange with 3D illustration elements.

Gov. Kay Ivey, in a press statement condemning the impeachment inquiry aimed at President Donald Trump, followed the script being used by most Republicans. But in the governor’s statement, she added a decidedly Ivey-twist saying Washington D.C. should take a page from Alabama’s playbook.

“I say Congress should take a page out of our book here in Alabama,” Ivey said. “Our achievements are accomplished through strong, bipartisan efforts, and we are seeing great progress for that.”

Citing Alabama’s legislative process as bipartisan would seem laughable coming from anyone other than Ivey. Those who work closely with the governor say she would prefer to work in a bipartisan way but is often limited by the nature of Alabama’s Republican supermajority.

It’s not that Ivey isn’t a conservative, but her life experience and general leadership style is to build consensus when possible, according to those who know her best.

Ivey’s most public legislative accomplishment to-date was the passage of a fuel tax increase to address the state’s failing infrastructure. Passing the Rebuild Alabama Act took a coalition of not only Republicans and Democrats but business and civic leaders across the state. The tax remains unpopular in many corners of the state, but it is an example of doing what is best for the state’s future rather than what is politically expedient at the moment.

Quietly, Ivey is marshaling forces to enact sweeping criminal justice reform as well as an effort to overhaul the state’s education system; both reform efforts will require a bipartisan coalition.

When Ivey succeeded Gov. Robert Bentley following his resignation, she immediately reached out to both Senate and House Republicans and Democrats, a rare instance of leadership in these hyper-partisan times.

The governor’s efforts to reach a consensus between the two political parties have not always been successful mainly because lawmakers in the Alabama House and Senate are partisan creatures more beholden to a radical political-base than the people as a whole.

Privately, some Democrats feel the administration has not always followed through on promises made to bring about compromise having seen them fall far short of what was their understanding of the deal. However, this has not kept Democrats from working with Ivey. Most Democrats point to those legislative leaders who they say have more than once gone back on their word, generating distrust at the State House.

So, it is that Ivey’s bipartisan quote is more aspirational, but it’s better than letting partisan national media set the tone for the state.

Not surprisingly, Democrat and Republican state lawmakers and many of their constituents appear more attuned to national politics than the needs of the state.

Alabama’s lawmakers would do well by turning off Fox News and MSNBC ahead of the coming Legislative Session. Neither Fox or MSNBC have a clue about Alabama, but what they do know is how to divide people, especially politicos.

Likewise, policy solutions from D.C. think tanks or other states are no blanket answers to Alabama’s most pressing problems. Can the state learn from them? Yes. But policy is best when it’s homegrown. While the Brookings Insitute or the Heritage Foundation may form a political base for ideological debate, it is no substitute for homegrown thinking.

When Ivey says that Alabama’s challenges require Alabama solutions; she is not offering a political platitude but sound reasoning.

Yes, naysayers will point to Ivey’s real and perceived weaknesses, but that’s just so much fodder for keyboard warriors and internet trolls.

As Republican President Theodore Roosevelt wrote, “It is not the critic who counts; not the man who points out how the strong man stumbles, or where the doer of deeds could have done them better. The credit belongs to the man who is actually in the arena, whose face is marred by dust and sweat and blood; who strives valiantly; who errs, who comes short again and again because there is no effort without error and shortcoming; but who does actually strive to do the deeds.”

Building prisons, justice reform and education expansion will undoubtedly be issues Gov. Ivey will push in the upcoming session. Both prisons and justice reform will take bipartisanship if for no other reason than to give cover to Republicans.

Other significant issues are facing the state that require a coalition of the willing.

Senate leadership continues to say there is no way to expand Medicaid, but as with other issues, the state can solve any problem with a strong bipartisan push.

Ivey should also consider addressing the unfair and unproductive gaming wars that disproportionately benefit one group while leaving the state with only legal bills and very little in tax revenue.

Some may see Ivey’s statement on bipartisanship as merely political hyperbole, especially in the context of impeachment.

But there’s truth in Ivey’s words; the state can accomplish much when it looks at what is possible rather than what plays well in the next election.

Alabama has many necessities. The question is, “Can the state leadership find homegrown bipartisan solutions?”

Yes, they can with the proper bipartisan leadership.

Let’s hope Ivey follows through on her words. Alabama may not be the most partisan state in the Union, but it could be.