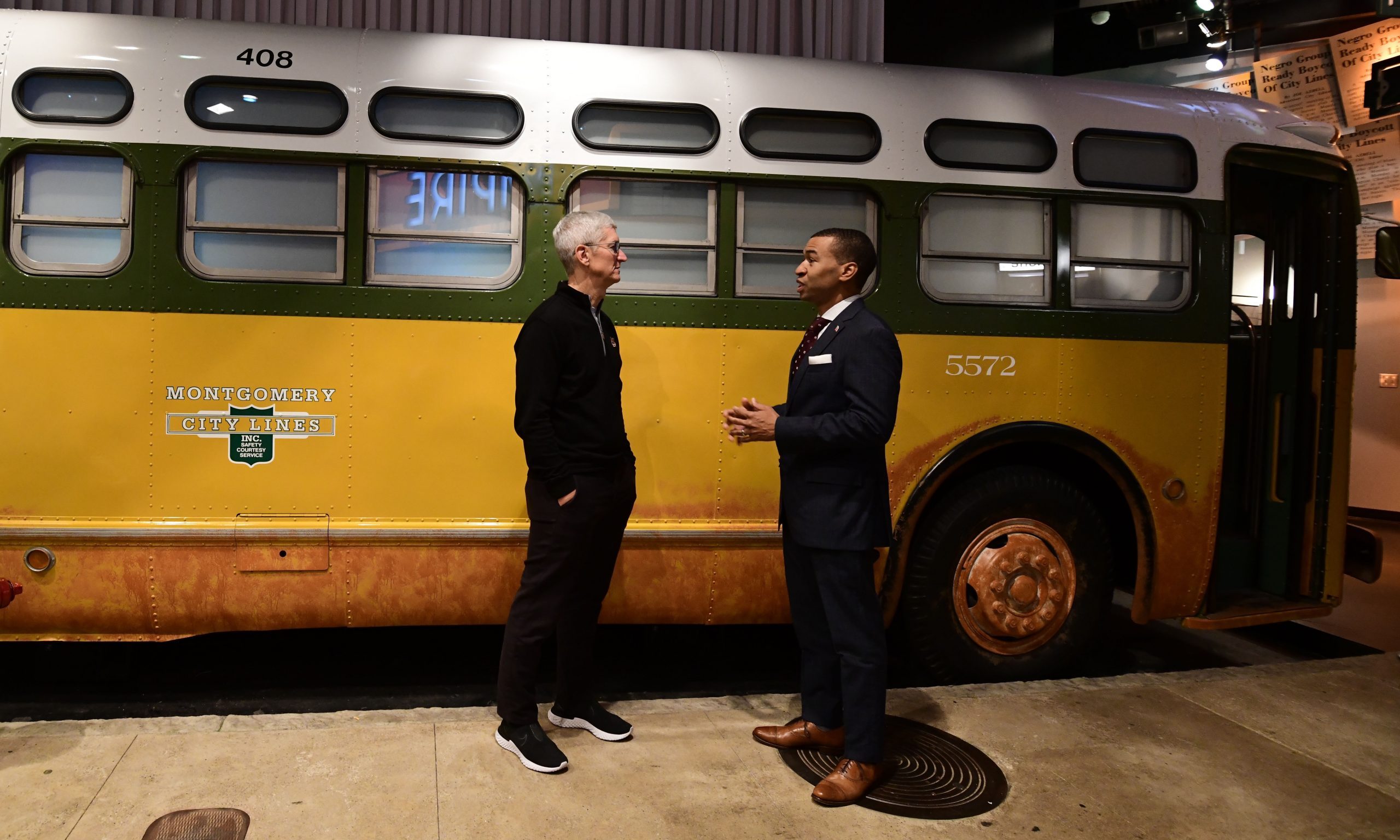 Apple CEO Tim Cook was in Montgomery on Sunday for a tour of Troy University’s Rosa Parks museum with Montgomery Mayor Steven Reed.

“64 years ago today, Rosa Parks changed the course of history by refusing to give up her seat on a bus,” Cook said on social media. “In that one act, she stood for equality and justice for all of us. Proud to mark this moment with a visit to Montgomery, AL with @stevenlouisreed.”

64 years ago today, Rosa Parks changed the course of history by refusing to give up her seat on a bus. In that one act, she stood for equality and justice for all of us. Proud to mark the moment with a visit to Montgomery, AL with @stevenlouisreed. pic.twitter.com/L24UVvlbbw

Steven Reed is the first Black Mayor in the history of Montgomery.

“Thanks Tim! I enjoyed talking with you at the @RosaParksMuseum about her life of courage and the importance of upholding her legacy of activism,” Reed replied. “Let’s keep doing our part.”

Thanks Tim! I enjoyed talking with you at the @RosaParksMuseum about her life of courage and the importance of upholding her legacy of activism. Let’s keep doing our part https://t.co/T5Ts911ddr

At 6 p.m. Alabama State University will hold its 64th Anniversary of Montgomery Bus Boycott remembrance at First Baptist Church at 347 North Ripley Street in Montgomery. The keynote speaker will be Dr. Julius Scruggs.

The Rosa Parks statue was dedicated on Sunday in Montgomery.

“On the 64th anniversary of the Montgomery Bus Boycott, we honor Rosa Parks by dedicating this statue in her name,” Gov. Kay Ivey said on Twitter. “I hope its presence will remind us of the struggles of the Civil Rights Movement & ensure that future generations will be better & do better. #AL200 #AL200Countdown.”

Ivey was joined at the dedication by Montgomery County Commissioner Elton Dean and Mayor Reed.

The civil rights memorials are a partnership between the City of Montgomery, Montgomery County, the Alabama Department of Tourism and the Montgomery Area Business Committee for the Arts.

Troy University’s Rosa Parks Museum is an active memorial to the life of civil rights icon Rosa Parks and the lessons of the Montgomery Bus Boycott that brought racial integration to transportation and international attention to civil rights. The museum is at the site where Mrs. Parks was arrested. It is the only museum dedicated to Rosa Parks.

The museum’s collection contains a number of historically significant artifacts including the original fingerprint arrest record of Mrs. Parks, a 1950s-era Montgomery city bus, original works of art including statuary and quilts, court documents and police reports, as well as a restored 1955 station wagon (known as a “rolling church”) used to transport protesters during the boycott by Blacks of the Montgomery transit system.

On Dec. 1, 1955, Rosa Parks, a 42-year-old black woman, refused to give up her seat to a white man as the law required. Parks was arrested for civil disobedience.

The Montgomery NAACP reacted by declaring a boycott of the Montgomery bus system. The boycott lasted 381 days until finally the city was forced to capitulate. The boycott drew national and international attention to the Jim Crow laws in the South at the time and established the Reverend Dr. Martin Luther King Jr. as the head of the Civil Rights Movement.

Eventually, the U.S. Supreme Court ruled in Browder v. Gayle that segregation of public transit was unconstitutional. Parks could not find work following the events of 1955 and had to leave Alabama. Eventually, she worked for Congressman John Conyers, D-Michigan, for 20 years. She sometimes is credited as being, “The Mother of the Civil Rights Movement.” Parks died on Oct. 24, 2005.