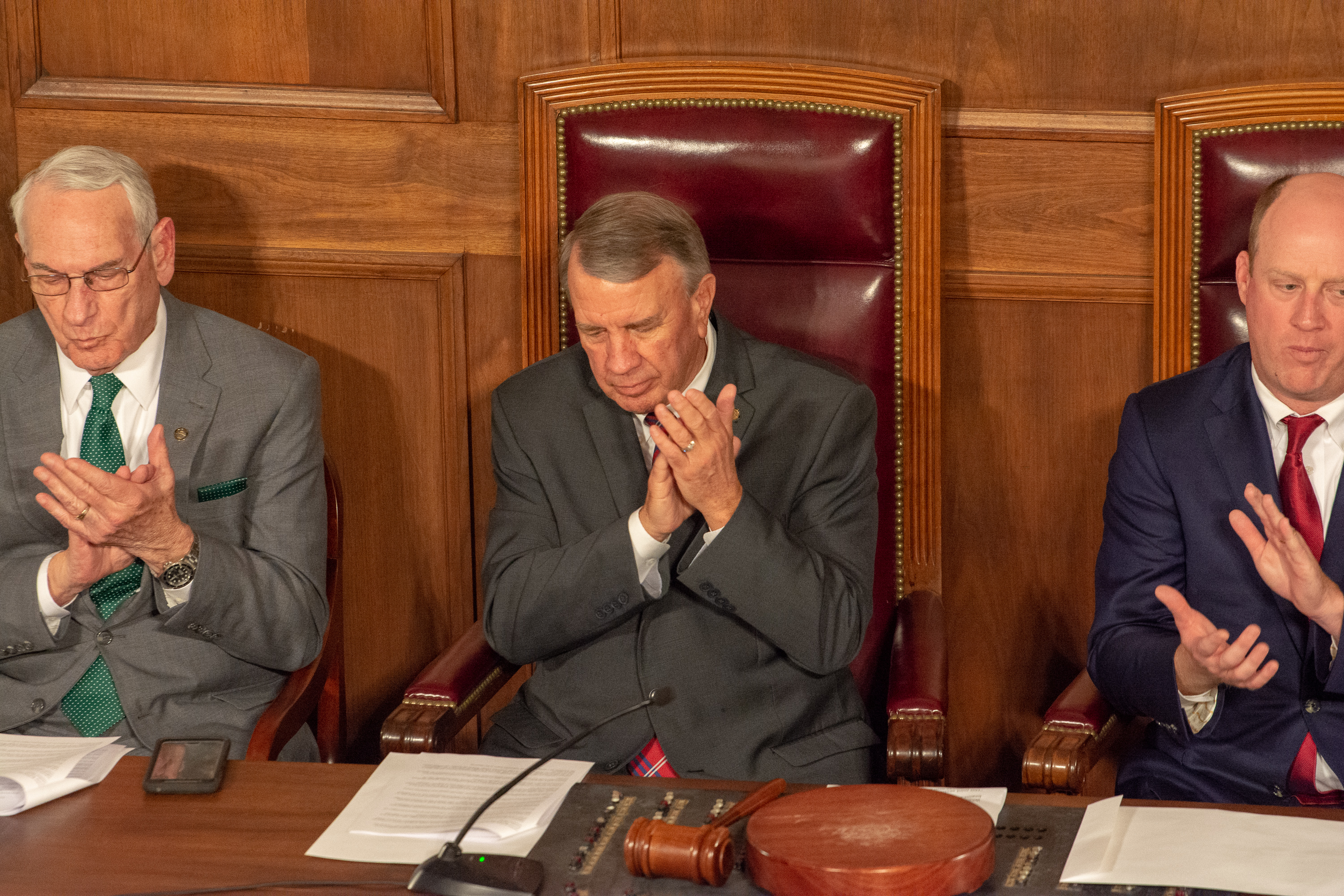 Speaker Mac McCutcheon claps as Gov. Kay Ivey delivers the 2019 state of the state address before a joint session of the Alabama Legislature in the Old House Chambers of the Alabama State Capitol on March 5, 2019. (Chip Brownlee/APR)

House Speaker Mac McCutcheon, R-Monrovia, said Wednesday that he is open to a deal on gambling.

The speaker of the House was in Auburn for the Alabama Association of County Commissioners meeting.

“The lottery has been up for the last two years,” McCutcheon said. “Here is the bottom line in the (Republican) caucus. Out of the 77 members, 18 are not for any gambling at all. It takes 63 votes to pass a constitutional amendment. I needed votes from the (Democratic) minority, but because of some of their local concerns that didn’t happen. Unless their local bills with the bingo issues were passed they wouldn’t support it.”

McCutcheon said that some counties want their own bingo and some want to reopen their racetrack.

“This is where we are. We have got a lottery over here that would generate $150 to 180 million,” McCutcheon said. “We have got the Poarch Creek Indians” who have come and offered to enter into a compact.

McCutcheon said that the Indian proposal would allow them to continue doing what they are doing now with the possibility of adding some gaming facilities in other parts of the state. In exchange, they would bring revenue into the state.

“I am not a big gambling guy; but if you are going to vote for a lottery, that’s gambling, then don’t be a hypocrite and let’s get the biggest bang for the buck,” McCutcheon said. “Let’s address a lottery, the Poarch Creek Indians, and these counties that want a one-armed gambling. Put them all in a room and hammer out a deal.”

“It would be ridiculous to sell us out for $150 million when there could be $700 million,” McCutcheon said. “It is going to be hard to just pass a lottery.”

The speaker warned though that if he cannot get a grand deal between all the parties on gambling then there likely would not be any gambling bill brought forward in 2020.

“If not let’s take it off the table,” McCutcheon said.

In the 2019 Alabama legislative session, State Sen. Jim McClendon, R-Springville, introduced a lottery bill that would have created a statewide lottery but also included online gaming and video lottery terminals at the existing bingo facilities in Shorter, Birmingham, Greene County, and Mobile.

The Poarch Creek Band of Indians and a number of legislators found that bill objectionable.

State Sen. Greg Albritton, R-Atmore, introduced a much more conservative lottery proposal for a paper lottery only, with no online lottery playing or video lottery terminals. This made the racetracks and a number of legislators angry.

The McClendon bill stalled in the Senate Tourism Committee, while the Albritton lottery plan passed out of the Senate. In the House of Representatives, Democrats demanded that video gambling in Macon and Greene Counties be legalized or they would not support the lottery bill.

There was also a great deal of discussion about where the money should go. The Albritton bill had originally earmarked all the money for the states beleaguered general fund budget.

The House Tourism Committee gutted that proposal and shifted money to education, even though the education trust fund budget had a record surplus from the income taxes generated by the booming economy.

That still wasn’t enough for House Democrats who then demanded gambling in both Macon and Greene Counties and that the money earmarked for the SGF go instead to Medicaid expansion rather than the construction of three proposed mega prisons.

When the House Tourism Committee version of the bill finally got to the floor of the House late in the session, it died a quick death.

The 2020 legislative session begins on February 4.

There are a lot of criticisms of the gambling bill. Here's an explanation for why most of them fall flat.