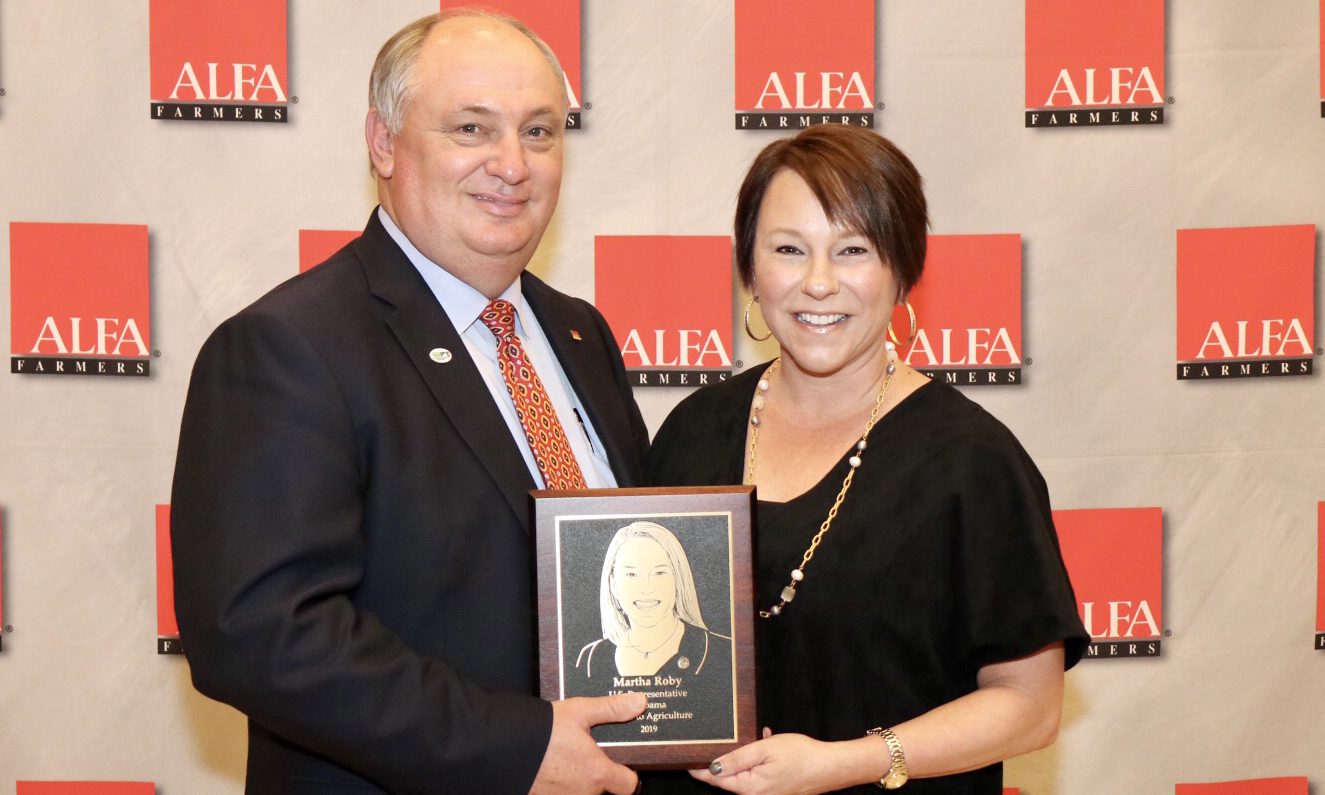 The five term congresswoman for the Second Congressional District has been a dogged advocated for Alabama farmers during her tenure in Congress.

“Roby has been a champion for farmers since she was first elected to Congress in 2010,” said Federation President Jimmy Parnell in a statement. “Whether fighting for fairness in the farm bills of 2014 and 2018, or battling budget cuts in farm programs, it was clear she was in agriculture’s corner.”

“Rep. Roby’s grit and determination ensured farmers weren’t forgotten by other leaders in Washington and earned her the respect of agricultural leaders at home and in Congress,” Parnell said. “She enjoys a reputation as an outspoken proponent of conservative, Christian values that mirror those of her constituents in Alabama’s 2nd Congressional District. Her work as a former member of the House Committee on Agriculture played a pivotal role in passing the 2014 and 2018 farm bills.”

ALFA cited her work highlighting abuses at the Central Alabama Veterans Health Care System (CAVHCS) as among her accomplishments. The Farmers Federation also cited her work on behalf of farmers on the House Appropriations Committee, her support of Alabama’s Military bases when she was on the House Armed Forces Committee, and her Chairing of the Peanut Caucus in the Congress.

“In working on two farm bills, Congressman Roby was a strong advocate for the peanut program, seed cotton and catfish inspection,” ALFA National Affairs Director Mitt Walker said. “She was also a staunch supporter of eliminating rules and regulations that hampered farmers and landowners in her district and across the state.

“After her district was ravaged by Hurricane Michael, she insisted that Alabama be treated the same as neighboring states, making sure U.S. Secretary of Agriculture Sonny Perdue saw the damage in her district firsthand,” Walker added. “On a personal note, Rep. Roby is one of the most genuine and compassionate people I have ever had the privilege to work with.”

“Alfa has been a true friend to me during my time in Congress,” Roby said. “We have developed a strong relationship. Since agriculture and forestry are the largest employers in the district and in our state, I take the role as the farmers’ advocate very seriously. I have prioritized spending time with farmers over the years. Whether it was standing in a peanut field or meeting with farmers after a disaster, what they have to say is important to me.”

An estimated 1,400 farmers and their families are in Montgomery Sunday and Monday for their annual convention.

Roby is not seeking a sixth term in the U.S. House of Representatives. She will be retiring from Congress when her current term ends.