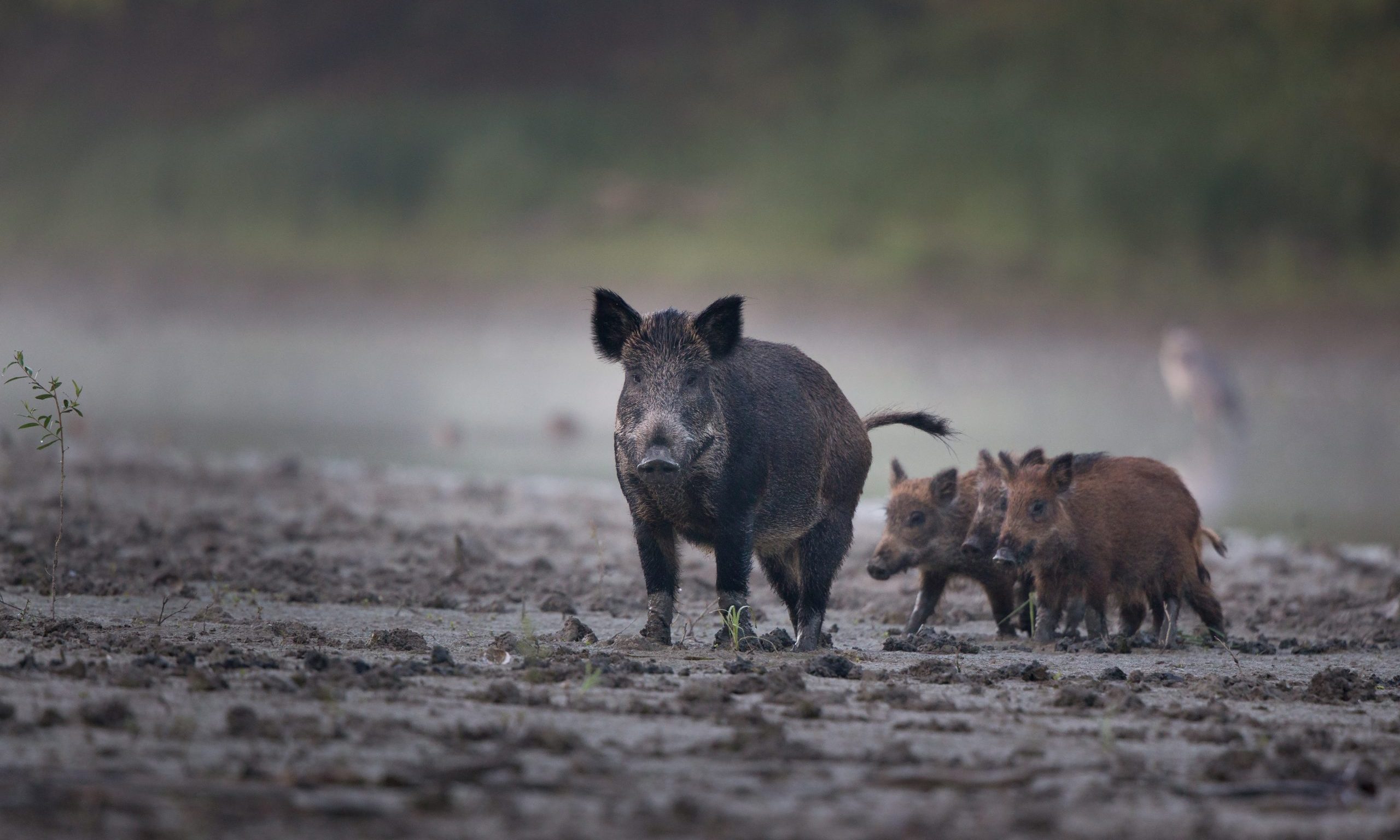 In 2020, a three-year pilot project for feral swine control will start in select watersheds around Alabama.

This money translates to 14 fulltime technicians who will work with Alabama landowners to remove feral pigs.

USDA will award 10 states more than $16.7 million to deal with the feral swine problem. The projects are part of the Feral Swine Eradication and Control Pilot Program (FSCP). This is a joint effort between USDA’s Natural Resources Conservation Service (NRCS) and Animal and Plant Health Inspection Service (APHIS).

“We are very pleased to see additional resources being allocated to combat agricultural damage caused by feral swine,” President Parnell said. “Increased federal funding for control efforts has been a priority for the Federation and this, in addition to increased funding through the annual appropriations process, will go a long way to support our farmers as they manage feral swine.”

The 2018 Farm Bill provides $75 million for the FSCP over the life of the farm bill.

Hogs are very hardy, reproduce rapidly, are omnivorous, and have no native predators in Alabama. Hogs were first introduced into Alabama by the Spanish Conquistador Hernando De Soto in 1540. The wild hog herd is based largely on domesticated pigs that escaped from Alabama farms. In more recent times, hunters have introduced Russian Wild Boars to the state to improve hunting. It is now illegal to transport live wild hogs or to release them into the wild due to the damage that they do both to Alabama’s agricultural crops and the native flora and fauna that they devour.

Original reporting by the Alabama Forest Owner’s Association and the Alabama Farmer’s Federation contributed to this report.

Congressman Bradley Byrne, R-Alabama, on Friday announced that Seth Morrow will serve as his chief of staff.

“As we enter the last half of 2020, my office remains busy assisting constituents and advancing our legislative priorities. I know Seth shares my focus on finishing out my term in Congress strong, and he is well prepared to move into the Chief of Staff role,” Byrne said in a statement. “My staff and I will continue working hard every day to fight for the people of Southwest Alabama and advance our conservative agenda.”

Morrow is a native of Guntersville and has worked for Byrne since June 2014, serving as deputy chief of staff and communications director.

“I am grateful for this opportunity, and I’m committed to ensuring our office maintains our first class service to the people of Southwest Alabama. Congressman Byrne has always had the hardest working team on Capitol Hill, and I know we will keep that tradition going,” Morrow said in a statement.

Morrow replaces Chad Carlough, who has held the position of Byrne’s chief of staff since March 2017.

“Chad has very ably led our Congressional team over the last few years, and I join the people of Southwest Alabama in thanking him for his dedicated service to our state and our country,” Byrne said.

LaTosha Brown, a Selma native who co-founded Black Voters Matter, issued a statement saying that it is time to reimagine American democracy.

The co-founder of an organization that is working to mobilize Black voters in Alabama and elsewhere used the 55th anniversary of the Voting Rights Act on Thursday to call for a new federal agency to protect voting rights nationwide.

LaTosha Brown, a Selma native who co-founded Black Voters Matter, issued a statement saying that it is time to reimagine American democracy.

“The Voting Rights Act should be reinstated, but only as a temporary measure. I want and deserve better, as do more than 300 million of my fellow Americans,” Brown said.

The U.S. Supreme Court invalidated a key provision of the law in a 5-4 ruling in 2013, eliminating federal oversight that required jurisdictions with a history of discrimination to get approval before they changed voting rules.

“To ensure that the Voter’s Bill of Rights is enforced, we need a federal agency at the cabinet level, just like the Department of Defense,” Brown said. “A Department of Democracy would actively look at the patchwork of election systems across the 50 states and territories. With federal oversight, our nation can finally fix the lack of state accountability that currently prevails for failure to ensure our democratic right to vote.”

She cited excessively long lines, poll site closings and voter ID laws in the recent primaries in Wisconsin, Georgia, Kentucky and Texas as voter suppression techniques that disproportionately affect Black and other communities of color.

Brown said that the July 17 passing of Rep. John Lewis, who was nearly killed marching for voting rights in Selma in 1965, has amplified calls for the Voting Rights Act to be strengthened. That’s the right direction, she said, but it isn’t enough.

“History happens in cycles, and we are in a particularly intense one. We have been fighting for the soul of democracy, kicking and screaming and marching and protesting its erosion for decades,” Brown said.

Both parties in Congress and the White House hoped to have agreement on a bipartisan coronavirus relief bill, but those hopes appear to have been dashed after a Thursday night meeting at the White House.

The Washington Post reports that the White House and Democrats failed to reach an agreement late Thursday night on the fifth virus relief bill. White House officials and Democratic leaders ended a three-hour negotiation with no agreement and both sides far apart on basic issues.

Pelosi said that the meeting was “consequential,” but blamed Republicans for the breakdown in negotiations.

Mnuchin said that if the administration decides that further negotiations are futile, Trump would move ahead unilaterally with executive orders to address things like unemployment aid. Schumer said Democrats were “very disappointed” in how the meeting went and that any White House executive orders could be challenged in court.

Pelosi claimed that Meadows pounded the table at one point. Meadows denies the allegation.

“We are very far apart,” Pelosi said. “It’s most unfortunate.”

Over 30 million unemployed Americans will see their unemployment checks dramatically cut next week without an extension of benefits. Trump has suggested that he could increase the benefits through unilateral executive action. Critics suggest that would be unconstitutional.

Democrats want about $1 trillion in aid for cities and states, but Trump has dismissed that demand as a “bailout” for mismanaged states and has agreed to just $150 billion in aid for states.

Meadows said that the White House has agreed to go above $1 trillion, but that Democrats still have refused to go below $3.4 trillion. Democrats are also pushing for more money for food stamps, child care and the U.S. Postal Service as part of the plan. All of this would be paid with more deficit spending.

Dismukes is charged with first-degree theft of property in connection with a theft that occurred at his place of employment between the years 2016 to 2018.

Alabama State Rep. Will Dismukes, R-Prattville, has been accused of theft of property, a Class B felony. (WSFA)

An arrest warrant has been issued for Alabama State Rep. Will Dismukes, R-Prattville, for felony theft from a business where he worked, Montgomery County District Attorney Daryl Bailey said Thursday.

Dismukes is charged with first-degree theft of property in connection with a theft that occurred at his place of employment between the years 2016 to 2018, Bailey said during a press conference.

Bailey said the charge is a Class B felony and levied when a person steals in excess of $2,500 and that “I will tell you that the alleged amount is a lot more than that.”

“The warrant has just been signed, his attorney has been notified and we are giving him until late this afternoon to turn himself in,” Bailey said.

Bailey said the employer contacted the district attorney’s office with a complaint about the theft on May 20, and after reviewing bank records and interviewing witnesses, the decision was made to charge Dismukes with the theft.

WSFA reported Thursday that the theft occurred at Dismukes’ former employer, Weiss Commercial Flooring Inc. in East Montgomery. Bailey did not provide any more specifics on the charge but said the employer signed the arrest warrant after countless hours of investigation on the part of the DA’s office.

While the charge stems from a complaint filed months ago, Dismukes been in the headlines recently and faced a torrent of calls for his resignation in recent weeks after posting to Facebook an image of himself attending a birthday celebration for the first grand wizard of the Ku Klux Klan, Nathan Bedford Forrest.

The event was hosted by an individual with close ties to the League of the South, a hate group, according to the Southern Poverty Law Center.

In response, Dismukes stepped down from his post as a pastor at an Autauga County Baptist church but defiantly refused to step down from the Legislature.

If convicted of the felony, Dismukes would be immediately removed from his seat in the Alabama House, to which he was elected in 2018.

In June, the Alabama Democratic Party called for his resignation over previous social media posts glorifying the Confederacy.

Alabama GOP chair: “We expect our elected officials to follow the law” after Dismukes arrest