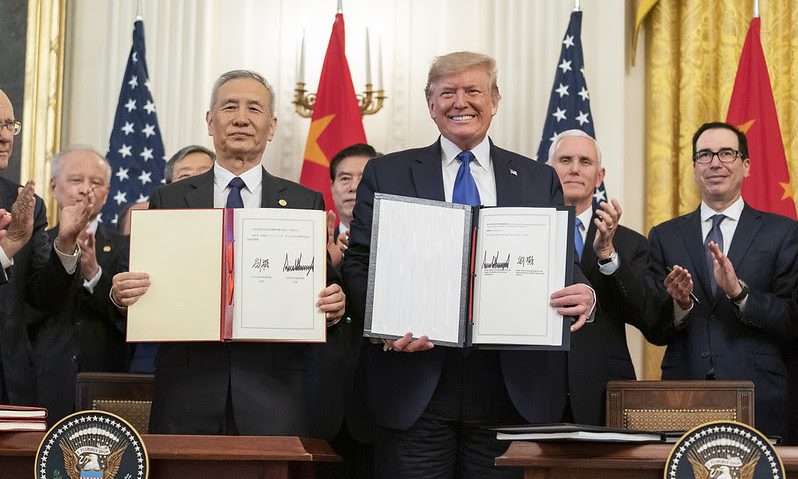 Wednesday, President Donald J. Trump (R) was joined by the Vice Premier of China in the East Room of the White House. Together, they signed phase one of a new trade agreement that rebalances this vital trade partnership between the two economic superpowers while boosting American businesses, farmers, manufacturers, and innovators.

The deal, which includes a commitment from China to buy more U.S. agricultural goods, was praised by the Alabama Farmers Federation. The Trump administration said China has pledged to increase its spending on all American goods by $200 billion over the next two years compared to 2017 levels. At least $40 billion of that total will be spent on U.S. farm goods, a dramatic increase from what it was before Pres. Trump’s effort to renegotiate the trade agreement by leveeing tariffs on Chinese imports.

“This trade deal is a step in the right direction and a welcome sign for our farmers who have been dealing with low commodity prices,” said Alabama Farmers Federation President Jimmy Parnell. “We appreciate the administration fighting for better trade deals for agriculture.”

“Today’s signing is an important step in giving America’s farmers and ranchers the ability to get back to business in the global market,” Duvall said. “This agreement will help turn around two years of declining agricultural exports. The potential of tens of billions more in exports is welcome news for farmers who are eager to compete on a more level playing field.”

“From day one, my Administration has fought tirelessly to achieve a level playing field for the American worker,” President Trump said. Before he took office, Washington had long tolerated unfair trade practices that buoyed special interests while hurting U.S. working- and middle-class families.

“I’m putting the American people first!” Trump said this morning. “For years, politicians ran for office promising action to remedy these practices, only to do nothing but allow them to continue. Unlike those who came before me, I kept my promise . . . Now, our efforts have yielded a transformative deal that will bring tremendous benefits to both countries.”

The new agreement makes good on a number of key promises to fix trade with China:

First and foremost, China has pledged to increase imports of American goods and services by at least $200 billion. The Trump administration says that China will be stocking up on goods from U.S. farmers—between $40 and $50 billion worth.

For the first time ever, China agreed to end its practice of forcing American companies to transfer their technology to Chinese companies as a condition for doing business there.

Beijing has agreed to stronger commitments on its practices regarding currency devaluations and exchange rates.

The work on a phase-two deal is already underway.

“With this signing, we mark more than just an agreement. We mark a sea change in international trade. At long last, Americans have a government that puts them first at the negotiating table,” President Trump added.

The White House said that a stronger America, of course, doesn’t come at the rest of the globe’s expense. On the contrary, when the United States is thriving, it makes the world a safer, more stable place. A better and fairer trade partnership with China will do much of the same.

The administration claimed that starting today, a new era of harmony, prosperity, and commerce officially begins.

Hooper also noted that the U.S. Mexico Canada Trade Agreement passed out of committee in the Senate the same day.

APR asked Hooper is he thought that Speaker Nancy Pelosi, D-California, chose such an historic day where they were two big historic wins for the Trump administration to finally transmit the Articles of Impeachment to the Senate.

“I can’t say whether it was a coincidence or not,” Hooper said. The Democrats have been plotting this since they took over the House.

Hooper cited the signing of the phase one trade agreement with China, the pending USMCA passage, peace through strength, decreasing illegal immigration, the booming economy, historically low unemployment, and the construction of 400 miles of new border wall as key achievements of the Trump administration.