The first district Congressional race is probably the best race in the state in this year’s March 3rd Primary.  The winner of the March 31st GOP Primary runoff will go to Congress.  The famous first district is a Republican congressional seat and has been since Jack Edwards won the seat in the Southern Goldwater landslide in 1964.

The bulk of the district population is in the two county gulf coast counties of Baldwin and Mobile.  It being the only gulf coast district in the state, they do have some local issues like red snapper fishing, and their infamous Bay 10 bridge and Bayway project.  However, for the most part the candidates are focusing on national issues like international affairs, gun control, health care, the environment, immigration and abortion. As is apropos for Republican Congressional candidates, there are all trying to tie themselves to Donald Trump.

There are three clear frontrunners, Mobile County Commissioner Jerry Carl, State Representative Chris Pringle andformer State Senator Bill Hightower, all from Mobile.Commissioner Carl has been a Mobile County Commissioner since 2012. Pringle is a state legislator from Mobile. Bill Hightower served one term in the Alabama State Senate, then made an unsuccessful bid for governor in 2018. The three seem to be knotted in a close three-man race.  It will be interesting to see which of the three make the two-man March 31st primary.

The seat is open because Bradley Byrne is running for the U.S. Senate.  Byrne had to choose to either continue in his seat or go for the brass ring. Byrne is a very viable candidate in the Senate race.  However former Senator Jeff Sessions is favored to lead the March 3rd Primary and runoff, and then take back his U.S. Senate seat in the November General Election.

Sessions will settle in for a six-year term.  Probably his final.  He is 73 years old and will be 74 when he takes office next January.  Therefore he will be a 74–year–old freshman senator.  That is not the optimum age to become a U.S. Senator again.

Seniority is everything in Washington. Seniority still prevails dominantly.  It is absolutely king.  Sessions does not portray the national image and stature that our Senior Senator Richard Shelby enjoys, much less the power, prestige and ability to bring home the bacon to the Heart of Dixie. Indeed, during their 20 years of service together as our tandem in the Senate, Shelby has overshadowed Sessions not only in seniority but in power and accomplishments.

Actually, Sessions does not mind playing second fiddle to Shelby.  He prefers it.  During his 20-years in the Senate, he enjoyed playing the role of being the ultimate conservative ideologue.  He was and will once again become one of the most conservative members of the Senate and will spend his time on social issues like immigration, abortion or other rightwing noneconomic issues.  Sessions will be the darling of Fox News and will ask for his seat back on the Judiciary Committee, which does absolutely nothing for Alabama.  Sessions does not really want to be effective.  He is the ultimate ideologue.

Even though Sessions will be 74 in January of 2021, his chief rivals for the GOP nomination, Tommy Tuberville and Bradley Byrne will be 66 and 65, respectively – not exactly spring chickens.  Those are not the perfect ages to enter the U.S. Senate. By the same token, if by some remarkable miracle upset Doug Jones wins this years race, he would not be the perfect effective Senator for Alabama as a 65–year–old Democrat.

Thank goodness for the Heart of Dixie we have Richard Shelby as our Senior U.S. Senator.  When you have the Chairman of the U.S. Senate Appropriations Committee, you really do not need a second Senator.  Seniority is everything in Washington. 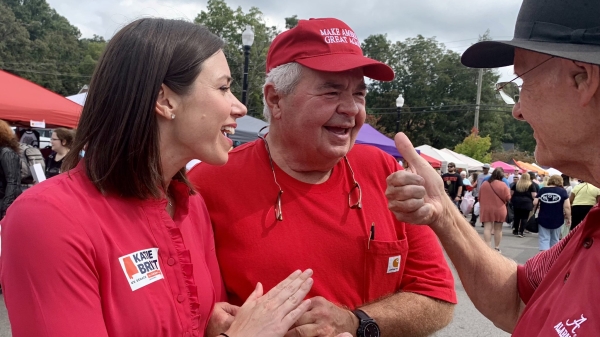 The coalition, named “Students for Katie Britt,” is comprised of high school and college students.