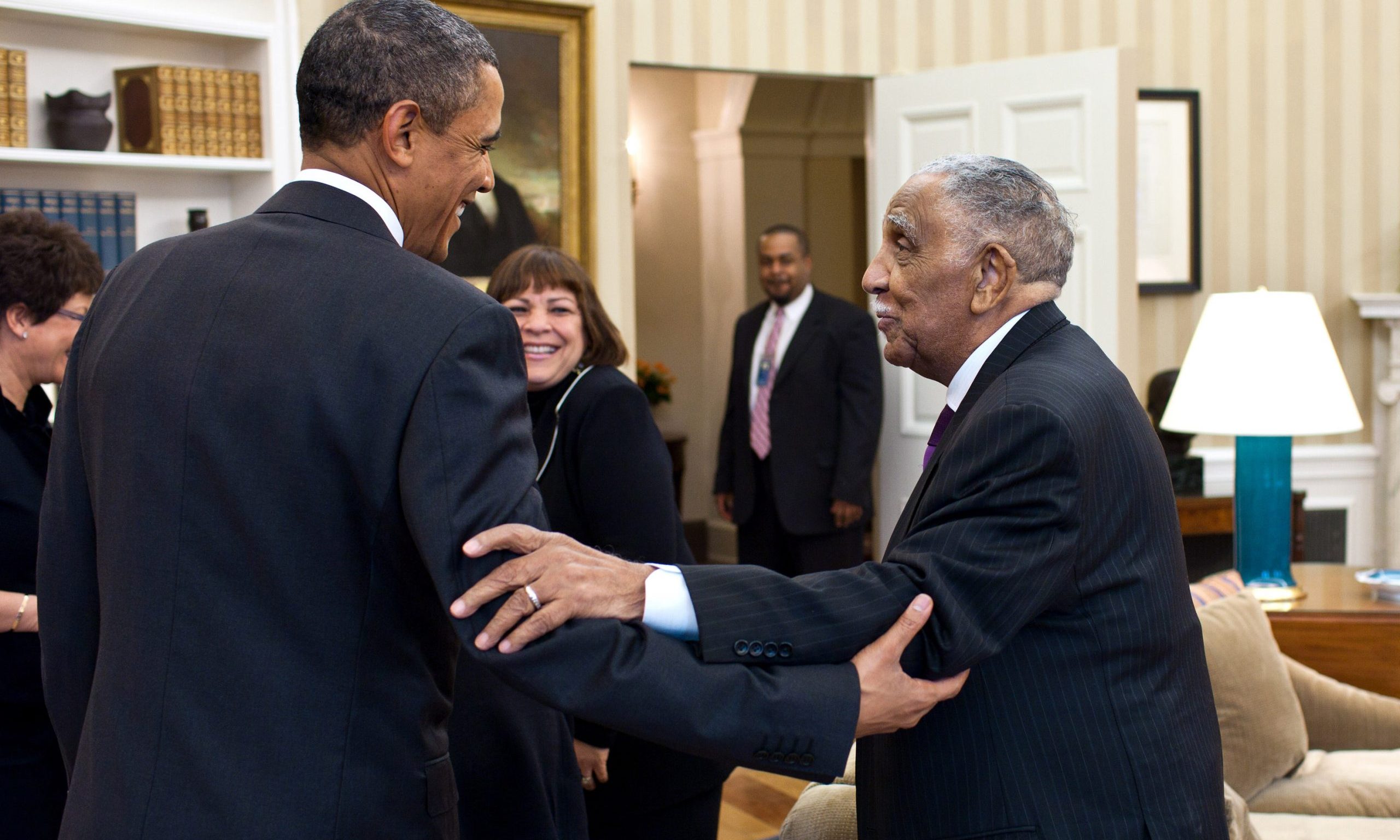 President Barack Obama meets with civil rights movement leader Rev. Dr. Joseph Lowery and his family in the Oval Office, Jan. 18, 2011. (Official White House Photo by Pete Souza) This official White House photograph is being made available only for publication by news organizations and/or for personal use printing by the subject(s) of the photograph. The photograph may not be manipulated in any way and may not be used in commercial or political materials, advertisements, emails, products, promotions that in any way suggests approval or endorsement of the President, the First Family, or the White House.Ê

Lowery was a founding member of the Southern Christian Leadership Council along with Dr. Martin Luther King Jr. and was a valued member of King’s inner circle during the Civil Rights Movement. After King was assassinated Ralph David Abernathy took over the role leading the SCLC. In 1977 Lowery succeeded Abernathy and would go on to head the influential civil rights group as President for twenty years.

“RIP Rev. Joseph Lowery. A civil rights icon and a drum major for justice whose legacy will live on in all of us he touched,” Congresswoman Terri Sewell (D-Selma) said on social media.

Lowery was born in Huntsville in 1921. After graduating from high school, he studied at Knoxville College and Alabama Agricultural and Mechanical College before earning a bachelor’s degree in 1943 from Paine College, a Methodist institution in Augusta, Georgia. Lowery then entered the seminary at Paine Theological Seminary to become a Methodist minister. After his graduation, Lowery became the Pastor of the Warren Street United Methodist Church in Mobile. He also became president of the local Alabama Civic Affairs Association. Lowery married his wife Evelyn in 1950. They had five children.

Lowery worked with King throughout the Civil Rights Movement of the 1950s and 1960s. Both men believed in nonviolence to achieve the goal of ending segregation. Following the Montgomery bus boycott, Lowery, King, Abernathy, and Fred Shuttlesworth formed the SCLC to strengthen their work throughout the South.

In 1960, Lowery, Shuttlesworth, Abernathy, and Solomon Seay were sued for libel by the Montgomery police commissioner over an advertisement in the New York Times to raise funds for King’s legal defense. King was facing felony charges for allegedly false statements in his 1956 and 1958 Alabama tax returns. The all-white jury found in favor of the plaintiff and ordered the defendants to pay $500,000 in restitution ($4,570.000 in today’s dollars). Lowery had his car seized and sold at public auction to pay the judgement. The U.S. Supreme Court overturned the libel verdict in 1964, in New York Times v. Sullivan.

Lowery moved to Nashville in 1961 where he continued to lead marches and sit-ins against segregation in public facilities while continuing his leadership role in the SCLC.

In 1964, Lowery became the pastor of St. Paul United Methodist Church in Birmingham until 1968.

Lowery was a loyal friend and supporter of Dr. King. He stood with King through personal crisis and aided King by tying up loose ends while King was jailed in Selma in February 1965. Lowery spoke at King’s memorial service in Atlanta following his assassination.

In 1968, Lowery became the pastor of Central United Methodist Church in Atlanta. Lowery aided Abernathy at the SCLC and took over as the president of SCLC. In 1977. Lowery continued to speak out for civil rights but also expanded the group’s focus to opposing apartheid in South Africa and human rights issues in the Middle East. In 1982, Lowery and Jesse Jackson led a march from Tuskegee to Washington, D.C., to promote the extension of the Voting Rights Act of 1965.

Lowery retired from the church in 1992, and left the SCLC in 1997, but remained active in a number of causes even in retirement. Lowery received the Lifetime Achievement Award from the NAACP. In 2001 Clark Atlanta University established the Joseph E. Lowery Institute for Justice and Human Rights. In 2009 he was awarded the Presidential Medal of Freedom by President Barack H. Obama (D). His wife, Evelyn, died in 2013.

“Dr. Joseph E. Lowery was a mentor and friend of mine,” said Martin Luther King III. “He worked closely with my father, as the Chair of SCLC board of directors and my mother throughout her lifetime and especially during her tenure at the King Center. As the President of SCLC who succeed him, I always valued, respected and appreciated his advice and counsel.”

“His service as SCLC’s president was also important because it came about at a critical time in the history of our nation when there were efforts to turn back the “clock of progress.,” King continued. “Dr. Lowery’s work and leadership personified SCLC’s theme “To Save The Soul of America.” He believed there was a place in the movement for everyone. Dr. Lowery was an “old school” Civil Rights leader and an excellent preacher and teacher who always used his God-given talents to promote social justice and the uplift of the poor and marginalized. He will be sorely missed. My wife, daughter and I extend our heartfelt condolences to his family.”