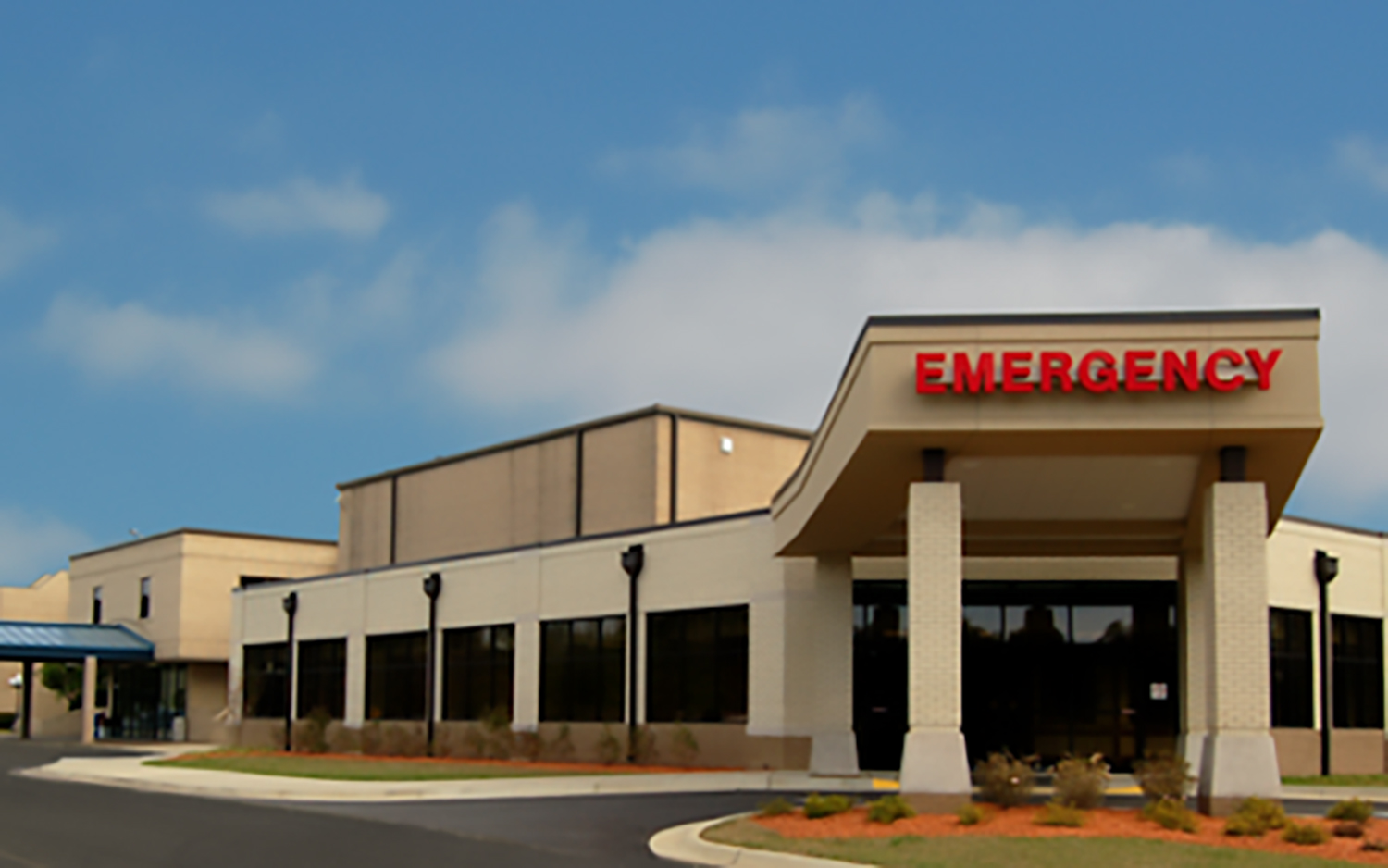 More than half of Alabama’s hospitals were already in a precarious situation before coronavirus.

Rural hospitals were in much worse shape. Nearly 90 percent of them had negative operating margins before the coronavirus outbreak. In the last eight years, at least 13 hospitals have closed in the state. More than half were in rural areas.

The last to close was Pickens County Medical Center in Carrollton, Alabama, which closed last month, leaving the rural county west of Tuscaloosa without a hospital. The next-closest hospital is more than 30 miles away.

But with COVID-19 impacting nearly every aspect of life, even in Alabama’s least-populated counties, hospitals, especially the small ones, have gone from bleeding money to hemorrhaging it.

“Hospitals around the country are struggling. Everyone’s bleeding. It’s just that we have less blood,” said Ryan Kelly, the executive director of the Alabama Rural Health Association, a group that represents the state’s rural hospitals and clinics. “If everyone is dying, we’re going to die quicker. It’s not a good position to be in.”

The outbreak of the coronavirus has forced officials to take extraordinary measures to protect the public. But these measures, meant to protect hospitals from being overwhelmed, are also exposing a deep and precarious situation underlying Alabama’s health care system.

Smaller budgets mean less to trim. There is only so much that can be cut. And if it was trimmable, these cash-strapped hospitals have probably already cut it. More efficiency can’t solve these hospitals’ problems.

The pandemic prompted state officials to cancel elective procedures, which are generally more profitable and account for a large portion of most hospitals’ revenues.

“Elective surgeries were really the only way some of these hospitals could make money,” Williamson said. “Coronavirus is seriously stressing hospitals.”

But elective procedures being canceled or postponed is not the only hit hospitals are taking. Sources of revenue from many other nonessential services have also dried up.

Fewer patients are showing up in emergency rooms, Kelly said, further cutting into costs. Telehealth and telemedicine is a growing revenue stream at these hospitals, but it is not yet in a position to match the lost revenue.

“It’s a tough position for everyone to be in,” Kelly said. “Most of our revenue was built off these other procedures that have largely stopped or, at a minimum, slowed.”

Kelly said Medicaid expansion, at this point, wouldn’t be a “silver bullet” to solve the financial problems facing the state’s rural hospitals, though it could help. The Alabama Hospital Association, though, has advocated for Medicaid expansion to bolster revenues for the state’s hospitals and expand health care access.

Williamson also fears that hospitals could be forced to eat the costs of treating uninsured COVID-19 patients who may require hospitalization as the outbreak spreads. The state’s refusal to expand Medicaid under the Affordable Care Act — when most of the cost of the expansion would have been borne by the federal government — has resulted in a larger uninsured population in Alabama. Some 16 to 20 percent of adults in the state are uninsured. Bearing the cost of that uncompensated care could add to the strain.

One of Congress’s coronavirus response bills, the CARES Act, has $100 billion in funding for hospitals across the country. But that cash has not arrived yet, and no hospital is certain how much money it will get and if it will be enough to stabilize the balance sheets.

“Once it begins to be distributed, that will serve as a major help for hospitals, but it’s just not there right now,” Williamson said.

And many of the state’s hospitals don’t have a lot of money on hand to wait weeks or months for help. Some only have days, especially the rural hospitals, Kelly said.

“I would say that you could put good money on another hospital or two or four closing, but I’m certainly praying that does not happen,” Kelly said. “But really these hospitals only have days or weeks of cash on hand. You disrupt that revenue cycle any, and you could end up in a pretty big predicament.”

Kelly said some estimates have said hospitals could face a 20 percent cut in revenue during the COVID-19 crisis — maybe even more. “I have not talked to a single facility yet that has said their business was normal,” Kelly said.

The dire budgetary situation facing more than half of the state’s hospitals has forced some to lay off health care workers and support staff and cut the pay or hours of some of those who can’t stop working.

Williamson and Kelly said they were aware of hospitals being forced to take these cost-cutting measures, but they did not have numbers to show how many hospitals have needed to do so and how many workers and providers have been affected.

Workers at hospitals are not the only health care workers affected by the virus. Dentists, providers at smaller clinics, rehab specialists and other medical practitioners have also been forced to scale back or temporarily shut down operations.

According to the Alabama Department of Labor, some 7,324 health care and social assistance workers filed an initial jobless claim for unemployment insurance in Alabama during the week ending March 28.

Even the state’s larger hospitals like Huntsville Hospital and DCH in Tuscaloosa have cut back the hours of workers in nonessential areas. Huntsville Hospital CEO David Spillers said at a briefing last week that the medical system would lose millions of dollars every month during the pandemic.

Williamson and Kelly said hospitals are doing everything they can to avoid cutting pay or laying off workers. When layoffs have been required, they said they have been in areas that would be the last to respond to COVID-19 cases and the least likely to affect a hospital’s ability to handle a surge.

“But that’s still not ideal,” Kelly said. “Let alone the fact that we need our hospitals right now to be ready in case there’s a surge of COVID-19 cases. So the last thing we want to do is just shut down operations when we might need it.”

The state’s hospitals are facing other problems, too, including shortages of personal protective equipment, Williamson said.

“I’ve got some hospitals that are telling me they have maybe a week’s worth of PPE,” Williamson said. “I’ve got a few others that are feeling that their shortages are more immediate.”

Hospitals have been trying to source PPE — including masks, gowns and gloves — from non-traditional suppliers, through donations and through the state. The Alabama Department of Public Health has secured some additional PPE, Williamson said.

The shortage is causing the prices to go up and making obtaining those essential supplies difficult.

“It is concerning how difficult it is to get,” Williamson said. “But I certainly don’t think we’re in the situation of New York.”

While the state’s largest hospitals like UAB in Birmingham, Huntsville Hospital in Huntsville, EAMC in Lee County and DCH Regional Medical Center in Tuscaloosa will likely bear the brunt of the COVID-19 patient surge, rural hospitals are not immune from it.

Many are already treating COVID-19 patients, Kelly said, and they may be needed to help alleviate the burden on the larger hospitals, Williamson said.

“When you look at how you manage surge, you start by eliminating elective procedures because you want to free up beds,” Williamson said. “But the next part of that plan is you take people who may not have COVID, who may not need the level of acute care provided in urban hospitals, and you transfer some of those patients into, say, a rural hospital.”

But that surge plan requires those rural hospitals to be there to be able to help.

“We’re just trying to hang on,” Kelly said. “You know, targeting cuts and layoffs, and conserve money as best as possible but still be ready for patients coming in. That’s the position that most hospitals are in.”