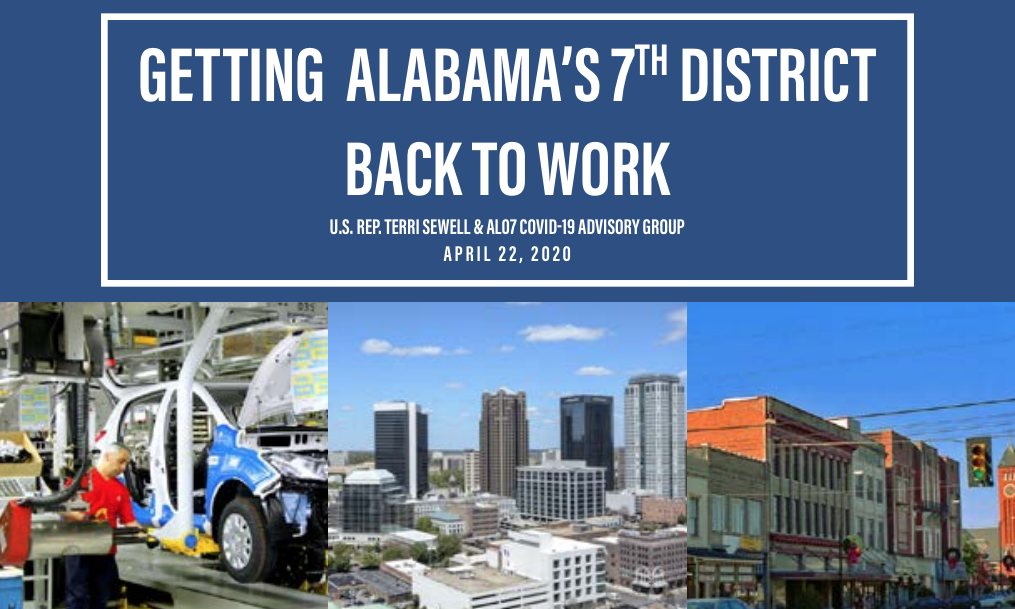 U.S. Rep. Terri Sewell, D-Alabama, believes that to reopen Alabama’s economy fully COVID-19 testing and contact tracing must increase statewide, and especially among minorities, the elderly and those living in rural areas.

Sewell released her report Wednesday on recommendations for safely reopening. The report came at the request of Gov. Kay Ivey, who asked that each member of Congress from Alabama to form groups to formulate individual plans.

To draft her recommendations, Sewell formed the AL07 COVID-19 Advisory Group, made up of health professionals, business owners, non-profits, bankers, farmers, teachers and faith leaders from Alabama’s 7th district. The group partnered with the Public Affairs Research Council of Alabama in the design of a survey, which was used to complete the report.

“The Alabama Department of Public Health’s data shows that to date, the State has tested less than 1 percent of the state’s population. Until our state has tested more Alabamians, using reported hospitalizations provides a more stable and reliable measure,” Sewell said in the report.

The report also states that while they believe hospitalizations are the most reliable data point for determining when it is safe to gradually begin reopening, Alabama officials should also take into consideration declines in overall confirmed cases and COVID-19 related death rates.

There were 197 COVID-19 deaths across Alabama and 5,832 confirmed cases as of Friday, according to the Alabama Department of Public Health. Statewide 768 people have been hospitalized due to the virus.

Testing is being done even less in rural parts of Alabama, and Sewell suggests that state officials increase focus in those vulnerable communities.

“The rural areas of the district have been woefully under tested. The lack of consistent reliable testing sites in the Black Belt is a cause for serious concern,” the report states.

In the Black Belt’s Barbour County just .8 percent of the population had been tested as of Thursday, and in Bullock County .6 percent had received tests, according to Alabama Department of Public Health data.

“Vulnerable communities, including minorities, the elderly, and those living in rural areas, face increased challenges to accessing testing,” The report states. “We must always be mindful of the additional resources needed to expand testing in the Black Belt and minority communities across the state.”

Statewide, as of April 21, Alabama was testing at a rate of approximately 6,000 tests each week. The report notes experts who estimate that Alabama needs to be giving 11,200 tests weekly to move to core-based interventions.

The majority of respondents to Sewell’s survey said that they would feel safe to reopen when testing is widely available, and almost 60 percent said that public health recommendations will have the greatest impact on resuming operations, according to the report. Respondents also said that access to testing is the largest challenge facing their communities.

“We cannot effectively fight the COVID-19 pandemic and protect our constituents from a resurgence later in the year without widespread testing,” the report reads.

Additionally, the report recommends that ADPH hires more people to conduct contact tracing and for state officials to continue to work on stockpiling personal protective equipment.

To keep employees safe the report suggests at first only employees who have no underlying health risks be allowed to return to work, physical distancing should continue when work resumes and personal protective equipment should be given to employees at no cost to them.

In an effort to keep the pubic safe once businesses begin reopening, the report suggests that the public must wear masks when entering a business, and protective items such as gloves, non-surgical masks and hand sanitizer should be offered to customers at entry points.

Ivey is to review each of the recommendations from legislators along with members of her Coronavirus Task Force and is to make a decision prior to April 30, when her Stay-at-home order is to expire.