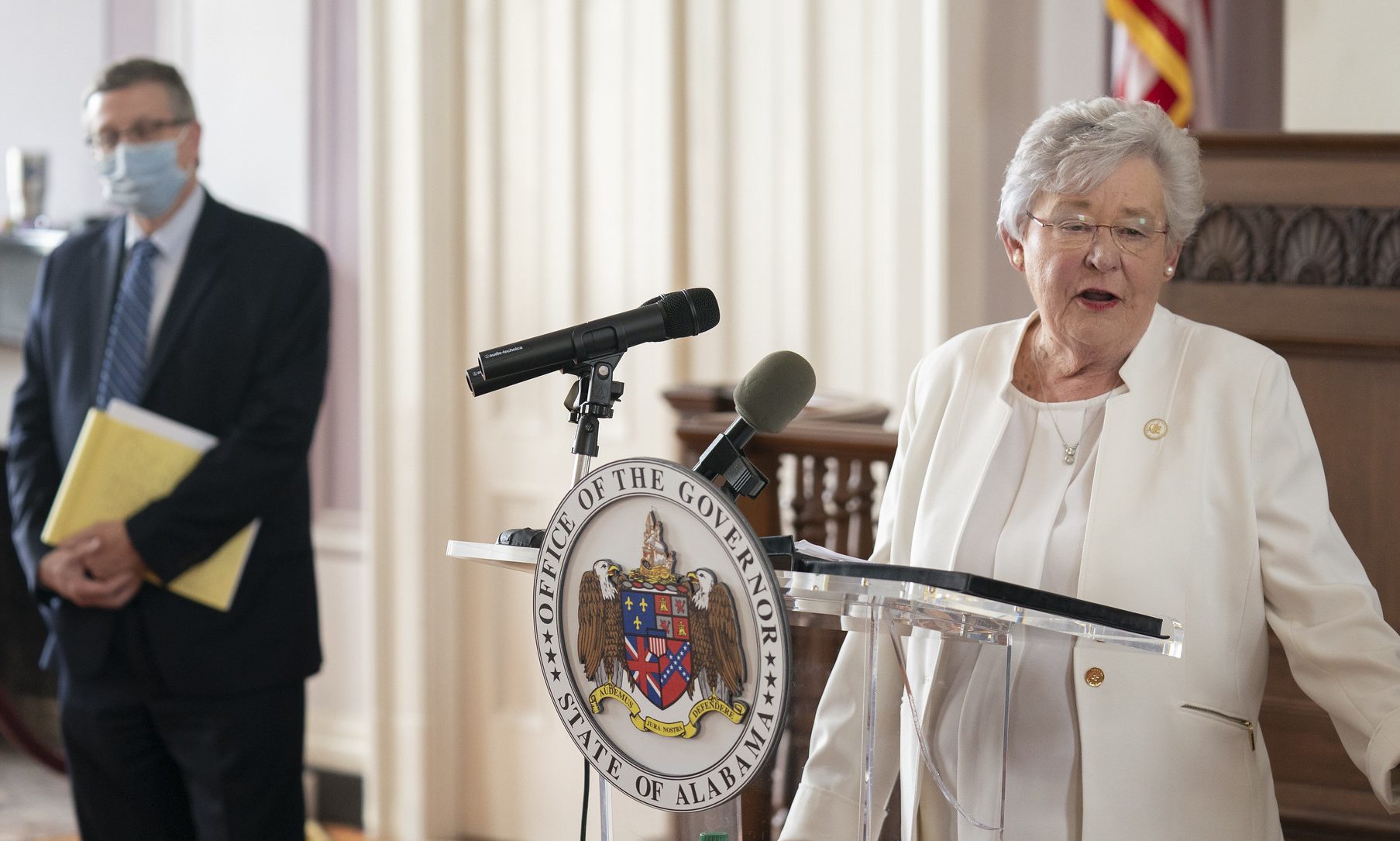 Gov. Kay Ivey held a press conference to update the COVID-19 situation in Alabama Friday May 8, 2020 in Montgomery, Ala. (Governor's Office/Hal Yeager)

But while Ivey extended the Safer-at-Home order though July 31, she didn’t add any new restrictions. The governor says requiring masks is simply too difficult to manage and enforce.

Nobody said fighting the virus would be easy. The problem is neither Ivey nor many other governors, along with the White House, didn’t really make containment much of a priority.

Testing is still inadequate, nearly a half-year after the pandemic started. Alabama’s first diagnosed case was March 13. Since then – as of Wednesday – Alabama has racked up more than 30,000 cases with more than 900 deaths. Nationally, there have been more than 2.6 million cases and nearly 130,000 deaths.

When the pandemic was young, Ivey responded well, ordering everybody to stay home except for essential workers. She did much better than the governors in the state’s surrounding Alabama. But just as with most states across the Southeast, after a few weeks Ivey’s resolve cracked. Like the governors of states like Georgia and Florida, which are also seeing a spike in infections and are setting records.

Ivey should tighten up the restrictions, including closing the state’s beaches over the July 4th weekend. Bars, gyms, and other places where large crowds gather, usually not social distancing and many without masks, should be restricted.

Yes, such measure will continue to cause economic pain, but such restrictions would slow the spread of the virus. We’ve already seen that not just in the United States, but across many parts of the world.

Yes, all of that is difficult, but what are the consequences? More deaths. Just how many deaths are acceptable? Is it 1,000 (we’re almost there), or 2,000, or 5,000? Is any number unacceptable. It doesn’t suffice for elected officials to claim even one death is too many when, through their own actions, thousands and thousands have died in Alabama and across the nation.

And those numbers don’t include infected and once hospitalized patients who are left with permanent organ and lung damage.

Cities like Birmingham and Montgomery have mandatory mask laws, and they need to be enforced because a lot of people are going out without their masks. Still, there are many laws on the books that are difficult to enforce; that doesn’t mean those laws don’t have value. A statewide mandatory mask order if, nothing else, would lead more people to wear masks, plus it would give support to businesses who refuse to allow people inside without masks.

UAB is planning to bring students back on campus when the fall semester begins in late August, but there will be strict safety measures to follow, including wearing masks, social distancing, handwashing, and regular health checks.

Ivey says if the rate of cases and hospitalizations doesn’t slow, she’ll enact more stringent measures. But when she finally gets around to making those decisions, it could very well be too late.

Indeed, it may be too late already.

We’ve seen what indecisive leadership does during a pandemic. What we need to see – in Alabama and nationally – is a more determined response that helps put the virus in check. That includes mask wearing, increased testing, and contact tracing.

Every day that doesn’t happen, more people will get sick and die when they didn’t have to.