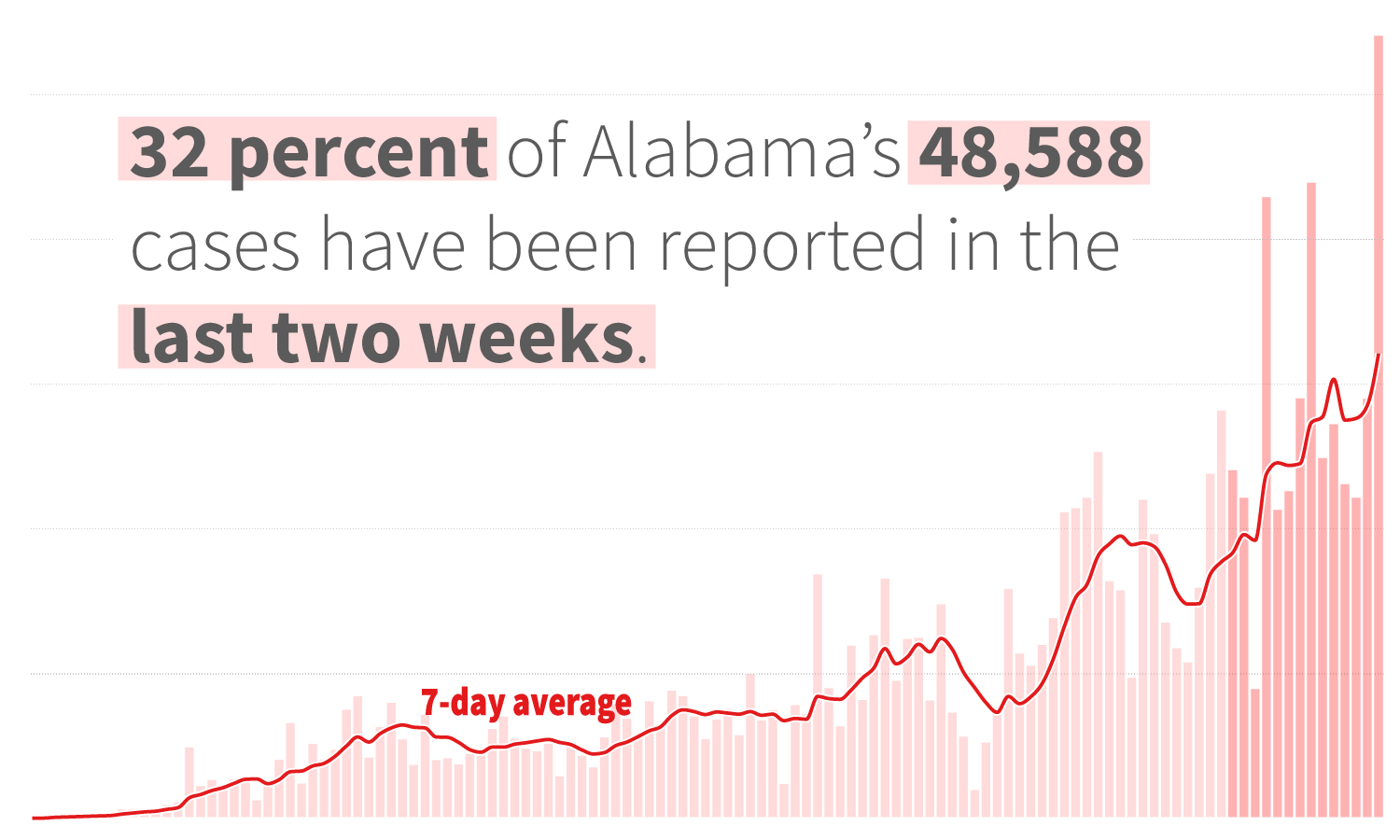 New COVID-19 cases in Alabama on Thursday jumped by nearly double from the day before, and for the first time broke 2,000 in a single day, according to the latest data from the Alabama Department of Public Health.


Thursday’s number of new cases hit 2,164 and blew past the previous daily record set on July 3 by 406 cases. Both the seven-day and 14-day rolling average of new daily cases in Alabama were also at record highs Thursday.

Thirty-two percent of the state’s 48,588 cumulative confirmed cases have been added within the last two weeks.

The Alabama Department of Public Health did not publish Wednesday an update to the total number of tests performed, which throws off the day’s figures for the percentage of tests that are positive, but on average, over the last week, the state’s seven-day rolling average of percent positivity has roughly 15 percent.

Public health experts say the percent positivity should be at or below 5 percent — otherwise there isn’t enough testing being done and cases are going undetected.

Along with surging new cases, the number of COVID-19 patients hospitalized on Wednesday was higher than it’s been since the beginning of the pandemic. On Wednesday 1,110 coronavirus patients were being treated in state hospitals, which was the fourth straight day of record current hospitalizations.

UAB Hospital’s COVID-19 Intensive care units were nearing their existing capacity Tuesday. The hospital has both a COVID ICU and a COVID acute care unit designated to keep patients separated from those who don’t have the virus, but it has more space in other non-COVID units should it need to add additional bed space.


Hospitals in Madison County this week are also seeing a surge of COVID-19 patients. Paul Finley, the mayor of the city of Madison, told reporters Wednesday that local hospitals were reporting record numbers.


Hospitals there were at 80 to 90 percent capacity.

“Our ambulances yesterday had their greatest number of runs since this started,” said Crestwood Hospital CEO Dr. Pam Hudson on Wednesday, adding that in about 20 percent of calls staff is having to wear full personal protective equipment. “That indicates that they are working with patients who have symptoms that could be compatible with COVID.”

Meanwhile, Madison County set a new daily record, adding 286 cases Thursday, the first time the county has surpassed 200 cases a day. The county was largely spared early on in the pandemic, with low case counts and low death rates, but roughly 42 percent of Madison County’s total case count since March has been reported in the last week as 803 new cases have been added.

Jefferson County and Madison County, over the last week, have accounted for 26 percent of the state’s new cases.

Jefferson County led the state in the most new cases Thursday with 343 and has added 1,498 cases in the last week. The county’s total cases increased by 33 percent from last week, and stood at 6,030 confirmed COVID-19 cases Thursday.

At least 1,042 people have died from COVID-19 since March, and at least 26 other deaths are listed as “probable” COVID-19 deaths.