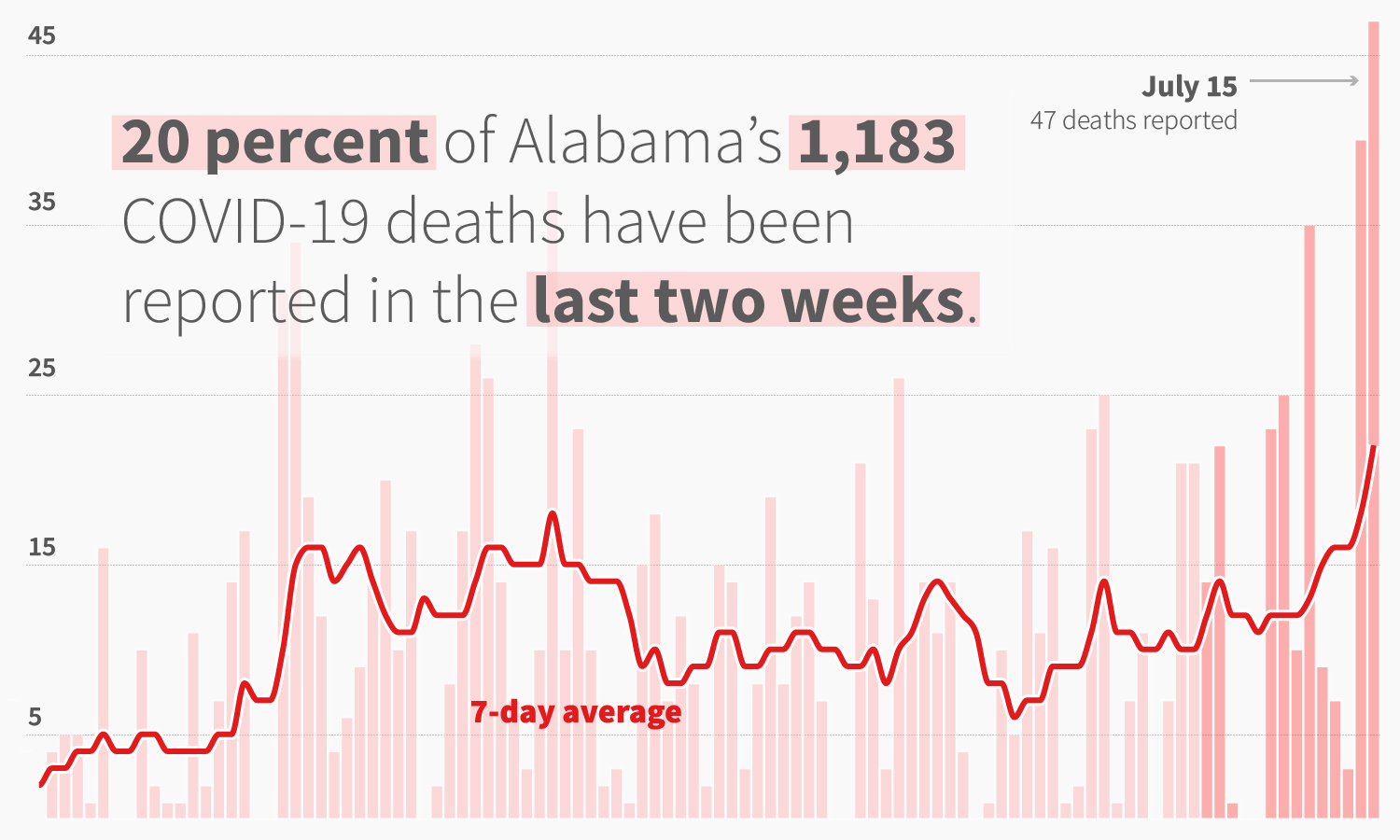 At least 47 deaths from COVID-19 have been reported in the last 24 hours, according to the Alabama Department of Public Health, the largest increase to the state’s COVID-19 death toll in a single day — just a day after the increasing death toll set its previous one-day record Tuesday. Meanwhile, coronavirus hospitalizations are expected to rise again Wednesday after more than a week of record-breaking daily hospitalizations.

The addition of 47 more deaths to the state’s COVID-19 death toll Wednesday broke the previous single-day high of 40 set on Tuesday. The seven-day average of COVID-19 deaths per day was at 22 on Wednesday, which is also a record high. In the last week there have been 151 reported deaths, and in the last two weeks there have been 236 — both are record-high figures.

Nearly 20 percent of the state’s total COVID-19 death toll of 1,183 has been reported in the last two weeks.

While deaths had largely plateaued since early May, the death toll now appears to be surging, weeks after the state began to see rising case counts and hospitalizations. Death from COVID-19 typically occurs weeks after onset of symptoms, and public health experts worry that deaths will eventually rise even higher along a similar trajectory as that of cases, which began to rise several weeks ago.

It may take even longer for deaths to be reported in statewide data. Because deaths most often come weeks after infection — and because death data is even more delayed — the true toll from the state’s current surge in cases may not be seen for several more weeks.

Daily hospitalization numbers for COVID-19 patients statewide for the last ten days have been over 1,000. On Tuesday there were 1,353 coronavirus hospitalizations, the highest it’s been since the start of the pandemic. State Health Officer Dr. Scott Harris, a press conference Wednesday, said more than 2,000 people across the state are currently hospitalized for confirmed or suspected coronavirus — and about 30 hospitals statewide have very limited intensive care bed availability.

At least 1,477 are hospitalized with confirmed COVID-19 Wednesday morning, he said, while 541 are under investigation. The Alabama Department of Public Health has not released today’s figures on its data dashboard yet.

On July 1, the state’s seven-day average of daily COVID-19 hospitalizations was at 711 and was 1,199 on Tuesday, a 68 percent increase in just two weeks.

“There’s nothing inherent in the virus that means it’s going to stop circulating,” said Dr. Don Williamson, president of the Alabama Hospital Association, speaking at a press conference Tuesday. “If we find ourselves, then, in August, in September, with rapid transmission of the virus, we have flu season that has started as early as October in Alabama.”

Williamson said the combination of influenza, which regularly fills state hospitals, coupled with COVID-19 is the “scenario where I become extremely concerned about system wide capacity.”

“There are about 30 hospitals in the state that have very little or no ICU capacity at all,” Harris said Wednesday.

The state on Wednesday saw 1,784 new coronavirus cases, which was the third highest single-day increase of cases since the start of the pandemic. The other two record-high single days were set within the last week.

Both the seven-day and 14-day rolling averages of new daily cases were also at record highs Wednesday.

The surge of new cases doesn’t come down to increases in testing, however.

The statewide positivity rate over the last week — the percentage of all tests that are positive — was 16.29 percent on Wednesday, another record high, when taking into account incomplete testing data from ADPH in early April that inflated the percentages at the time.

Public health experts believe the percentage of tests that are positive should be at or below 5 percent or there’s not enough testing being done and cases are going undetected.

Harris said during Gov. Kay Ivey’s press conference Wednesday announcing her statewide face mask ordinance that the state has added more than 18,000 cases in the last two weeks, and noted the high percentage of tests that are positive.

“So clearly we have more disease circulating in our community,” Harris said.