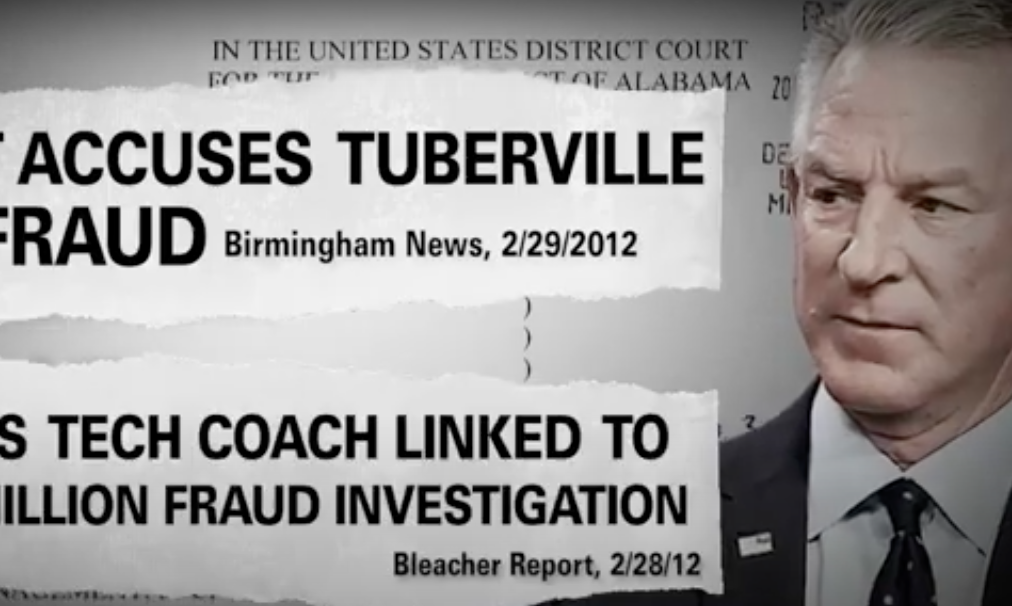 The campaign for U.S. Sen. Doug Jones on Tuesday released its first ad attacking his opponent’s connection to a fraudulent hedge fund that bilked more than $2 million from several Alabamians who invested in the venture.

Tommy Tuberville’s partner in the Auburn hedge fund was sentenced to a decade in prison over what has been described in court records as a “Ponzi scheme,” yet Tuberville was never charged – state and federal investigators said that he was also a victim of the fraud – and a civil lawsuit against the former football coach was dismissed after an undisclosed and confidential settlement agreement.

Tuberville has declined to release the terms of the settlement agreement, but a judge entered a default judgement of more than $7.3 million against Tuberville’s partner, David Stroud, and the business entities the two were partners in.

“An Alabama teacher, and parents saving for their children’s education, lost everything. Tuberville’s partner got ten years in prison. And Tuberville? You guessed it. He said he didn’t have a clue. But he had the money to settle out of court,” a narrator says in the Jones ad.

After resigning as head coach of Auburn football in 2008, Tuberville got a $5.1 million buyout, and stayed on as an advisor to the university’s president for a $250,000 annual salary, as he’d worked out in negotiations before resigning, Tuberville said in his deposition.

Tuberville first met his future partner in TS Capital LLC in New York City in December 2008, during the College Football Hall of Fame banquet, according to a transcript of Tuberville’s deposition in the suit. The day after first meeting him, Stroud sent a car for Tuberville and took him and a friend to visit the trading floor.

In the following days, Tuberville visited Stroud at Stroud’s office in Auburn, and the two began meeting one another regularly for lunch. Stroud began bringing his family over to Tuberville’s home and took a trip with a group of friends to Jamaica with Tuberville, according to court records.

The plaintiffs’ attorney asked Tuberville during his deposition if he’d done any due diligence on Stroud – checked on any possible previous lawsuits or contacted previous employers – and Tuberville said that he had not.

Tuberville on June 29 made his first investment to Stroud Capital Fund of $250,000 on June 29, 2009, and subsequently invested another $200,000 to TS Capital Partners LLC on July 22, 2010, according to court records. In his deposition Tuberville said he understood that the “T” in TS Capital referred to him and the “S” to Stroud.

Tuberville soon had an office inside Stroud’s Auburn office, moved some of his sports memorabilia in and business cards were printed, noting Tuberville as a managing partner in the hedge fund, according to court records. The two men were equal partners in TS Capital, and Tuberville was provided a leased BMW, cell phone and health insurance through one of TS Capital’s bank accounts.

The Birmingham News published an article titled “Ex-Auburn coach drumming up business for a hedge fund and preparing to tackle role as an ESPN analyst.”

“I’m not smart enough to understand the numbers,” Tuberville told the Birmingham News reporter, but added that the market can be intoxicating.

Tuberville became head football coach at Texas Tech in January 2010, and moved there, but there were problems back at TS Capital, and in Sept. 2011, Tuberville got a call from an employee at TS Capital who said that Stroud “wasn’t paying the bills”, according to court records. Concerned investors began calling Tuberville and state authorities kicked off a criminal investigation into TS Capital.

“Now I hear the state securities commission is coming in to investigate. I hope you have everything in order,” Tuberville texted Stroud on Oct. 19, 2011, according to court records.

In February 2012, seven investors sued Tuberville, Stroud and the business entities attached to the investments for securities fraud. An eighth investor later joined the civil suit and an amended complaint was filed with the court.

U.S. District Judge Myron Thompson on May 7, 2013, granted the plaintiffs’ motion for summary judgement against Stroud and the business entities.

The Plaintiffs’ attorney showed bank statements that indicated those expenses as coming from TS Capital’s business account, but Tuberville again said he thought the money was coming from his personal investments, according to court records.

“It came out of TS Capital Partners, LLC.” Tuberville told the plaintiff’s attorney during deposition.

Tuberville’s attorney filed motions with the court asking the lawsuit be dismissed, but the judge ordered the matter to proceed to trial. Tuberville entered into a sealed settlement agreement with the plaintiffs on Oct. 8, 2013.

In a response to APR on Tuesday, Stan McDonald, Tuberville’s attorney and campaign chairman, wrote that in 2009, Tuberville lent his name to an investment company.

“It was a big mistake and he’s paid for it. Coach Tuberville was as surprised as anyone to learn Stroud had lost all the money, including Coach’s,” McDonald said. “He never received a dime — it was a dead loss for him and his family between his initial investment, legal fees and eventual settlement. The Lord humbles us on many occasions, and this was such a moment for Coach.”

McDonald’s statement to APR seemed identical to a statement he made to The New York Times for a July 5 article on Tuberville’s connection to the hedge fund.

Tuberville’s campaign declined to answer APR‘s question as to whether Tuberville would consider releasing the terms of the settlement agreement, however. Stroud has since been released from prison, according to court records.