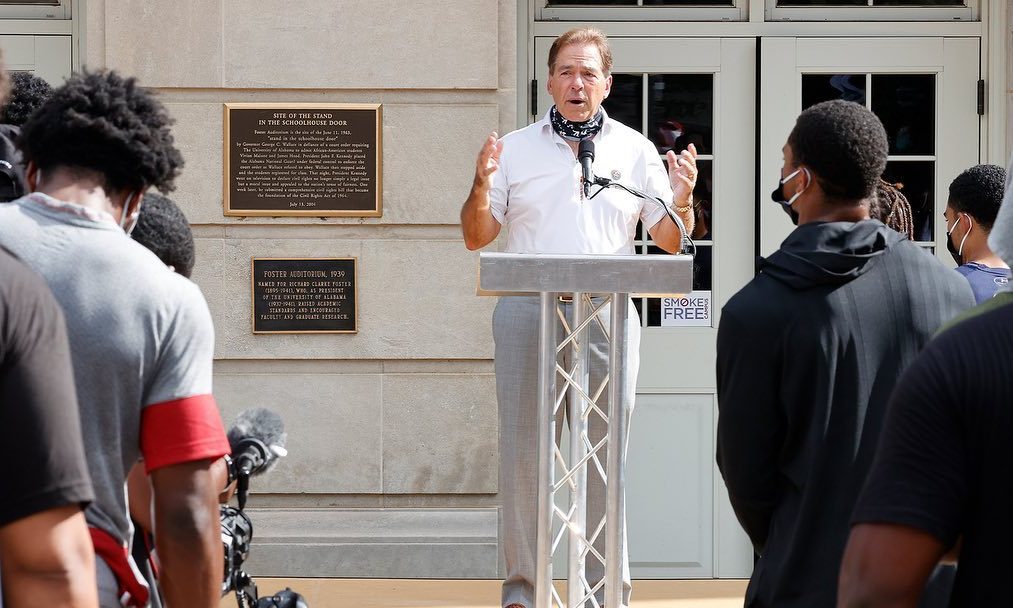 It shouldn’t matter all that much what a couple of football coaches say and do when it comes to matters of racism and equality in this state, and around the country.

It matters because we have, rightly or wrongly, hero worshipped football coaches for a long, long time now. Especially in Alabama, where names like Bear and Shug and Pat and Nick are revered and honored. We’ve listened to their speeches as though they were delivering messages from the Almighty, and bought the products they’ve pitched and marveled at their ability to coach up young men.

To illustrate just how much sway these coaches have in Alabama, a fairly mediocre one, on the basis of his coaching name alone — and I mean that quite literally — is the frontrunner for one of Alabama’s two U.S. Senate seats.

So, yeah, it matters what football coaches do.

Over the last few months, as the country has grappled with the greatest social justice movement since the 1960s (and possibly ever) and the worst pandemic since 1918, Malzahn and Saban, unlike some of their peers, have been consistently out front, outspoken in their support of their Black players and unusually willing to use their football celebrity to advocate for important issues.

Both have cut PSAs. Both have led their teams on marches for social justice. Both have leaned on science and compassion when dealing with COVID-19 issues.

Saban, of course, gets the majority of the media coverage, and rightfully so. He’s the greatest college football coach of all time and his contributions to both the pandemic and social justice issues have been bigger and more pointed. But Malzahn has been out front too, which is a bit of a change for a guy who’s normally low key.

Their voices have mattered — both to their players and to the state as a whole.

You know this because there has been growing outrage among the goobers who gobble up Fox News, and believe the pandemic is a hoax and that racism died when President Obama was elected. And you know this because both coaches have been praised by those who might not ordinarily support such a cause.

Following Tuesday’s march with his players, which ended in front of the same door on the University of Alabama campus where George Wallace tried to block black students from entering, Saban said listening to his players and trying to understand them has given him a better perspective on the issues they face. He encouraged others to listen. He was unusually open about the personal changes he was making.

Malzahn has made similar comments, saying back in June that he just wanted to listen and support his players, to do whatever they felt was best and most effective. It was also Malzahn who encouraged Auburn Athletic Director Allen Greene to publish a social media video that went viral, in which he openly discussed issues of racial injustice.

Greene said that Malzahn’s support was what ultimately led him to publish the video — that the support of Auburn’s head coach mattered that much.

The Alabama players have also talked openly about how Saban’s support and encouragement have emboldened them and led to more positive change around campus.

Because all of your voices matter.

You are respected in your communities, within your locker rooms, and in some cases, all around the state. You have unique perspectives and even more unique insights into the everyday lives of thousands of young people and their families.

And look, maybe the ills of our state shouldn’t fall on you, especially the ills that fall outside of the ones already addressed by the various charity work all of you do. Maybe those ills should fall to the men and women who sit in public offices and take public dollars for the specific job of addressing public problems.

Mainly, they’re failing because every single issue — from child welfare to basic healthcare to even more basic human decency — has been turned into a political issue, to the point that there’s a political winner and a political loser if you get a homeless kid a hot meal and a safe place to sleep.

But as the current situation has shown us, you folks don’t have that problem. You can push for changes because changes need to be made. You can push for human decency and kindness and caring for sick people and feeding the needy and providing every child with a quality education and the means to get it.

And you can do it without politics getting in the way.

So, for all of us who desperately want this state to be better and to do better — and who are growing weary of banging our heads against the wall — could you do a little more?