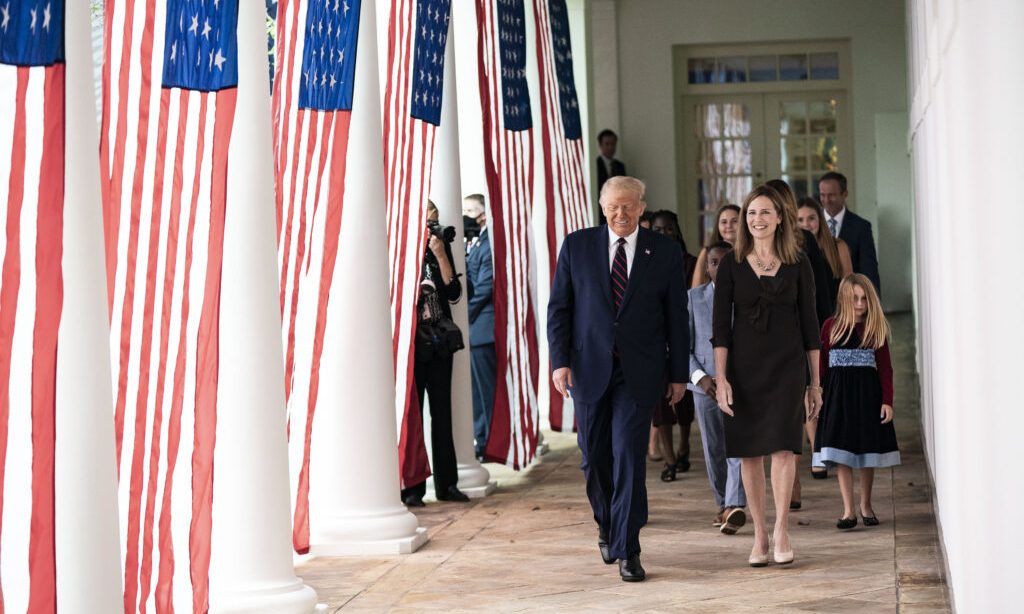 Trump’s nomination of Barrett was met with near universal praise among Alabama Republicans including Gov. Kay Ivey and a number of other elected officials.

“I commend President Trump’s nomination of Amy Coney Barrett to serve on the United States Supreme Court. Judge Barrett will be focused on interpreting the law, being an arbiter and not a lawmaker, as the Supreme Court demands of its justices,” Ivey said. “Based on her proven career and background, I am confident that Judge Barrett will be articulate and a fair supporter of issues important to Alabamians such as protecting the unborn and our Second Amendment rights, while applying the law impartially.”

Barrett has served as a judge on the U.S. Court of Appeals for the Seventh Circuit since 2017. Before becoming a judge, she was a law professor at Notre Dame Law School and previously clerked for Supreme Court Justice Antonin Scalia.

Ivey said Barrett will embody the precedent established by Ginsburg and further prove that a woman can be a wife, a mother, a person of faith and hold strong personal convictions while still effectively performing the duties required of a justice.

“The confirmation process is already proving to be another brutal fight, but I am certain that this is the job for a strong, conservative woman,” Ivey said. “The people of Alabama overwhelmingly supported President Trump in 2016, and I commend him for performing his constitutional duty of nominating to the Supreme Court and getting the job done that we elected him to do. The late Justice Ginsburg herself noted that even in an election year, ‘a president doesn’t stop being president.’” 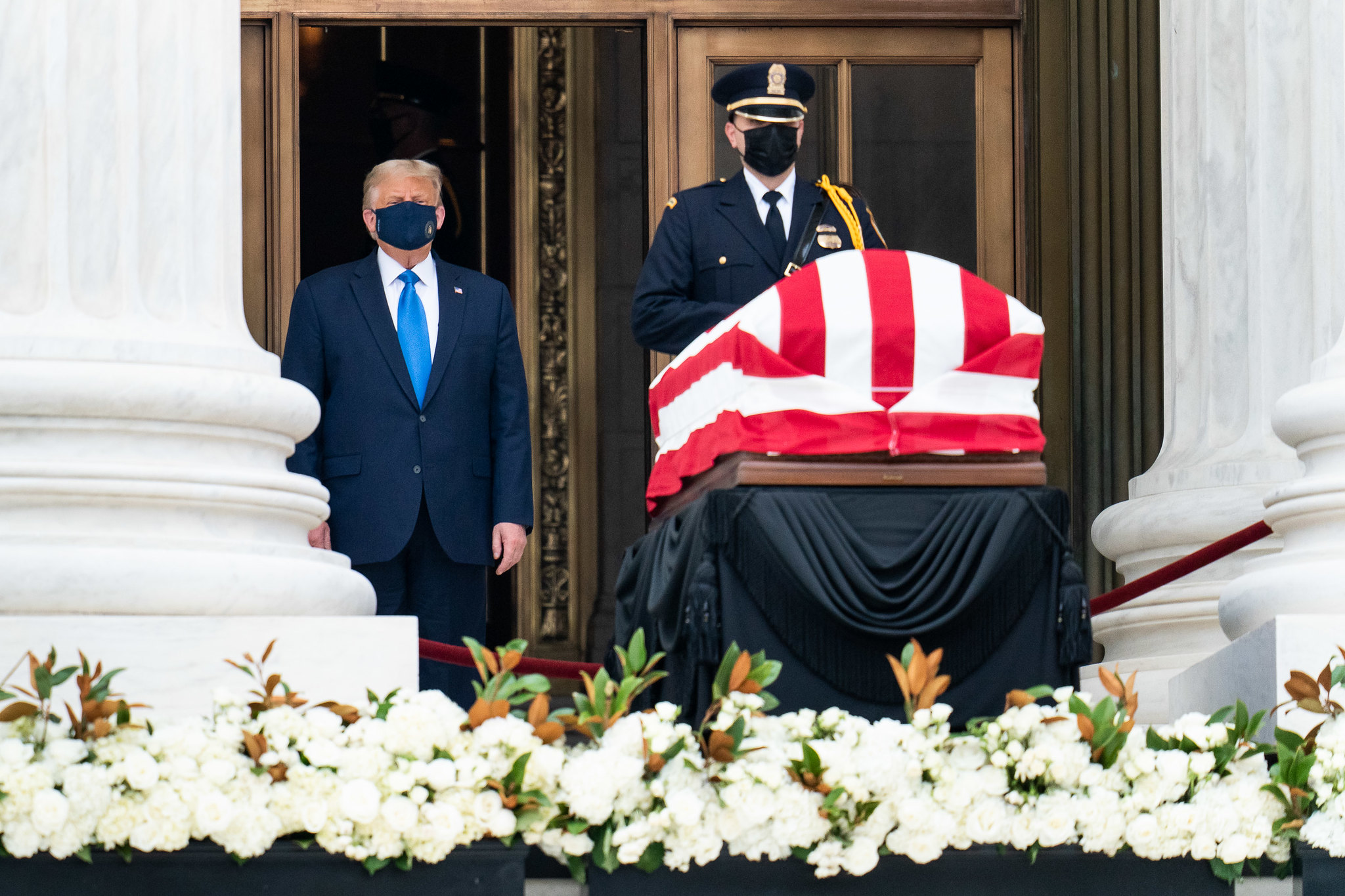 “I eagerly anticipate Judge Barrett’s confirmation, and I look forward to continuing to forge a strong relationship between President Trump and the state of Alabama during his next term,” said Ivey.

All but two Republican senators appear prepared to vote for Barrett’s confirmation, all but assuring her a seat on the court and solidifying a 6-3 conservative majority.

“I am extremely pleased with President Trump’s selection in nominating Judge Barrett to the Supreme Court,” said Sen. Richard Shelby, R-Alabama. “From her clerkship for the late Justice Scalia to her tenure on the 7th Circuit, Judge Barrett has had a distinguished career and has proven her commitment to the rule of law. Our next Supreme Court Justice must be a steadfast supporter of upholding our nation’s Constitution. I have no doubt in Judge Barrett’s qualifications, and I look forward to supporting her nomination.”

Alabama Sen. Doug Jones, a Democrat, has said he will not vote for any nominee until the results of the Nov. 3 election are decided.

“President Trump has nominated a superior candidate for our nation’s highest court. Judge Amy Coney Barrett is a solid constitutional jurist who has distinguished herself both on the bench during her time on the 7th Circuit Court of Appeals, in academia as a law professor at the University Notre Dame and as a clerk for the late Supreme Court Justice Antonin Scalia,” Lathan said. “Judge Barrett’s focus on following the Constitution is apparent in her opinions, in cases ranging from the 2nd Amendment to immigration. Even three Democrat Senators – Joe Manchin of West Virginia, Tim Kaine of Virginia and Joe Donnelly crossed party lines in 2017 to support her first nomination to the bench.”

“A mother of seven, including two adopted children from Haiti, Supreme Court nominee Barrett has been called a ‘powerhouse’ constitutionalist,” Lathan continued. “Her consistent rulings on applying laws to the words of our U.S. Constitution is the exact example of what the justices are tasked with in implementing their rulings. Based on qualifications and experience alone, Judge Barrett’s nomination merits a vote by the full United States Senate.”

“President Trump has made an excellent choice in nominating Judge Barrett to the Supreme Court, and I extend my heartfelt congratulations to her and her family,” Congressman Gary Palmer, R-Alabama, said. “Judge Barrett has a stellar record of faithfully interpreting the law, training young lawyers, producing brilliant scholarship, and upholding the Constitution. Her devotion to her family, and her dedication to her students during her years as a law professor, are also commendable. There is no question that she is highly qualified and will make a fantastic Justice. I urge the Senate to confirm her quickly.”

“I am so excited about President Trump’s nomination today of Judge Amy Coney Barrett to the U.S. Supreme Court,” said Republican Senate candidate Tommy Tuberville. “She understands that’s it’s her job to interpret the Constitution as it’s written and not to manufacture new law from the bench. Her nomination opens the door to protecting unborn life, preserving our Second Amendment gun rights, and securing the religious freedoms guaranteed to us by the Constitution.”

“My opponent, Democrat Doug Jones has a very different opinion,” Tuberville continued. “He’s already announced his opposition to any candidate offered by President Donald J. Trump, and he said even meeting and listening to Judge Barrett would be useless. When it comes to giving fair consideration to President Trump’s Supreme Court nominee, Doug Jones is a lost ball in high cotton. But that comes as no surprise. He voted against Brett Kavanaugh and said he would have opposed Neil Gorsuch if he’d been in the Senate at the time. Democrat Doug even voted twice to remove Donald J. Trump from office. Since becoming our placeholder senator, Doug Jones has opposed everything most Alabamians support and supported everything most Alabamians oppose. Instead of representing our conservative Alabama values, he’s represented the Hollywood and New York values of his high-dollar, out-of-state campaign donors.”

“There’s no telling what kind of dishonest tactics Doug Jones, Chuck Schumer, Kamala Harris and the other Senate liberals will use against a woman who is imminently qualified to sit on our nation’s highest court,” Tuberville warned. “So I’ll close by asking you to join me in praying for Judge Barrett and her family as she faces what promises to be a tough and partisan confirmation hearing. With your prayers and support, America will soon have a strongly conservative Supreme Court, and Alabama will have a new senator who actually represents the citizens of this great state. May God bless Judge Barrett. May God bless President Donald Trump. And may God continue to bless the greatest nation mankind has ever known.”

“I applaud the President for making this nomination now, as the Constitution mandates,” said Congressional candidate Barry Moore. “I’m confident that the Senate will also take up Judge Barrett’s nomination in a timely fashion and not delay the process until after the election. The Constitution doesn’t state anything about waiting until after an election to fill Supreme Court vacancies, despite what the Democrats want us to think.”

“I’m pleased that President Trump has chosen a strong pro-life woman for the Supreme Court,” Moore continued. “I’m also impressed by Judge Barrett’s credentials and experience. I am certain she’ll make an exceptional addition to the Supreme Court, and will serve us well for many years to come.”

“We, as a nation, must act now by praying for President Trump, Judge Barrett and their families,” Moore concluded. “They need to have a shield of favor and protection prayed over them. I truly believe we are in a spiritual battle for our nation and the Democrats will stop at nothing to destroy the character of Judge Barrett, as they’ve done for the last 4 years with President Trump.”

“Judge Barrett clerked for one of the court’s greatest conservative jurists, Judge Antonin Scalia, and she understands that her job is to interpret the Constitution as the founding fathers wrote it, not to invent new law out of thin air,” Ledbetter said. “The suit against Alabama’s strongest-in-the-nation pro-life law is currently working its way through the federal courts, and it could be argued before the U.S. Supreme Court in the near future. Having a conservative majority on the nation’s highest court will be essential to the Alabama Legislature’s efforts to protect unborn life from harm. We encourage the Senate to hold confirmation hearings as soon as possible and to hold an up-or-down vote on Judge Barrett’s nomination immediately after they conclude.”

“The nomination of Amy Coney Barrett to be the next Associate Justice of the Supreme Court is a big win for this country,” said Congressman Robert Aderholt, R-Alabama. “She is a defender of free speech, a protector of the Constitution, and an advocate for the most vulnerable among us. I applaud President Trump for making such a great nomination, Amy Coney Barrett will make an excellent Supreme Court Justice.”

“It is critical to a functioning republic that justices never substitute their policy beliefs for those of properly elected officials,” said Congressman Mo Brooks, R-Alabama. “Judicial activist justices not only betray the Constitution and America when they substitute their own policy beliefs for those of elected officials who are tasked by our Constitution with making American law, they also betray their oaths of office. Amy Coney Barrett has an established record of upholding the Constitution and federal law without inserting her personal political views into her decisions. As such, I look forward to her quick confirmation by the Senate.”

“Amy Coney Barrett was confirmed by the Senate to the U.S. Court of Appeals in 2017. She has already been vetted. She should easily and quickly be confirmed again,” Brooks said. “America’s founding fathers brilliantly created three branches of government, with each being a check on the other two, and each having a defined role. Congress makes law, the Executive Branch implements law, and the Judiciary interprets and applies law. In my view, America is burdened with too many liberal, activist federal justices and judges who fail to abide by their role as limited by the Constitution. I am pleased President Trump nominated a judge who understands the importance of limiting her role to that intended by America’s founding fathers.”

“I applaud President Trump’s nomination of Judge Amy Coney Bassett to serve on the US Supreme Court,” said Trump National Victory Committee Member and former State Rep. Perry Hooper Jr. “Judge Bassett is an outstanding Jurist and a committed Constitutionalist. Judge Basset will be an excellent Supreme Court Justice. Senator Mitch McConnell has a solid 51 Republican Senate votes to confirm. I just hope that the members on the other side of the Aisle will give Judge Barrett a respectfully hearing.”

Vice President Mike Pence said, “President Trump has nominated Amy Coney Barrett to the Supreme Court. She has an unquestionable record as a strong, conservative Constitutionalist who will uphold the rule of law. Unfortunately, the Democrats will no doubt launch a vicious campaign to smear her simply because she was nominated by a Republican President.”

“They’d rather play politics than let the President of the United States do his Constitutional duty,” Pence continued. “But the American People will no longer be silenced by Washington Elites. THIS is the moment we take back our Country.”