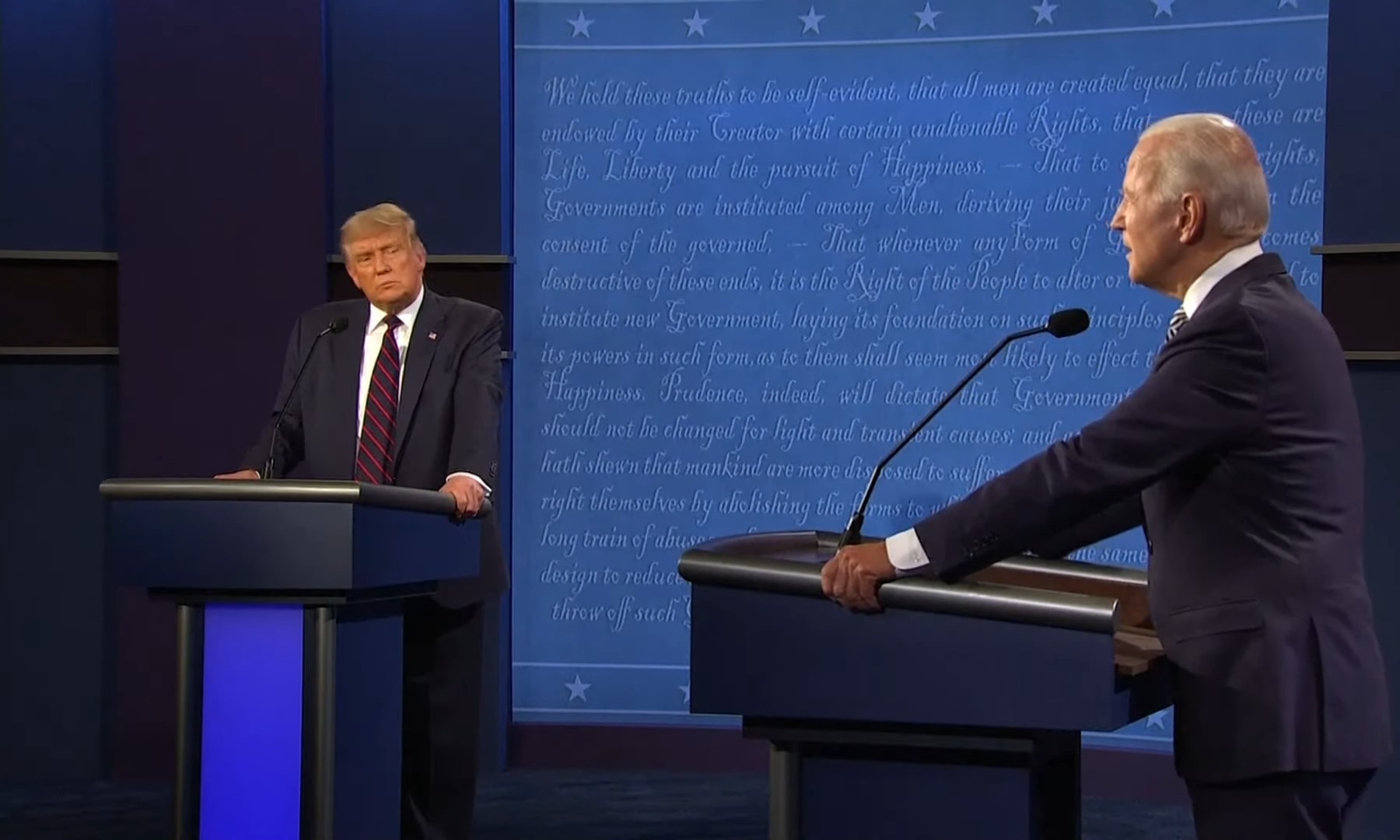 The first presidential debate was held in Cleveland, Ohio, on Tuesday between President Donald Trump and Vice President Joe Biden.

Below are some key moments from the debate. The two candidates bitterly disagreed on what would happen in the election due to the unprecedented amount of mail in election ballots.

Two more debates are planned before the Nov. 3 general election.

“The American people have a right to say who that nominee is,” Biden said. “We should wait and see what the outcome of this election is.”

“Are you going to pack the court, Joe?” Trump asked.

“I am not going to answer that,” Biden replied.

“Your party is socialist,” Trump said of the Democratic health reform plan.

Biden said that the public option was just for those that qualify for Medicaid.

“It is only for people who qualify for Medicaid. The vast majority of the American people would not be in that option,” Biden said. He denied Trump’s charge that the Democratic health care plan was socialist.

“I am the Democratic Party,” Biden said. “The platform is what I say it is.”

“We are going to let our governors go to other countries to buy drugs,” Trump said of his plan to reform health care.

“Everything he is saying tonight is a lie,” Biden said. “He is a liar, everyone knows it.”

“I want to give them better health care at a better price,” Trump said. “Obamacare was not good. We got rid of the individual mandate.”

“He has no plan for healthcare,” Biden said. “Like everything else he is talking about, he does not have a plan.”

On the coronavirus pandemic

“The governors said I did a phenomenal job, most of them said that,” Trump said. “We are weeks away from a vaccine. Therapeutics are already underway.”

“I have spoken to the companies, and we can have it a lot sooner,” Trump said of when the vaccine will be available.

“I have spoken to the scientists, and they will have a vaccine real soon,” Trump said.

“We built the greatest economy in the world. We shut it down because of the China plague,” Trump said. “They have got to open these states up. It is very sad what is going on with divorce and alcoholism.”

“He is going to be the first President in American history to leave office with fewer jobs than when he became President,” Biden said. “You can’t fix the economy until you fix the COVID crisis.”

Trump claimed that he paid millions of dollars in taxes in 2016 and 2017 when asked about a New York Times story that showed he paid just $750 in federal income taxes.

“You are the worst President America has ever had,” Biden said.

“I have done more in 47 months than you have done in 47 years,” Trump replied.

Trump said that Biden was not smart and finished last in his college class.

Biden said that he wanted to raise the corporate tax rate to 28 percent from the current 21 percent.

“You will lose half the companies that poured in and will have the greatest depression you have ever seen,” Trump responded.

“We believe in law and order, and you don’t Joe,” Trump said.

“Violence in response is never appropriate,” Biden said of some Black Lives Matter protests that have turned violent.

“What I support is the police have the opportunity to deal with the problems that they face, and I totally oppose defunding the police,” Biden said.

“Name one law enforcement group that supports you,” Trump said.

Trump when asked if he would condemn racists and white supremacists, said “yes.” But when asked about the Proud Boys, he said that they “should stand back and stand by,” adding a qualifier that most of the problems are coming from the far left.

On who should win and why

“There has never been an administration or a president that has done more than I have done in three and a half years,” Trump said of why he should be re-elected.

“Under this President we have become weaker, sicker, poorer, and more violent,” Biden replied.

“We can get to net zero energy production by 2035 while still creating jobs,” Biden said.

“That is more money than our country could make in one hundred years,” Pres. Trump said of Biden’s environmental plan.

Biden said that he would get the U.S. back into the Paris Climate Accords.