It’s no secret that COVID-19 will make holding an election this November challenging. But for people living with diabetes and other chronic health conditions — many of whom are low-income and people of color — it could mean being forced to choose between voting and survival.

For Alabama, a state with the highest diabetes rate in the country and where two-thirds of all residents have at least one chronic condition, the risk of COVID-19 is credible and dire.

Over the past few months, state officials have created unnecessary barriers that will make it harder and more dangerous for many Alabamians to vote. Not only has the state tried to ban curbside voting, one of the most effective ways for vulnerable voters to safely cast their ballots while avoiding contracting COVID-19, Alabama has also implemented onerous vote by mail requirements that will prevent many already marginalized individuals from participating.

Requiring mail-in absentee ballots be signed by two adult witnesses or a notary public may look simple at a first glance, but during a pandemic, these measures would force many would-be voters to violate social distancing guidelines and put themselves at risk of bodily harm in order to exercise their right to vote.

This isn’t right, and it gets worse when you consider whom these restrictions will impact the most.

Although there’s still much we don’t know about COVID-19, it’s clear that people living with chronic disease are at increased risk.

According to the CDC, Americans with diabetes and other related chronic health conditions are killed by the virus 12 times as often as those without.

Almost all the Americans who have died from the virus so far have had at least one underlying condition, and diabetes is the second-most common condition among U.S. COVID-19 patients.

These numbers are particularly grim for Alabamians because the voters considered most vulnerable to the worst of COVID-19’s effects account for nearly half of the electorate in our state.

That’s why restrictions on safe voting options could be more harmful here than anywhere else.

Worse still, this ultimatum not only forces voters facing heightened health risks during the pandemic to choose between exercising their civic duty and their personal safety, but also effectively disenfranchises low-income Alabamians and people of color.

Nationwide, minority communities are nearly twice as likely to have diabetes as white Americans, and they face higher rates of obesity, heart disease and cancer compared to white peers.

In addition, not only are diabetes rates inversely related to household income, but Alabama is the fifth-poorest state in the union. More than 800,000 Alabama residents live in poverty, nearly half of whom are African American — despite Black residents comprising just one quarter of the state’s population.

This cruel confluence means that in addition to demonstrating a callous disregard for the health and well-being of those most vulnerable to COVID-19’s worst effects, arbitrary voting restrictions will limit the options of Alabama’s low-income and minority citizens writ large.

As a civil rights attorney, I’m troubled by the dilemma Alabamians of color will be facing as they consider whether to vote this November.

Minority Alabamians are still overcoming generations of systemic barriers to health care, which caused the disproportionate chronic disease rates they see today. Punishing them at the ballot box because of these realities isn’t just deeply unfair — it’s undemocratic.

The good news is that there’s still time to ease these restrictions for those who need our help most during this unprecedented public health crisis. If we are going to hold an election that is safe enough for all to vote irrespective of race, income bracket, or health status, we need action from state leaders now.

That’s why I’m calling on Gov. Kay Ivey and Secretary of State John Merrill to do everything in their power to ensure that all Alabama residents are able to exercise their civic duty this November without fear for their health.

The ability to vote safely in Alabama shouldn’t depend on the color of your skin or your socioeconomic status — and we can’t let it. Let’s do better. 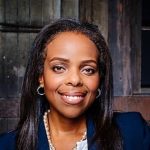 Kira Fonteneau is a civil and discrimination rights attorney in Birmingham, Alabama. She currently serves as President of the Board of ACLU of Alabama and Chair of the American Diabetes Association’s National Legal Advocacy Subcommittee.