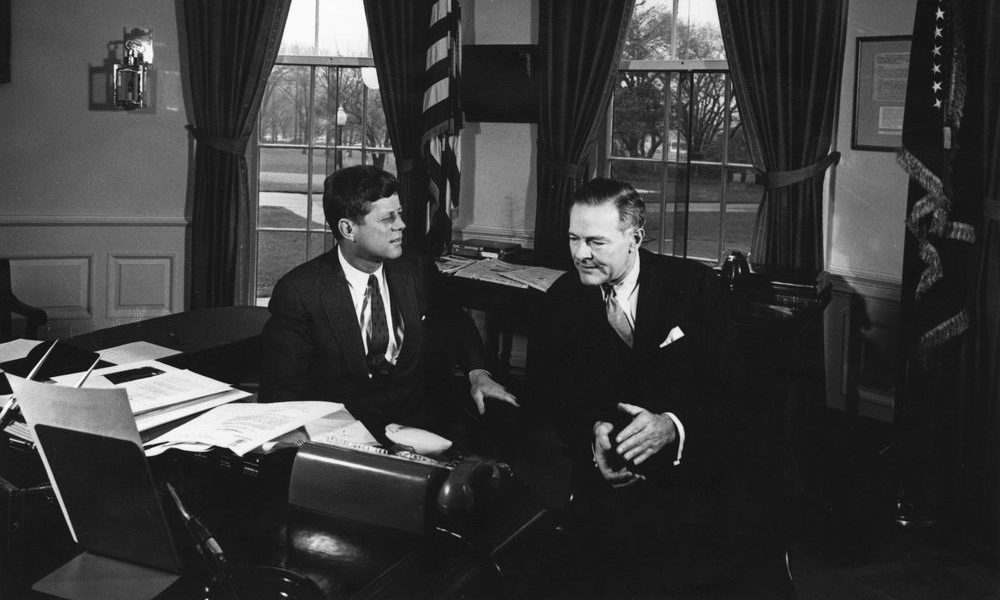 It would have been a show of contrasts and with the election so razor thin, just might have made more of a difference. I’d like to imagine the refined and striking Cabot Lodge gracefully walking on the debate stage and standing adroitly behind the podium, poised and ready for repartee.

The scion of a blue blood Boston family, Lodge was a dedicated public servant having served his country in the House and then in the Senate as his family had done for generations. While he lost his senate seat in 1952 to Jack Kennedy, he continued to serve his country as Ambassador to the United Nations. In this role, he became the embodiment of Eisenhower foreign policy.

In stark contrast, think of Lyndon Johnson, lanky and awkward not especially polished with suits that weren’t precisely tailored. If there was another side of the tracks, that is where Lyndon grew up. The hard scrabble life he embodied, his limited education and his inarticulation was something even the Kennedys described as  “hick” and “cornpone.”

Johnson’s entry into politics was less of a calling to public service and more of a way out of insignificance. In fact, he won his Senate seat by a mere 89 votes. Rumors of fraud haunted him, earning him the nickname “Landslide Lyndon.” Lodge’s entry to the Senate saw him win a decisive vote and any thought of impropriety was unfounded.

But in 1960, Johnson was majority leader of the Senate and not only possessed power but exercised it as absolutely as his mentor Sam Rayburn did in the House. Johnson wielded enormous influence.

Lodge had been in the minority most his entire tenure in the Senate. But he too wielded power, but his power was a mastery of nuances in rules and personal persuasion that allowed him to effectively pass legislation that by its nature was bipartisan. Using rules to impose majority rule is easy since you have the votes.

Johnson’s role as majority leader was to corral his fellow democrats into line and balance the more progressive factions of the party from Northern states with the conservatives from the South. That he did this well is evident in how the senate operated. Lodge’s task was harder; he wasn’t in the majority or in a leadership position and had to gracefully weave and bob through the senate rules and personal relationships to be effective.

If the debate featured questions about military service, Johnson would have been embarrassed. While he wore his silver star lapel pin, the story behind his valor had less to do with action in combat and more to do with political influence.

If competent journalists had probed the record and incident further, they would have discovered that contrary to Johnson’s recitation of his heroism, he had in fact been on the ground in a malfunctioning B-26, when other planes in the same squadron were attacked by the Japanese.

While Johnson was supposed to be an observer on a bombing run over Lae, his plane developed engine trouble and had to return to base.  Somehow Johnson created a myth that he engaged the enemy and took actions of such magnitude that he was awarded the Silver Star. It would have been uncomfortable for sure if the Swift Board Veterans for Truth had their sights on Johnson. Lodge on the other hand had the distinction of being the first sitting senator since the Civil War to resign from the Senate and serve on active duty.

And Lodge’s service was not in the rear echelon, but he was engaged in combat and even captured a German patrol. He went on the assist General Deavers in France and was a liaison officer to the Free French commanding general. Any questions about military service and comparison of war records would have favored Lodge on every level.

For him, active duty meant just that, and his medals and citations were real and deserved. And even after the war, he continued to serve with distinction in the reserves.

While Johnson was classified as a Southerner, he was much more of a populist and new dealer. For a Republican, Lodge was very progressive and did not find many aspects of the new deal to be objectionable.

Probably ahead of his time, he was more of a globalist and understood the need for the United States to be and stay involved in world affairs; foreign affairs was his bailiwick and he had aptly advocated U.S. policy in the United Nations and spared frequently with Russian disinformation.

Johnson was more of a domestic policy man and his view of domestic policy was finding policies that had large price tags that could be implemented to benefit his family, friends, and supporters. Not coming from money, Johnson used his power to create an empire of radio and TV stations that some how escaped effective regulations by the FCC. If Lodge had a self-interest, it was advocating for the United States. And his advocacy wasn’t always appreciated by American allies as when he took the British and French to task over the Suez Canal. Communist countries especially resented Lodge’s unashamed dedication to peace and freedom and his advocacy for stability and against hostilities.

But the one policy that created the starkest and most significant divide was race relations and civil rights. Had there been a debate, the money question garnering the most viewers was when the moderator asked each of the candidates for their position on civil rights.

The question would have been trap for Johnson. He had voted against every civil rights bill during his entire time in federal office. While the Kennedy team pointed to his help in passing the Civil Rights Act of 1957 to assuage liberal constituents, most people knew that Johnson had watered down the bill so much that it was only window dressing and had limited impact.

Lodge was a progressive on race and had supported any number of bills to end discrimination and enforce desegregation. On the campaign trail he even suggested that he was in favor of having a Black man in the cabinet. In fact, it was Lodge who suggested that Ralph Bunche would be a wonderful ambassador to Moscow. This progressive thinking in 1960 was hardly well-received in all quarters.

So, if a debate had taken place, anyone viewing or listening would have seen two different visions of American progress. But the debate didn’t occur, and we can only imagine what might have happened. Funny enough, Johnson’s record on Civil rights was embarrassing to the Kennedy clan; and, while Nixon was a strong supporter of civil rights, he had to distance himself from some of Lodge’s more progressive ideas.

Knowing how close the election in 1960 was and the allegations of voter fraud in Chicago and Texas, had Johnson and Lodge debated, who knows but that election might have had a different outcome.