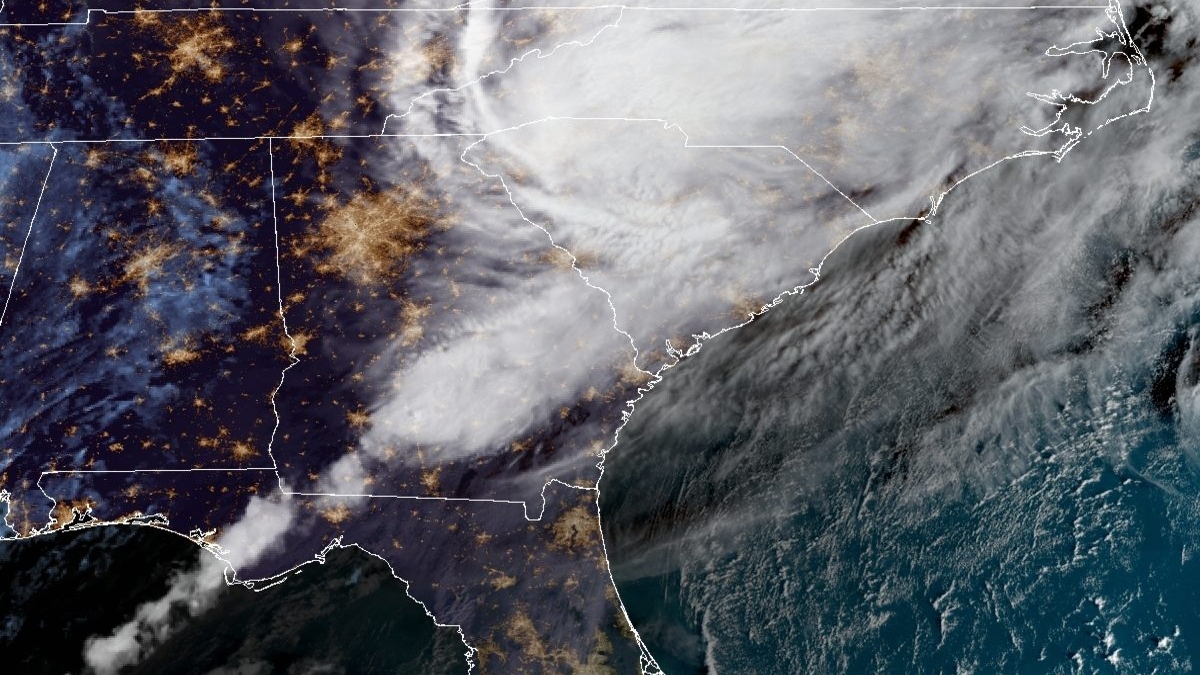 A satellite image of Hurricane Zeta after it swept through Alabama and the Southeast. (VIA NATIONAL HURRICANE CENTER/NOAA)

Wednesday night and into the early morning hours of Thursday, Hurricane Zeta crossed the state. It was a fast-moving storm, which limited rainfall totals, but much of Alabama experienced tropical storm force winds.

Trees are down across the state, and many people do not have power this morning. State officials will be out this morning assessing how bad the damage is.

The state was still recovering from Hurricane Sally, which made landfall near Gulf Shores in September, and now it appears that Hurricane Zeta has left its own disaster area. This has been the most active hurricane season on record with dozens of named storms.

“At first light, our storm team will actively assess and respond to outages. #HurricaneZeta continues to move through Alabama, bringing tropical storm force winds. At this time, there are 494,000 outages across the state,” Alabama Power wrote on Twitter.

The storm surge from Hurricane Zeta was worse in some places than forecasters anticipated.

ABC 33/40 meteorologist James Spann said, “As expected, we experienced a high impact, widespread wind event across Alabama last night and early this morning as Tropical Storm Zeta moved through. Winds gusted as high as 76 mph across Central Alabama, knocking down thousands of trees.”

There are trees down on homes, cars, across roads and on power lines. First responders and power crews are out on the roads working so motorists need to slow down and be patient.

Alabama Power said, “Reminder: If you see any downed lines, don’t assume they are de-energized and maintain a safe distance.”

A lot of people are going to be doing a lot of work in the next several days on the cleanup and a lot of chain saws are going to be used, many operated by people who are not normally chainsaw operators. The Alabama Emergency Management Agency warns them to avoid making the situation worse by having accidents.

“After a hurricane, danger often remains, especially for cleanup workers. Chainsaws are one of the most dangerous power tools used during cleanup. Always wear proper safety equipment, learn to safely operate the saw and keep it in good working condition.” [Here’s more information on that.]

In addition to the downed power lines, fallen trees and debris on the roads there is also local flooding conditions that motorists need to be aware of.

The National Weather Service Office in Mobile said on Twitter, “Water levels are quickly falling in some locations, but are slow to fall in other locations along the coastline of Mobile Bay and along the Mississippi Sound. Conditions are slowly improving. #Zeta.”

The power outages mean that many traffic lights are out in the state. If you don’t need to go out, don’t, and if you do need to go somewhere, give yourself more time to get there and slow down. First responders are busy enough helping people with the weather-related emergencies, they don’t need to have to drop that to deal with avoidable accidents on the roads or rescuing some motorist who drove into floodwaters.

The Baldwin County Emergency Management Agency said on Twitter, “Do your part to keep a 1st responder safe – stay off the roads until after daylight and then only travel as necessary. Many road hazards are hidden to drivers until it is too late.”

Atlantic hurricane season runs through the end of November.