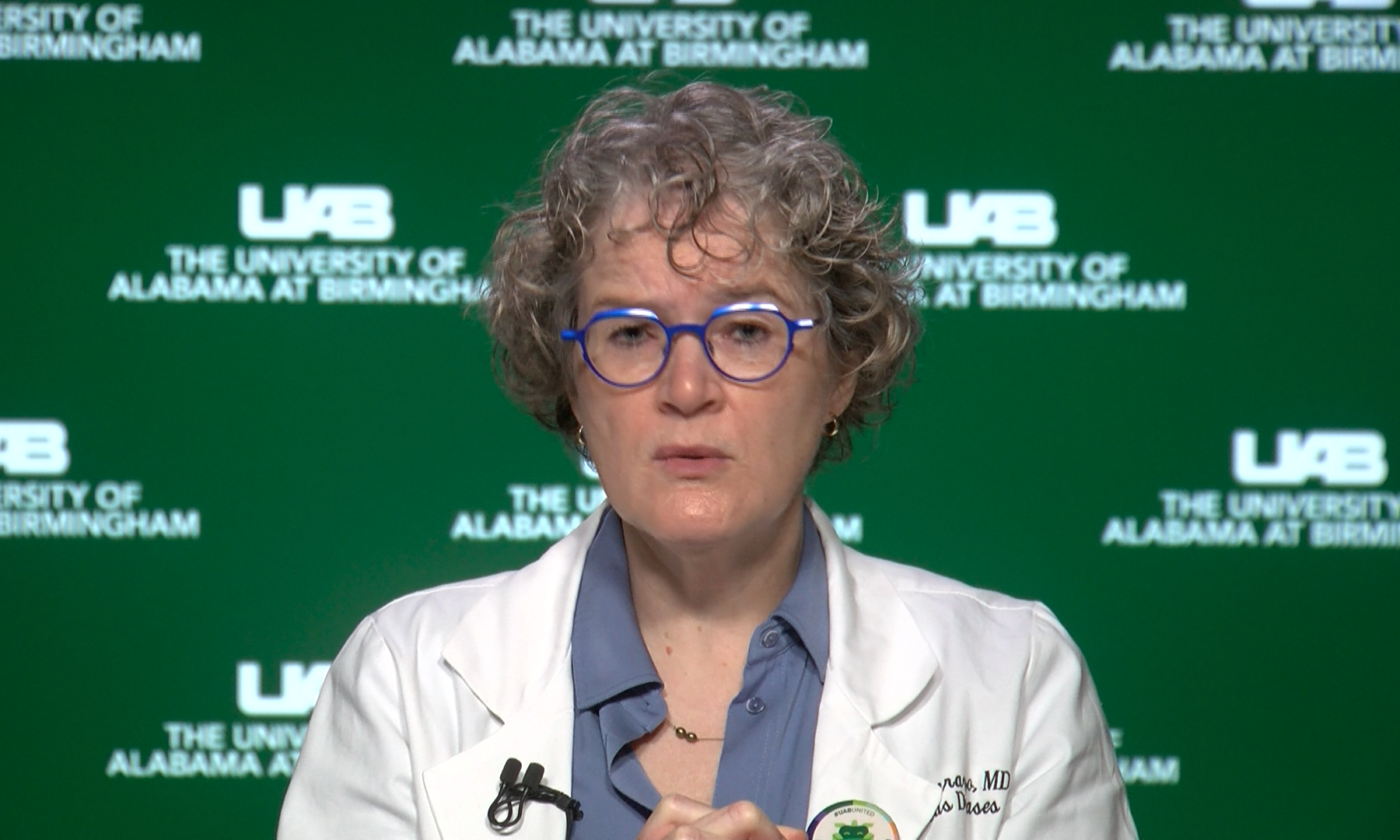 Alabama is seeing a surge in COVID-19 cases, hospitalizations and deaths, according to the doctor who leads UAB’s infectious disease division, and she urged the public to wear face masks and practice social distancing or the numbers will worsen — just as the year’s busiest holiday season nears.

Alabama added 2,070 coronavirus cases on Wednesday, and the state is averaging 1,551 new cases each day this week, a 65 percent increase from a month ago. The state has added 16,916 new cases in the last two weeks, a 27 percent increase over the previous two-week period.

The state’s hospitals were caring for 1,210 COVID-19 patients on Wednesday, the most since Aug. 18, and the number of available intensive care beds in Alabama hospitals Tuesday was at its lowest point since early August. The seven-day average for daily hospitalizations on Tuesday increased 26 percent compared to three weeks before.

“[In] August — when we were seeing that post-July 4 peak — we had 1,500 people hospitalized, and we were getting very, very anxious at that point,” said UAB’s Dr. Jeanne Marrazzo, director of the hospital’s infectious disease division, speaking to reporters Wednesday. “So I am quite concerned that we could be heading in that direction.”

ADPH reported 81 additional COVID-19 deaths on Tuesday, the largest single-day of reported deaths since the start of the pandemic. Some of those deaths, 29, appear to have occurred in August, nine in September and two in October. All told, at least 61 people have died from COVID-19 statewide since Nov. 1, though data from the past two to three weeks is incomplete and the death toll is likely to increase.

ADPH in October began publishing the dates on which people died from the virus, as opposed to just the date the department confirmed the death, as had been the practice. It can take many weeks for ADPH workers to confirm a death as having been caused by COVID-19.

What’s happening in Alabama is happening in states across the country, Marrazzo explained, and it’s all the more concerning as holidays approach and people are desperate to see their families.

“I’ve heard of clusters of cases now where the attack rate is astonishing in people who have been in the same room, particularly restaurants, gyms and bars and churches,” Marrazzo said, adding Thanksgiving poses a real risk because those who may not have symptoms can still carry the virus to their family gatherings.

The U.S. on Tuesday had a record number of new daily COVID-19 cases — just shy of 140,000 — and 1,347 deaths, according to the COVID Tracking Project. On Tuesday, nearly 62,000 people were currently hospitalized with COVID-19 nationwide, the most recorded since the beginning of the pandemic, according to the COVID Tracking Project’s historical data.

“So we’ve come a long way in many ways, but we are definitely slipping back down that precipice, which is not a very good feeling,” Marrazzo said, adding that unlike previous outbreaks in some states, the virus’s spread now is happening all over the country.

“There are not very many places that are being spared right now,” Marrazzo said.

Also troubling is that Alabama’s rising cases are happening at a time when testing isn’t being done in larger numbers, Marrazzo explained.

“We’re still averaging only about 7,000 tests a day,” Marrazzo said. “And in fact, yesterday, despite that number of cases, there were only 4,138 tests reported, so if you look at our testing rate in the state, we are probably not testing as much as we should be.”

There are several reasons for that, Marrazzo said, including people may not know where to get tested, and some who’ve been in contact with a person who tests positive with the virus and who doesn’t have symptoms themselves may believe they don’t need to be tested. Despite having no symptoms, a person can still have the disease and spread it to others, she said.

Testing numbers could also be low because all facilities conducting rapid point-of-care tests may not be turning in that data to the Alabama Department of Public Health, Marrazzo said. It’s a problem ADPH has publicly discussed, resulting in several “data dumps” of older test results.

“So when I say we’re not testing enough, there are some caveats there, but really, I would like to see us be back at least at the 10,000 rate and ideally above,” Marrazzo said.

[Testing sites across the state can be found on our testing dashboard here.]

Marrazzo explained that it is possible to turn things around without having to lock down segments of our society again, but it will take the public’s willingness to wear masks and avoid large gatherings.

“We can head off these dire consequences with methods that can be done with, yes, discomfort, pain, isolation, but hopefully not as much as what happened previously,” Marrazzo said.

Asked how she would combat the mentality that some have, since most people who contract the virus won’t die, Marrazzo said, “If 90 percent of people survive the virus, what’s the big deal? The big deal is if you’re not in that 90 percent.”

Statistics are good at characterizing population and describing community-level events she said, but when you or someone close to you is impacted “statistics do not matter to you at that point whatsoever.”

“Not to mention all the people whose lives have been turned upside down by having the virus and making it through,” Marrazzo said. “We haven’t even talked about the post COVID syndromes that we’re seeing.”

UAB Hospital has set up a clinic for people experiencing the long-term effects of COVID-19, which can include fatigue, brain fog, persistent breathing discomfort, chest pain and anxiety, Marrazzo said.

“That survival rate does not comfort me at all, and I think we need to do a better job describing to people that the consequences of this infection go way beyond that number,” Marrazzo said.

Speaking on Ivey’s decision last week to relax occupancy rules for businesses and restaurants, Marrazzo said the people who make those decisions are in a “very unenviable position.” Ivey last week also extended her statewide mask mandate through Dec. 11.

“I think Governor Ivey supporting the mask mandate so consistently throughout the last several months has undoubtedly kept us from being in a situation like Utah, which is in a very bad place,” Marrazzo said. “That said, there has been attention to the economic viability of many of the places that we would like to go, like restaurants, and also to our desire to socialize, and to get out and to try to have some social health, so it’s a balance.”

The challenge is being able to do those things safely, and Marrazzo said she thinks that can be done, but she’s concerned about the current state of coronavirus in Alabama.

“I would feel better about that happening if our numbers were declining. Unfortunately, we’re loosening those restrictions just as those trends that I’ve been talking about for the last half hour have been going up,” Marrazzo said, adding that it all comes down to personal responsibility.

“Governor Ivey can tell you whatever she or I think you should do, but if you don’t take that seriously, and you don’t take each of your own actions and your own contexts, and make a responsible judgment about what you’re doing, then it doesn’t matter anyway,” Marrazzo said.