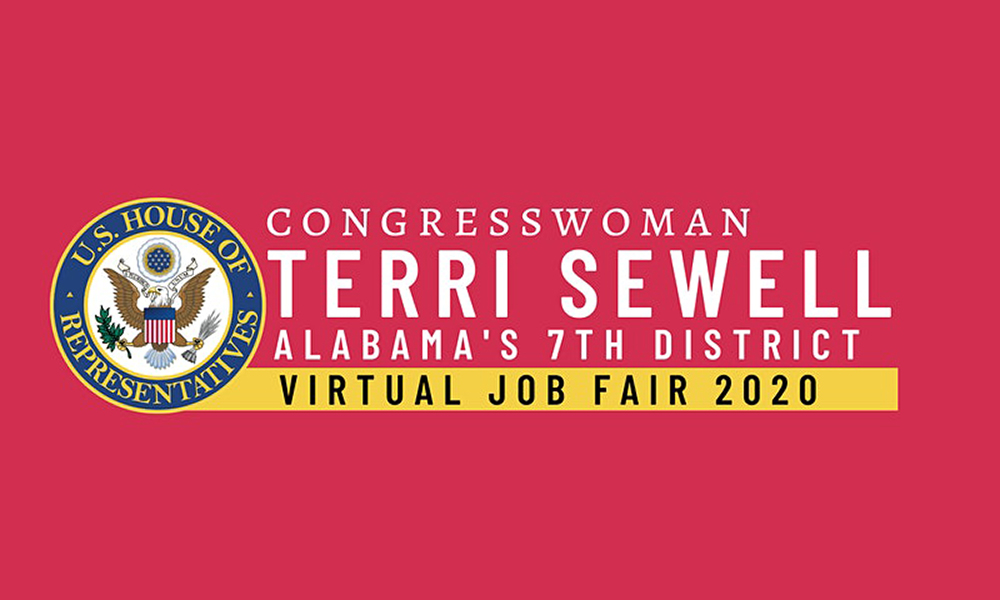 Congresswoman Terri Sewell’s annual job fair is open for registration. This year, the job fair will be virtual, hosted via Zoom.

Sewell announced the opening of registration for Alabama’s 7th District 9th Annual Job Fair. Job Fair 2020 will be a two-day event held virtually on Wednesday and Thursday, Nov. 18 and 19, from 10 a.m. to 6 p.m. central time.

Job seekers will have the opportunity to connect with employers from 10 different industries. Registration is required via Eventbrite. Participation in the job fair is free and open to the public.

“Since the COVID-19 pandemic, I know so many jobs have been lost, and now more than ever our annual Job Fair is needed,” Sewell said. “For the past 8 years, the Job Fair has been a space for job seekers in Alabama’s 7th Congressional District to connect directly with employers. We are very excited to continue our tradition with a robust 2020 virtual program! Over the course of two days, job seekers can learn about jobs available right NOW in Alabama.”

This year’s virtual event will feature employers from more than 10 types of industries, including automotive, restaurant and food management, transportation and construction, hospitality and retail, health services, utilities and telecommunications, manufacturing and production, staffing agencies, government agencies and law enforcement.

Sewell said she made a commitment to work to improve the lives of people in the 7th Congressional District when she was elected. Getting people jobs and growing the economy of the district has been the goal of the job fair.

That rate is now down to 6 percent — still double the national average but a tremendous improvement for the people in the district. Then COVID hit.

Sewell said that the district, like the rest of the country, was hard hit by the coronavirus crisis and many jobs, particularly in the hospitality sector, were lost.

Sewell said that they don’t have as many employers participating in this year’s job fair as in some in the past but it is “still a great opportunity.”

“We have a pretty good track record,” Sewell said. According to surveys, 25 to 30 percent of participants in past job fairs found jobs through the Job Fair, Sewell’s office said. Since that is dependent on participants responding to the surveys, they suspect the number is higher.

“We do have very strong participation from all the largest employers in the state,” Sewell said. There are opportunities there for people with a variety of skill sets.

Sewell said that she is very proud of all of the investments that have been made by manufacturers in the 7th Congressional District and cited the expansions at Hyundai and Golden Dragon in Wilcox County.

“We have a very good track record,” Sewell said of past job fairs. “Everywhere I go I meet people who tell me how their lives changed because of our job fairs.”

On Nov. 3, Sewell was elected to her sixth term in the U.S. House of Representatives.