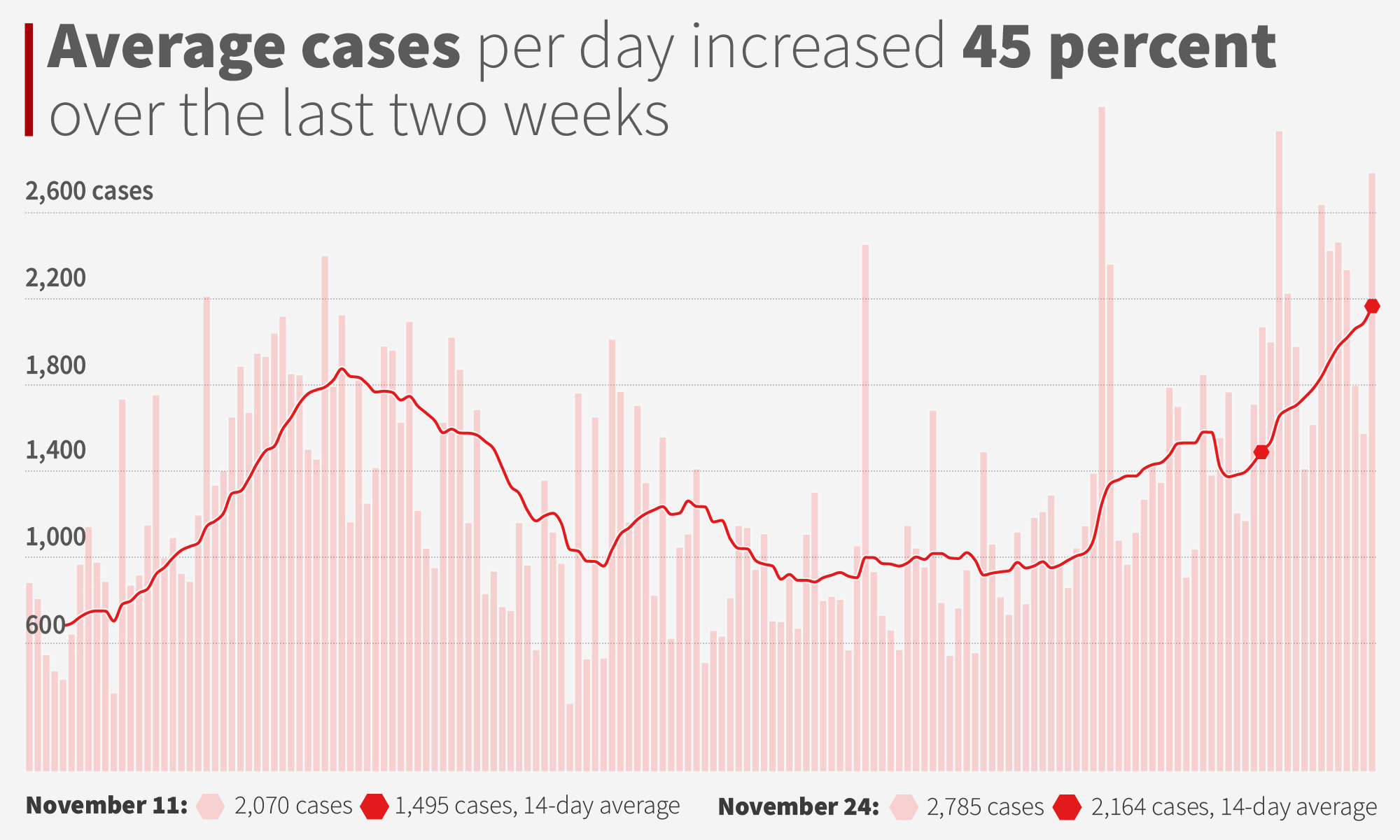 The state added 2,785 cases Tuesday, less than 200 under the Nov. 13 record of 2,980. While the Alabama Department of Public Health on Oct. 23 reported 3,852 cases, 1,287 of those were older positive antigen tests conducted in June through October and submitted by a facility in Mobile, which skewed that day’s count higher.

The state’s seven and 14-day averages for new daily cases were 2,288 and 2,164 respectively on Tuesday, and the average percentage of tests positive over the last two weeks was 22 percent — more than four times as high as public health experts say it needs to be to guarantee cases aren’t going undetected.

Coronavirus hospitalizations in Alabama on Tuesday reached 1,428. That’s as high as they’ve been since Aug. 11. Huntsville Hospital was treating a record 270 coronavirus patients on Tuesday.

Dr. Kierstin Kennedy, UAB’s chief of hospital medicine, told reporters Monday that hospitals are seeing much higher numbers both because of the influx of COVID-19 patients and non-coronavirus patients.

“We are definitely seeing the highest numbers that I’ve taken care of in my almost 10 years of being a hospitalist here,” Kennedy said.

Kennedy and other medical professionals in recent days have urged the public to take precautions during Thanksgiving and other upcoming holidays or risk spreading the disease further by infecting themselves or loved ones.

Dr. Racheal Lee, UAB’s hospital epidemiologist, said Monday that Alabama’s positivity rate is so high that if 15 people gather there is between a 30 and 50 percent chance that one in the group has COVID-19 and could be without symptoms.

“If we think about that, 15 doesn’t sound like a lot of people, and that may be a small gathering for some, but we really need to remind ourselves that a lot of people are asymptomatic before they’re symptomatic,” Lee said.

The Alabama Department of Public Health suggests that to cut disease transmission over Thanksgiving hold small dinners with only those living in your own household, have virtual dinners with those outside of your household and shop online rather than in person for Black Friday deals.

“What I have heard is that we should expect some of the highest numbers actually in the third week of January, because of all of this commingling and intermingling of families,” Kennedy said.  “It’s incredibly important right now to maintain your bubble, to wear your mask, maintain distancing and wash your hands.”