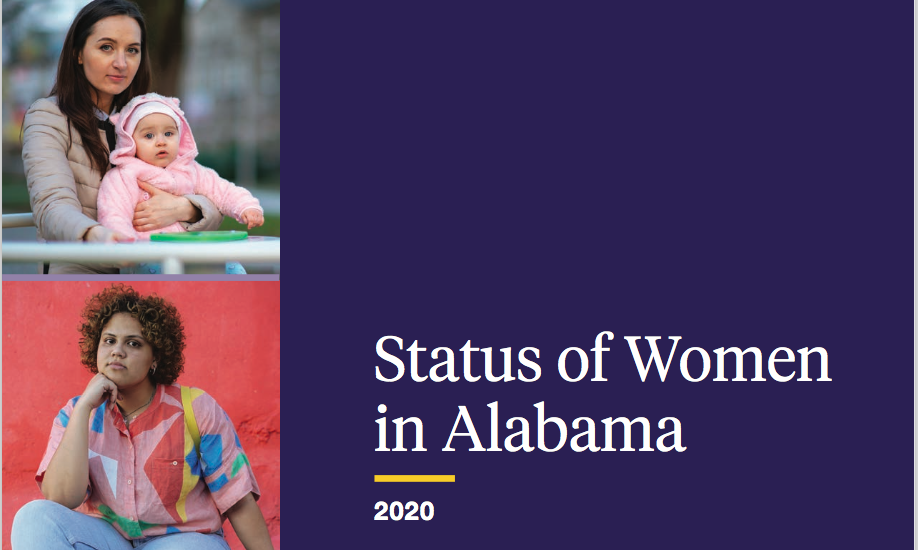 Researchers didn’t set out to establish a baseline that could be used to later examine what impact COVID-19 is having on women in Alabama, but that’s what happened when the Women’s Fund of Greater Birmingham set out in the fall of last year to examine the challenges facing women in the state.

The resulting report, released Wednesday and titled “Status of Women in Alabama: 2020” was compiled with the help of researchers at the Washington D.C.-based Institute for Women’s Policy and Research and focuses on four areas: work, earnings, and family; poverty and opportunity; health and well-being; and political representation and leadership.

The report shows women in Alabama faired worse than women nationwide in terms of the wage gap and percent of women living in poverty, but that women in Alabama are entrepreneurial and are heavily relied on as their families’ main source of income.

The report also briefly notes the impact COVID-19 is having on each of the parameters studied, but it will be some time before data is available to further that research.

“When women thrive, Alabama thrives,” the report’s executive summary begins. “When barriers for women are removed, their success extends to their families, our economy, and the state as a whole.”

Melanie Bridgeforth, president and CEO of the Women’s Fund of Greater Birmingham, a nonprofit philanthropic foundation that advocates for women and girls, told reporters during a press briefing Wednesday that you cannot change what you don’t know.

“And so we felt strongly that by producing responsible and credible data that illuminates gaps and benchmark progress, we can also help make a difference and improve the status of women in Alabama simply by shining a light,” Bridgeforth said.

Elyse Shaw, a study director at the Institute for Women’s Policy Research, said during the briefing that women’s earnings are no longer optional for families.

Women in Alabama earn just 73 cents for every dollar that men earn, compared to the U.S. as a whole, where women earn 82 cents on the dollar, according to the report.

“If the current trend continues, Alabama women will have to wait until the year 2089 to reach pay equity,” the report reads.

Even with the wide wage gap, women’s earnings in Alabama are relied on to keep households afloat. The share of Alabama women who are breadwinners, meaning all single women and married women who earn at least 40 percent of household income, is 74.2 percent. Black mothers with children under 18 in Alabama make up 77.9 percent of breadwinners.

“The earnings of Black mothers are vital to their families, and they’re more likely to be in the jobs that have been hit hardest by this economic recession,” Shaw said.

One of the bright spots the report found was the entrepreneurship among Alabama women, who make up 37 percent of the state’s business ownership, compared to 36 percent nationally, Shaw said. One in four women in Alabama have a bachelor’s degree or higher, the report found.

“So women in Alabama are out there, starting businesses, stepping forward and really supporting themselves and their families,” Shaw said.

The COVID-19 pandemic is having dramatic impacts on the ability of women to earn incomes, and Black people are disproportionately impacted, the report notes. In August unemployment was 5.6 percent in Alabama, and of the unemployment claims, 57.3 percent of claims were made by women and 53.5 percent of claims were made by individuals who are Black.

The report largely uses data that was compiled by state and federal agencies well before the COVID-19 pandemic began, Shaw explained, so it will likely be another year before they’ll be able to see data that reflects COVID-19’s true impact on Alabama women.

“This will be our baseline data,” Bridgeforth said of the 2020 report.

Bridgeforth said that the nonprofit plans to put out a new report every two years, and that they expect they might see in the next report is “the literal flattening of our childcare industry. Folks who have lost jobs or going back into jobs where there are unstable or stagnant wages.”

“I’m amazed when people say that COVID has caused so much,” Bridgeforth said. “COVID has merely shone a light and illuminated and exposed broken systems that were already there.”

“You do have that baseline now to then compare as the years go on,” Shaw said. “And you see not only what is the impact of COVID, but what are the repercussions that ripple down the years.”

In this article:COVID-19,featured2,Women's Fund of Greater Birmingham

COVID hospitalizations are down, but new daily cases remain high, and two hospitals are out of monoclonal antibody treatments.