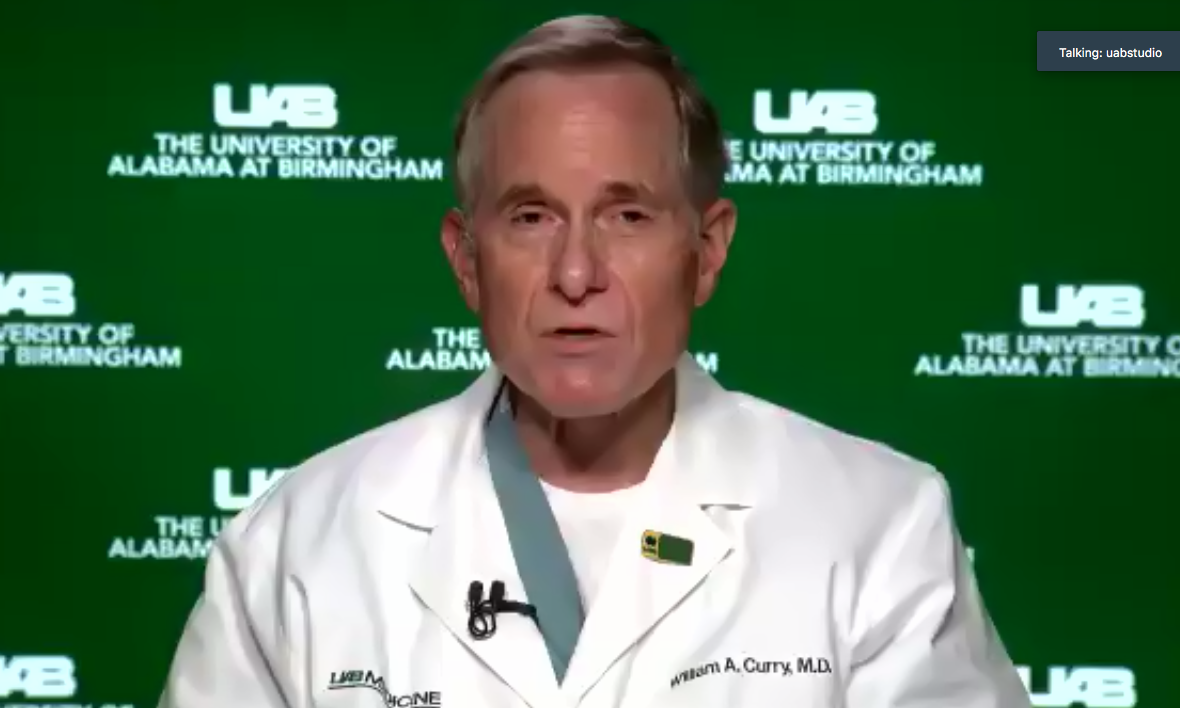 The number of people in Alabama hospitals with COVID-19 hit another record high on Monday as the state sees an ongoing, worrisome rise in cases that shows no sign of abating soon.

Dr. William Curry, a primary care physician and the associate dean of UAB primary care and rural medicine, told reporters Monday that COVID-19 is spreading much more rapidly in the state’s rural areas than in Alabama’s larger cities.

“We are really under a lot of stress to healthcare systems at every level, from our smallest rural hospitals and health systems and clinics, all the way up to the university hospital,” Curry said. “We are stretching capacity, both in terms of space and personnel, to be able to provide the care that we need.”

COVID-19 hospitalizations statewide reached 2,286 on Monday, a 32 percent increase from two weeks ago and 41 percent more than was hospitalized at the peak of Alabama’s summer surge in hospitalizations on Aug. 6. The Huntsville Hospital System had a record 439 coronavirus patients on Monday.

The state reported an increase of 2,264 cases on Monday, averaged 3,667 cases each day over the last week and has reported 48,371 cases over the last two weeks. To compare, the most cases recorded over a two week period during Alabama’s summer surge was 26,220 on July 24.

Over the last two weeks, Alabama has averaged 37 new reported COVID-19 deaths each day. The record high was an average of 38 deaths over a one week period, set on Sunday. Since the start of the pandemic, 4,102 Alabamians have died from coronavirus.

Testing remains low as well. Alabama’s positivity rate over the last week was 35 percent. Ten of Alabama’s counties over the weekend had positivity rates higher than 45 percent, Curry said. Public health experts say that rate needs to be below 5 percent or cases are going undetected.

“And of those 10, seven of them are entirely rural and the other three are mostly rural,” William said, adding that those counties are in North Alabama, which is now seeing a faster pace of the disease than the state’s metro areas.

Curry described the challenges of providing testing and medical care for COVID-19 in the state’s rural counties, many of which have no hospital and few other medical facilities.

“There are not enough testing sites available often enough, long enough, in order for people to get tested,” Curry said.

Additionally, there remain many rural areas where, because of the demand and the capacity of laboratories there, it’s taking a week or more to get test results, Curry said.

“Although that’s better than no result, perhaps, in terms of making a clinical decision for somebody, a week is not helpful,” Curry said.

“Some doctors’ offices will provide it, but they’re not enough doctors offices or clinics in the state to vaccinate 4.5 million people in a fairly short period of time, so having access sites is important,” Curry said. Work is underway to partner with various medical facilities, emergency management agencies, fire departments and fire colleges to help ensure rural areas get vaccines in a timely manner, he said.

Access to vaccines in rural communities will increase as the other vaccines, which do not have the same ultracold storage requirement, will begin rollout in the weeks ahead, Curry said.

According to the Alabama Department of Public Health’s plan, the first shipments of the vaccine will be administered to front-line hospital personnel, clinical staff and emergency medical services at greatest risk from coronavirus. Nursing homes are to begin receiving vaccines in the second week.

State health officials and infectious disease experts this week have pleaded with the public to wear masks, socially distance and avoid gatherings over Christmas with anyone outside of your household. It will be many months before vaccines are widely available to the public, and in that time, thousands more could get sick and die.

Speaking to the trepidation some may have about taking the vaccines, Curry said the process to approve the vaccines through the FDA hasn’t been rushed, but the decision to begin manufacturing the vaccine early on, well before approval, has made the rollout happen so much quicker than how vaccines have been developed in the past.

“I plan to get my vaccine as soon as I can if that helps you make your own decision,” Curry said.

The Alabama Board of Medical Examiners and the Medical Licensure Commission over the weekend adopted emergency rules to allow qualified physicians from other states and Canada to apply for temporary emergency licenses to treat COVID-19 patients in Alabama hospitals. Curry said the doctor shortage is most severe in rural areas.

“Some areas are not quite as bad off as others, but there are very few rural counties in Alabama that are not either entirely or partly classified as medically underserved areas by the federal definition,” Curry said.