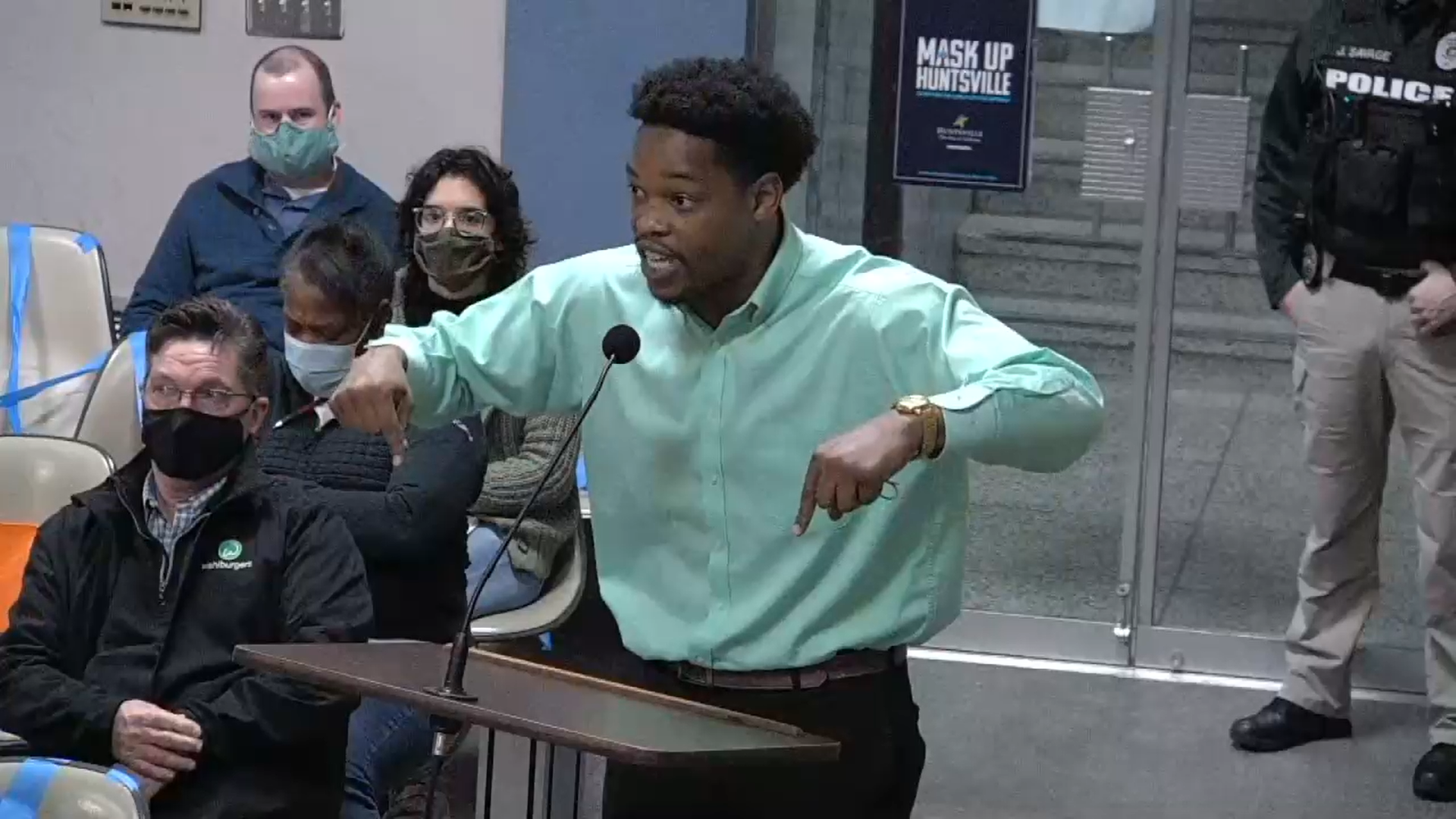 Dantraeon Calvert’s voice became louder as he addressed the Huntsville City Council last week, having just described how he watched a police officer tackle a woman on Dec. 13.

“I am here once again because of breach of trust with the public — in my neighborhood, where I live,” said Calvert, 29.

His previous appearance was related to the use of less-lethal munitions by police against nonviolent protesters in Huntsville on June 3. That incident is under review by the Huntsville Police Citizens Advisory Council, which may have a report ready in March, according to one city official. In lieu of its findings, city leaders have refused to publicly discuss any steps to change the way the Huntsville Police Department operates.

Calvert said last week that he understood that there is an internal process for investigating the incident and ended his comments with a forceful demand for “solutions” and “results.” Several city council members expressed having some desire to take action, with each acknowledging that the existing process for review should be allowed to play out.

Council President Jennie Robinson, whose district is in the predominantly white south side of the city, reiterated several times that a process exists for complaints of police misconduct.

“There’s a process, Mrs. Robinson, but I don’t understand whether people are going to learn anything from this collectively — our heart of Huntsville,” said Council Member Frances Akridge.

Council Member Devyn Keith, who represents District 1 in the predominantly Black north side, said he has been stopped by police four times since he was elected in 2016, and has been detained in handcuffs twice. The review process needs to work as intended, he said, so that the council can determine if it is sufficient to address community complaints.

For many in Huntsville, it’s an all too familiar refrain. The council avoids making an assessment of a grievance from community members while it waits for the HPD to review the actions of its officers — a process that critics say can drag on with no timeline, lacks transparency around what it decides and why, and is unfriendly to people who make complaints.

The complaint process is one target of the reform package put forward by the Citizens Coalition for Criminal Justice Reform. A main point of contention is that officers’ actions are evaluated by superiors who determine only whether they followed procedural rules or not. Angela Curry, who founded CCCJR, questioned whether colleagues in the same department can be trusted to side with a citizen over a fellow officer if it is warranted.

The CCCJR list also calls for a Citizen Complaint Review Board made up of residents who reflect the city’s diverse racial demographics. That would provide residents an alternative to going to the police after a negative experience that involved police in the first place.

These proposals weren’t discussed or mentioned at the meeting, although Keith alluded to a future reevaluation of the incident review process if its outcome regarding the Dec. 13 incident is deemed unsatisfactory.

It isn’t that the proposed ideas are bad, according to Council Member Bill Kling.

“This is the caliber of stuff that cities will pay an outside consultant tens of thousands of dollars for, and here’s a lay citizen with some very good ideas that I think we’ll certainly be giving an extremely serious review,” he said.

Kling said he plans to form a committee that includes Curry and other members of CCCJR sometime in the near future to discuss things further. The mayor and council want to wait for the HPCAC to complete its review before making any decisions about the police department.

In the meantime, the committee could hammer out any issues with the list of proposals to make sure they comply with federal and state protections for employees, Kling said. He wants to be ready for when the council has received and considered the HPCAC report.

“I’d like to have some ideas and have some things in my hip pocket so that after that’s come out, within a short period of time I can have some recommendations that have already been formulated to the full city council for adoption — hopefully adoption,” Kling said.

That is what concerned residents want, Curry said: a resolution or set of resolutions that provide citizens with recourse to hold police accountable and to influence procedures and policies that may contribute to negative interactions.

Curry described the recorded incident as nothing out of the ordinary.

“For me, this is typical HPD behavior,” she said. “Like they’re comfortable in that they don’t care that they have an audience. This is just how they function.”

She said she didn’t understand how police protocol can allow for an officer to arrive at a scene “to then just take over the scene, and coming in hot and aggressive. It just doesn’t — this can’t be proper protocol.”