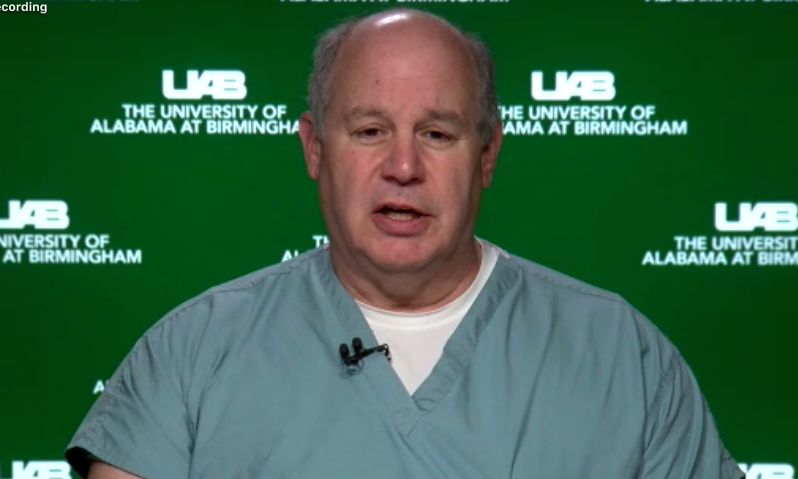 Alabama hospitals are seeing an “unprecedented” number of COVID-19 patients, an infectious disease expert at UAB said Tuesday, when the state set yet another COVID-19 hospitalization record and saw more new cases in a single day than ever before.

“What we’re really concerned about right now is what is going to happen in the week, especially the second week, after Christmas,” Dr. Michael Saag, an infectious disease expert and a professor and associate dean at UAB’s School of Medicine, told reporters on Tuesday. “And if we all collectively have the same type of exposures that we did over Thanksgiving, we can expect a doubling of the cases that we have now.”

UAB Hospital has been adjusting intensive care bed capacity to care for the rush of COVID-19 patients by taking over other areas of the hospital, Saag explained.

“So far we’ve been adept at doing that, but it’s just common sense. At some point, if cases keep coming to us in increasing numbers, to the point where it becomes more difficult to flex, all of us could become more strained and stressed in terms of providing the care,” Saag said, adding that some other hospitals may not have that same ability to adjust any longer.

“We could end up in a situation like Los Angeles is in right now, where for the first time in the U.S. I heard the term rationing care,” Saag said. “That’s a scary term, but what that means is that in L.A. right now, they’re having to consider approaches that if somebody who’s in the ICU on a ventilator, they may have to take that person off a ventilator based on their underlying condition and put somebody else on.”

Having to make those kinds of life or death decisions due to the inability to provide care to all is what the world saw happen in Italy earlier in the pandemic, Saag said.

“I pray that that doesn’t happen anywhere in Alabama, but I can’t tell you that it won’t, especially if we all aren’t working together to stop the epidemic,” Saag said. “The hospitals, the doctors, the health care providers. We can only do so much.”

Alabama’s COVID-19 hospitalizations reached a record 2,527 on Tuesday, and have grown 45 percent so far this month.

The state added 4,979 new COVID-19 cases on Tuesday, which was the largest single-day increase in cases since the start of the pandemic, when taking into account backlogged test results that artificially inflated Alabama’s case count Friday. The state’s seven-day average of daily cases broke 4,000 for the first time on Tuesday, reaching 4,040.

Testing remains low statewide as well. Alabama’s average positivity rate over the last week was a record-high 41 percent, according to APR‘s tracking of new cases and reported tests over the past two weeks. Like APR, many other COVID-19 tracking projects calculate the state’s percent positivity by dividing the 7- and 14-day averages of daily case increases by the 7- and 14-day averages of daily test increases.

Public health experts say the percent positivity should be 5 percent or below or there’s not enough testing and cases are going undetected.

The Alabama Department of Public Health calculates the positivity rate differently, instead dividing the number of daily cases by the number of individuals who have been tested, rather than the total number of tests done, as some people may have more than one test performed.

There are no federal standards on how states are to report COVID-19 testing data, and a myriad of state health departments calculate positivity rates differently.

Saag encouraged people to get vaccinated as soon as they’re able, to help turn the tide of the surging pandemic. He received his first shot of the Pfizer vaccine on Sunday, and said over the next several months, vaccines will become more widely available to a greater segment of society.

“What that’s going to mean for us is an end of the pandemic, perhaps as soon as the summer, and certainly by Thanksgiving and Christmas next year, if we all participate in the vaccine program, but we’ve got to make it till then,” Saag said.

Saag asked the public to reconsider Christmas plans, to stay home and refrain from gathering with those outside of their own households.

“A universal story is a patient comes in and they say ‘You know, I thought I was being really careful and I was, up until the holiday and then I’ll let my guard down and now I’ve got this’,” Saag said. “And I can speak for every one of the patients that I’m seeing in saying that it’s a scary experience. Nobody. Nobody wants to go through this.”