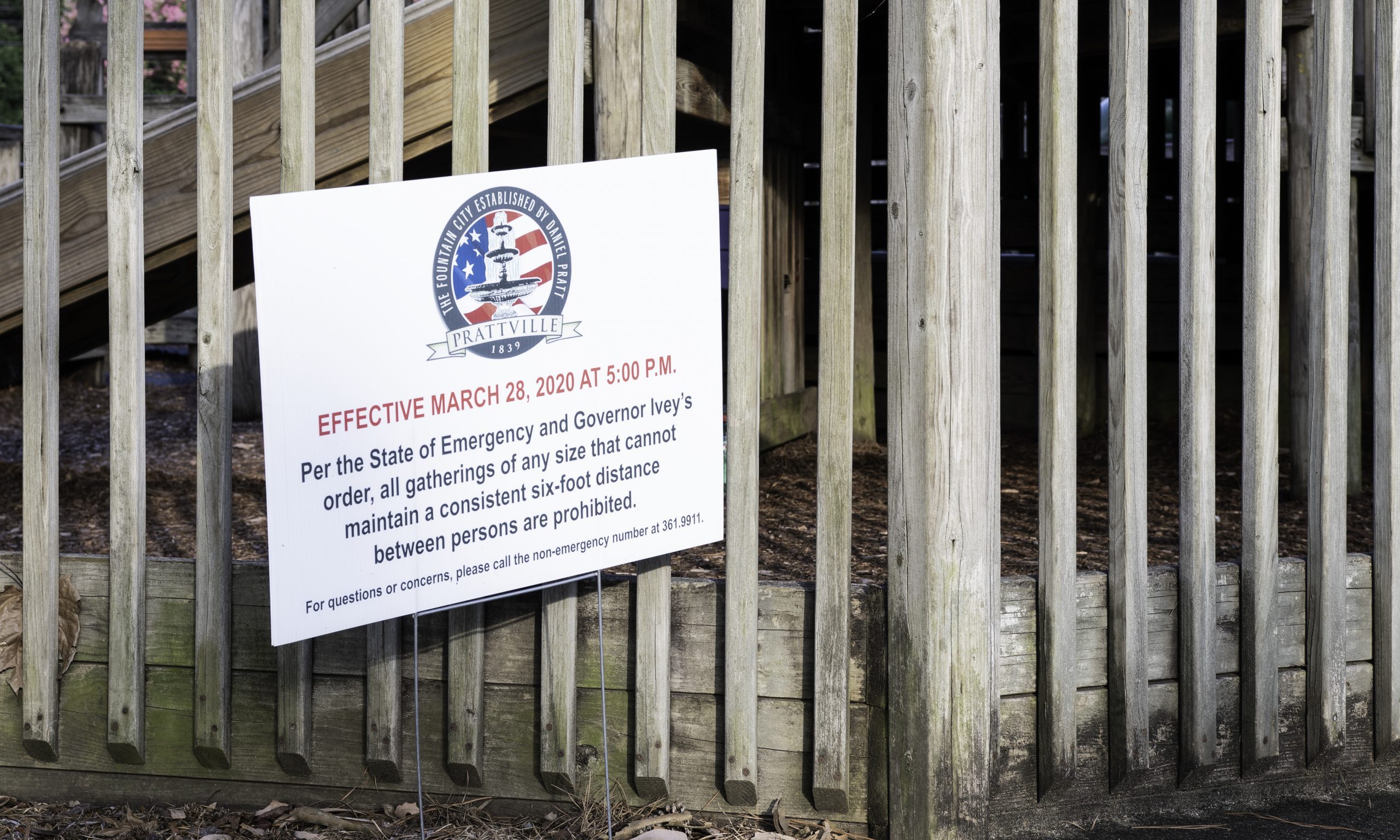 A sign regarding social distancing at a playground during the COVID-19 pandemic in Prattville, Alabama, in July 2020. (STOCK)

It will not be hard to say goodbye to 2020. In a year in which we have said goodbye to so many people and so many norms, it will be quite easy to slip into another year with cautious hope for better days. But before we do, we should look back on the stories that affected us over the past 12 months.

It is quite obvious what the top story is, but despite the overwhelming, all-encompassing awfulness that was COVID-19 on America, other stories held the spotlight in this state as well.

The coronavirus has dominated headlines and our lives since its arrival in the U.S. early in 2020. From daily updates of cases to stories about stimulus deals and government assistance, there has been an endless amount of stories about this virus and its effects on everyday Alabamians.

And it doesn’t appear that will soon change. Over the final weeks of 2020, headlines have been dominated by the rollout of COVID vaccines, and by the worst spikes yet in cases, hospitalizations and deaths. In less than a year, more than 300,000 Americans have died from COVID, with more than 4,500 deaths in Alabama alone.

In the midst of a global pandemic, a national reckoning also occurred in America, as millions of Americans took to the streets to protest racial injustices. The flashpoint was a video of George Floyd being murdered by a Minneapolis police officer, who knelt on Floyd’s neck for more than nine minutes as people nearby pleaded with the officer to move. Floyd’s death came on the heels of other incidents, and they followed years of complaints and a growing mountain of video evidence showing police officers across America routinely mistreating and even murdering Black men and women.

In Alabama, those protests mostly focused on the removal of long-standing Confederate monuments. For a red state that has taken great measures to protect such monuments through legislation, the removal and relocation of several monuments was swift and decisive.

There also was an ugly scene in Huntsville, during which Huntsville police and Madison County Sheriff’s deputies tear-gassed a peaceful crowd simply because command officers feared what might happen after dark. Those fears mostly appeared to be tied to unverified — and ultimately thoroughly debunked — social media threats.

The rise of Tommy Tuberville

On the back of Donald Trump and football, an unexpected novice rose to one of the highest positions in American politics. Former Auburn coach Tommy Tuberville, who has lived in Alabama only sporadically over the last 15 years, and who moved back just weeks prior to qualifying, somehow managed to beat ALGOP household names Jeff Sessions, Bradley Byrne and Roy Moore and then beat incumbent Democrat Doug Jones to become Alabama’s junior U.S. Senator.

Making his ascension even more remarkable — or embarrassing, depending on your politics — was the fact that Tuberville never truly staked out a position on any issue, relying instead on simply supporting Trump on all matters. He flubbed simple questions on issues such as the Voting Rights Act, racism, the three branches of government and basic American history, and he also ducked debates with all challengers.

Before taking office, Tuberville has already been a lightning rod for criticism from both sides of the aisle. He publicly said he’s considering joining Brooks and challenging the election of President-elect Joe Biden, though he has repeatedly failed to provide any evidence of fraud or wrongdoing to support his intended actions.

Such inhumane behavior isn’t outside the norm for ADOC, as a new Department of Justice lawsuit detailed. That lawsuit, which Attorney General Steve Marshall complained caught the state off-guard, was the result of a four-year investigation into Alabama’s prisons by DOJ investigators, who routinely provided the state with reports of findings and other updates. What they found is what we all knew they’d find — an underfunded, understaffed, under-humane set of prisons that would make a third-world country blush. That lawsuit will likely result in Alabama’s prisons going into receivership and the federal government completely controlling them.

To somewhat rectify our prison situation, Gov. Kay Ivey has a plan to build three new super-prisons. That plan will cost more than $2 billion and will bypass the state Legislature. It is not very popular.

After more than four years and countless legal arguments, former Alabama House Speaker Mike Hubbard is finally serving his prison sentence. He did not take the usual path to get there. Unlike most convicted felons, Hubbard was allowed to remain free on bond until his appeals were exhausted, and he ran out the clock on all of them. The Alabama Supreme Court eventually overturned half of his 12 felony convictions, and Lee County Circuit Court Judge Jacob Walker also cut Hubbard’s sentence from four years to just over two years.

But in the end, Hubbard went to prison for abusing his powers and misusing his public office for personal gain. His imprisonment has likely changed nothing about the political ethics of state lawmakers.