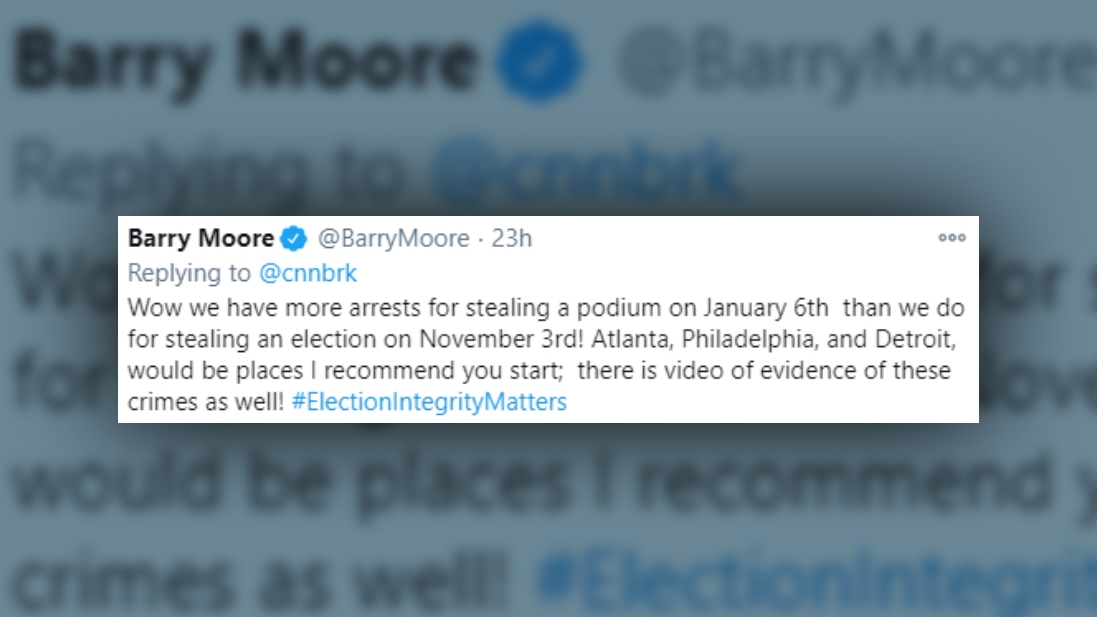 Alabama Congressman Barry Moore, a Republican, deleted his Twitter after being suspended.

Congressman Barry Moore, R-Alabama, on Sunday had his personal Twitter account suspended, and then he deleted his account, after two tweets he made regarding the deadly attack on the U.S. Capitol drew criticism.

Moore’s chief of staff, Shana Teehan, told WSFA on Sunday that Twitter suspended Moore’s personal account, and that she did not know why, according to the news station.

According to screen captures of the tweets by longtime Capitol Hill journalist Jamie Dupree, Moore equated the violent Capitol insurrection with discredited allegations of widespread election fraud, suggesting that people should be arrested in majority-Black cities for “stealing” the election:

“Wow we have more arrests for stealing a podium on January 6th than we do for stealing an election on November 3rd. Atlanta, Philadelphia, and Detroit, would be places I recommend you start; there is video evidence of these crimes as well! #ElectionIntegrityMatters”

Barely an hour after I pointed out a pair of tweets about the US Capitol attack made by Rep. Barry Moore R-AL, the Alabama Republican deleted his personal Twitter account @barrymoore.

In this one, Moore made light of one of the arrests from the attack.https://t.co/fspR6MROzW pic.twitter.com/0hFkQ9b1Du

Before his account was suspended and deleted, Moore also tweeted in reference to the death of Ashli Babbit, 35, who was shot by a Capitol Police officer when she tried to crawl through a broken window inside the Capitol during the siege:

“@mtgreenee @NARAL I understand it was a black officer that shot the white female veteran . You know that doesn’t fit the narrative,” Moore tweeted Saturday. The tweet has since been deleted, but it has been archived by Pro Publica’s Politwoops project.

Moore didn’t answer APR‘s questions about those tweets directly, but Teehan sent APR a statement from Moore on Sunday afternoon.

“Lawlessness is not the answer to our nation’s problems, and every person who acts unlawfully is responsible for their own actions and should be held accountable to the full extent of the law, whether that’s Black Lives Matter, Antifa or Wednesday’s rioters,” Moore said in the statement.

At least five people, including Capitol Police Officer Brian Sicknick, have been killed related to the siege. Another Capitol Hill police officer, Howard Liebengood, who responded to the attack, died Saturday off duty, marking the second Capitol Police officer death since Wednesday. Police did not release his cause of death.