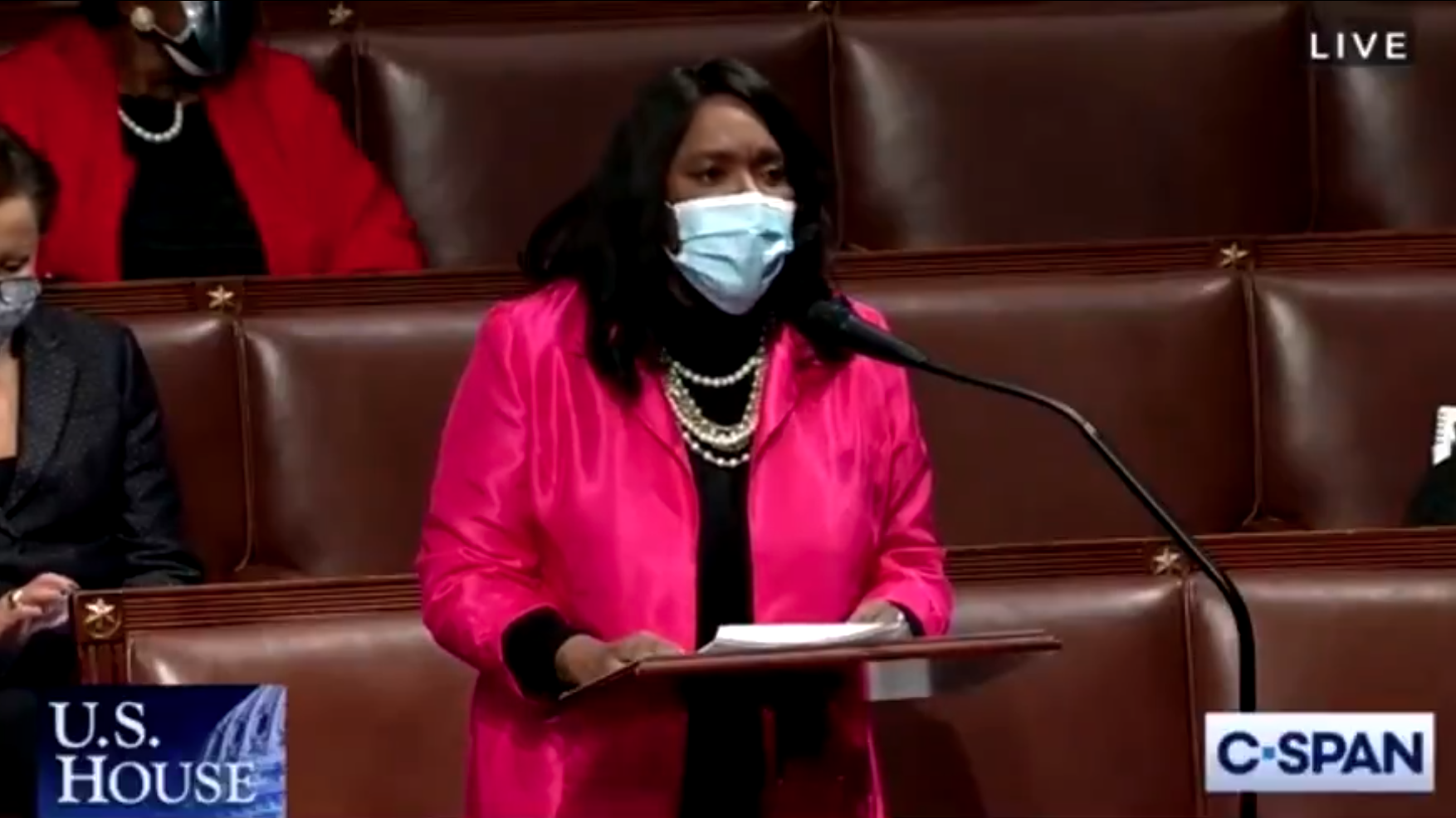 Congresswoman Terri Sewell, D-Alabama, speaks on the floor of the U.S. House of Representatives during a debate on impeaching President Donald Trump in January 2021. (VIA CSPAN)

For the first time in U.S. history, the House voted to impeach a president for a second time. Ten Republicans joined Democrats in voting to impeach President Donald Trump on Wednesday, charging him with inciting an insurrection.

No Republicans voted to impeach Trump during his first impeachment. Wednesday’s bipartisan vote signaled widespread concern over Trump’s actions leading up to, during and after the deadly Capitol riot that has left at least five dead. All of Alabama’s Republican congressmen voted against impeachment, while Rep. Terri Sewell, D-Alabama, voted for the resolution.

Senate Majority Leader Mitch McConnell, R-Kentucky, this week left the door open for a Senate conviction — which would be another first in U.S. history — but the Senate vote likely won’t happen until after President-elect Joe Biden takes office.

“The President bears responsibility for Wednesday’s attack on Congress by mob rioters. He should have immediately denounced the mob when he saw what was unfolding,” said House minority leader Rep. Kevin McCarthy, R-California, speaking on the House floor before his vote, saying that he was against impeachment. He voted as such.

“Some say the riots were caused by antifa. There’s absolutely no evidence of that, and conservatives should be the first to say so,” McCarthy said.

The attack on the Capitol left one Capitol Police officer dead and one Trump supporter, who attempted to enter a broken window inside the Capitol, shot and killed by police. Three others, including an Alabama man, died from “medical emergencies” while on Capitol grounds.

Trump told the crowd of supporters assembled before the Capitol riot: “We will never give up. We will never concede. It doesn’t happen.”

“If you don’t fight like hell you’re not going to have a country anymore,” Trump told the crowd, and towards the end of his speech Trump encouraged his supporters to march to the Capitol.

“We’re going to walk down to the Capitol and we’re going to cheer on our brave senators and congressmen and women, and we’re probably not going to be cheering so much for some of them,” Trump said.

Speaking Tuesday during a visit to Texas to a section of the border wall with Mexico, Trump denied any responsibility in the deadly riot.

“The impeachment hoax is a continuation of the greatest and most vicious witch hunt in the history of our country and is causing tremendous anger and division and pain, far greater than most people will ever understand, which is very dangerous for the U.S.A., especially at this very tender time,” Trump said.

Trump declined to immediately tell his supporters to stop the rioting last Wednesday, but did eventually address the rioters that afternoon, telling them in a video message to “go home” and “We love you. You’re very special.”

“President Trump betrayed his oath of office by seeking to undermine our constitutional process, and he bears responsibility for inciting the insurrection we suffered last week. With a heavy heart, I will vote to impeach President Donald J. Trump,” Rep. Peter Meijer, R-Michigan, said in a tweet before his vote to impeach.

Rep. Terri Sewell, D-Alabama, spoke before her vote about being on the House floor when rioters broke into the Capitol.

“I rise today to support impeachment. I do so with a heavy heart and a lasting and searing memory of being in this gallery, the people’s House, right up there, fearing for my life,” Sewell said, pointing to where she and other representatives hid from rioters during the siege. “And why? Because the President of the United States incited others to be violent. A mob of insurgency, in this House. It’s unacceptable, it led to the killing of five Americans.  Blood is on this house. We must do something about it. I ask we move from ‘stopping the steal’ to to healing, but healing requires accountability, and everyone must be accountable.”

The President of the United States incited a violent insurrection that led to the deaths of five Americans. Blood is on this House. We must do something about it.

I will be voting to impeach President Trump for incitement of insurrection. pic.twitter.com/wSFaMXLi2B

Rep. Barry Moore, R-Alabama, was the only other Alabama representative to speak before the vote, and said he asked his staff Wednesday morning how many U.S. presidents have been impeached in history.

“They said up until this president, only two times in our nation’s history,” Moore said. “So here we are, seven days left in his first term, and we’re going to impeach a president. For what reasons? For what reasons? There have been no hearings. There have been no committees. We must defend the right and protect the process of impeachment. If we pursue this, from now on, from this day forward, impeachment will always be a political process. I asked my friends across the aisle, they always talk about healing. Healing. How do we come together as a nation?  Since 2016 there has been hashtags going around that said ‘not our president. Resit, resist.’ Members across the aisle have said things in public to have supporters of this president attacked and demeaned.”

The Senate could vote to bar Trump from running for and holding federal office in the future.