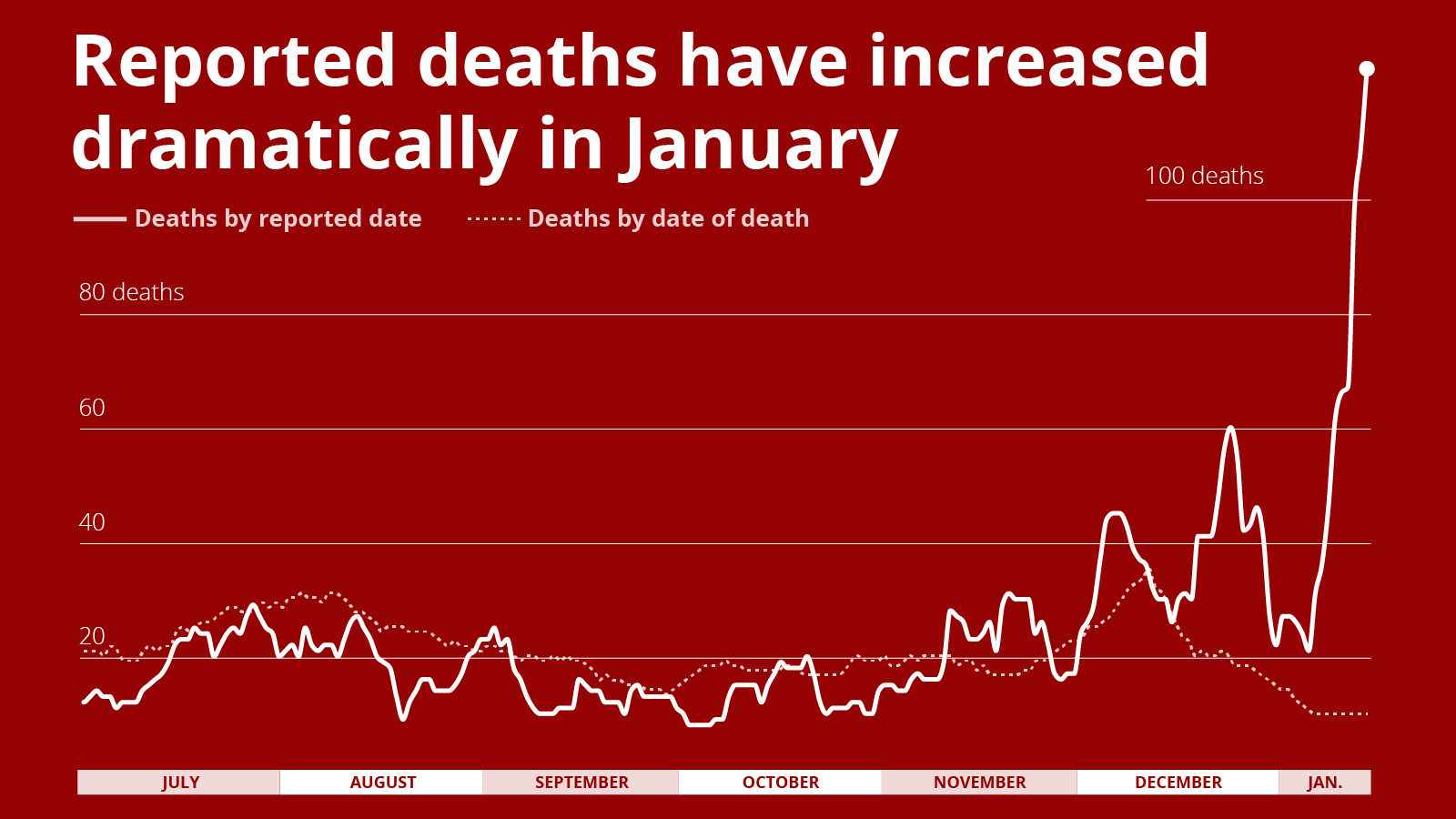 The Alabama Department of Public Health has reported 598 COVID-19 deaths over the past three days, one of the highest three-day totals since the pandemic began. But many of those deaths happened weeks, and even months, ago — evidence of the work ADPH is doing to ensure all deaths caused by the disease are counted.

Despite the common myth that many COVID-19 deaths are of people who didn’t actually die from the disease, the opposite is often true. The death toll is likely an undercount. The Alabama Department of Public Health since Nov. 11 has been working to make sure those who died from the disease, or from illnesses brought on by it, are properly classified as such.

At least 5,945 people have died from COVID-19 in Alabama as of Thursday, according to ADPH.

At least 792 Alabamans died from COVID-19 in December, making it one of the deadliest months since the start of the pandemic, and as new deaths are reported, the total is likely to grow.

It takes some time for ADPH to review medical records and verify a death is caused by COVID-19, and the department reports deaths in two ways: In the first, the death is reported on the day ADPH confirms the death as being from the disease. In the second, ADPH reports the date on which the death actually occurred. Confirmation can take weeks, or longer.

“Generally, we would expect COVID to be listed on the death certificate, but that might not necessarily be the case,” said Dr. Karen Landers, assistant state health officer at ADPH, speaking to APR recently. “So it is possible they could still be determined to be a COVID death as a result of comorbidities that were triggered or made worse from the viral infection.”

The CDC and the CDC’s National Notifiable Diseases Surveillance System guidelines state that 30 days after a COVID-19 diagnosis a person is presumed to have recovered, which means that if that person were hospitalized for more than 30 days and dies, it’s possible that their death won’t be classified as from COVID-19 by the workers who input that data into the system.

ADPH has a team of workers who review those databases and medical records to determine if a death was in fact due to COVID-19, or medical complications as a result of the disease. That team includes a primary care physician who handles the adult cases, an OB-GYN who reviews cases of pregnant women and Landers herself, who deals with deaths of juveniles, Landers said.

Landers said those staff members are going back through death certificates and medical records and looking to see if the person did have COVID at some point, and what role that might have played in their death.

“We made this commitment under Dr. Harris’s direction that we would look very meticulously at each one of these because, again, it’s still a learning process about this virus,” Landers said, referring to Alabama State Health Officer Dr. Scott Harris. “It is extremely important for us to be accurate in terms of the data so that we can capture, what is the mortality rate, why did people die from COVID-19 and what are the contributory factors to COVID-19?”

Landers dispelled an often-mentioned myth that there’s money to be made by incorrectly identifying deaths as COVID-19.

“We’re not gonna get paid any more money in the Alabama Department of Public Health for one death or 10 deaths,” Landers said. “Data accuracy is important from the standpoint of knowing, okay, how deadly is this disease?”

Dr. Jeanne Marrazzo, director of UAB’s division of infectious diseases, told APR last month that during recent shifts at the hospital she learned of a patient who came in with severe COVID-19 pneumonia in late November and progressively worsened, requiring ICU care.

“They continue to deteriorate. They get what we call ARDS or adult respiratory distress syndrome,” Marrazzo said. “They’re in the unit for another 10 to 12 days,  then, like many people who are persistently on the ventilator they get what’s called a nosocomial pneumonia.”

“So now you’re taking care of somebody who’s in an intensive care unit. They’re getting multiple antibiotics. They can get complications from the antibiotics that we can’t prevent, and you are now trying so hard to keep them going, and hopefully alive,” Marrazzo said.

The hope is always that someone will improve and be released before the 30-day timeline, Marrazzo said, but hospital stays of more than 30 days are not uncommon.

“What if on January 2 they have a cardiac arrest, or they have an episode of septicemia or septic shock from an infection that they acquired as a consequence of being so sick and in the ICU?” Marrazzo said. “That COVID diagnosis that drove them into the hospital so long ago, may not show up on their death certificate, and so attributing deaths to COVID is going to be a real skill, as we look at this surveillance from these databases.”

“So Dr. landers is absolutely correct,” Marrazzo said. “And it’s another reason that I think the toll of this pandemic on our families, our communities, everybody, is really not going to become clear until we’ve had a chance to get our heads above water and go back and look at some of these sources.”

ADPH in a statement on Tuesday said the department continues to review a large number of deaths.

“At this time, two-thirds of the deaths have been reviewed and ADPH expects this will take a few more weeks to complete. This may result in additional death numbers which are historic and do not reflect recent mortality due to COVID-19,” the statement reads.